Eat! Eat! You look so thin! 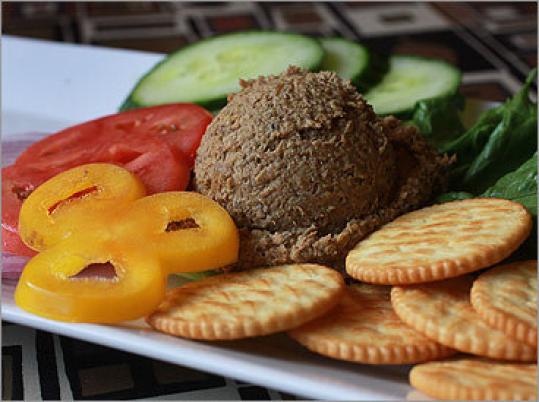 So what am I — chopped liver? Hard to resist this old Borscht Belt line when you’re schmearing the popular spread onto crackers multiple times over the course of a few weeks.

Many Jews who don’t usually eat chopped liver find it on their plates during the New Year’s season. For those who don’t make it themselves, the Boston area is home to several delis where it is possible to indulge such holiday-induced cravings.

Chopped liver (and all the attendant jokes) isn’t the only staple on the American Jewish table. Don’t forget matzo ball soup and the classic Reuben. If you want to judge a good home cook, sip her soup. If you want to see if a delicatessen knows what it’s doing, order a Reuben.

We set out to sample these dishes at four locations: Zaftigs Delicatessen and Rubin’s Kosher Restaurant Delicatessen, both in Brookline; Barry’s Village Deli in Waban; and Maxie’s Delicatessen in Stoughton. No one restaurant clearly triumphs at all three dishes, though each establishment has its strengths. A visit to any of them promises a cultural immersion.

A traditional Reuben consists of six elements: corned beef, sauerkraut, Russian dressing, Swiss cheese, and rye bread, all grilled until the cheese melts, with brown mustard served on the side. At Zaftigs, the corned beef is soft and succulent, and owes as much to its presentation as it does to its flavor. Unlike the tightly packed wad found in many sandwiches, Zaftigs gently layers its thinly sliced brined meat in a loose, airy weave. The appealing technique might result in less beef, but the lower density better showcases its tenderness. Dressing, sauerkraut, and Swiss are as good here as anywhere else, which is to say unremarkable. These ingredients varied imperceptibly, if at all, from deli to deli, which is too bad. Greater variety would allow for more distinctive interpretations of this classic.

Large pieces of butter-soft carrots bob in Zaftigs’ matzo ball soup, but the bowl suffers from under-salted broth and under-seasoned matzo balls, too. This simple soup verges on bland and tastes as though it were made with light vegetable broth instead of real chicken. Chopped liver is a stronger showing, with an ideal salt content, a little sweet ness, and a consistency that is slightly coarse and not too dense. The appetizer portion, served with red pepper slices, black olives, and a too-hard-boiled egg, could easily appease four.

The most attractive plate of liver — no easy feat — goes to Rubin’s. Here a dome of liver comes with four round crackers and a festive array of red and yellow bell peppers, tomato, and red onion. The thoughtful and cheery plating is enough to delight even the most old-fashioned diners, who expect their chopped liver apportioned with a hunk of bread.

Strictly speaking, there is no Reuben at Rubin’s, as this is a certified kosher restaurant, and pairing cheese and beef would violate the dietary laws that demand the separation of milk and meat. Rubin’s does have several equally appealing corned-beef sandwiches, and here the meat is sliced thicker than at any of the other delis. If you ask for a Reuben you will still be served one, with non-dairy cheese standing in for Swiss. Matzo ball soup is again under-salted and not particularly flavorful.

Barry’s Village Deli wins the prize for atmosphere. It’s the kind of place that could play a neighborhood deli in a movie. The dining area is small and hung with air-brushed portraits of celebrities like Sean Connery and Larry Bird. Meals are served on plastic plates or in disposable containers and hot drinks are sometimes brought to the table in Styrofoam. At some restaurants this could be off-putting. Here it adds character.

The liver is the best of the three dishes we sampled at Barry’s, and it comes with plenty of packaged Saltines. The Reuben is juicy and crusty, though not quite as buoyant as Zaftigs’. Again, the soup is bland. A posted list of ingredients reveals the use of commercial “chicken base.’’ Doesn’t anyone lovingly simmer broth from a chicken like mom used to?

The best soup is served at Maxie’s in Stoughton. Here, finally, broth and matzo balls are flavorful. This soup also has the tenderest chicken of those we sampled. The Reuben is comparable to Barry’s and is also available atop two made-in-house knishes in lieu of bread. Unless you want discomfort food, it should be split by at least two diners. The liver is rich and again more sweet than salty, though its presentation is the polar opposite of Rubin’s: An unapologetic, crudely shaped hunk, it looks as though it might have dropped from the sky. Still, for an unassuming deli in a suburban strip-mall, Maxie’s delivers an authentic experience.

If any of these eateries were to take a cue from the new Mile End Delicatessen in Brooklyn, N.Y., and embrace the wave of rootsy, back-to-basics, ingredient-focused cooking that now defines so many restaurants, diners would surely take notice. As “Save the Deli’’ author David Sax said in a recent conversation, delis offering more in-house specialties might remind patrons that these were the places that smoked and cured meats and made their own pickles long before your neighborhood gastropub.