Jacky’s Table is cozy and affordable 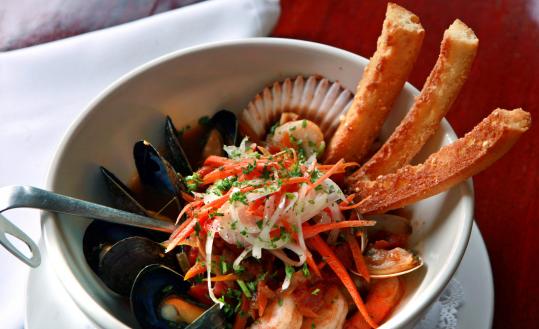 Enter Jacky’s Table and you are greeted by a brigade of Gallic charmers, intent on persuading you to break out any rusty bons mots at your disposal. Should you choose to speak in the mother tongue, they will be thrilled. But this isn’t really a language lesson. It’s a way of establishing the restaurant as a decidedly French space. Jacky’s Table, opened in June, is an embassy for food.

The restaurant is an offshoot of the ever-growing Petit Robert Bistro empire, which includes branches in Kenmore Square, the South End, and Needham, with another about to open in Downtown Crossing. Quick! One must hustle to write about one restaurant before co-owners Jacky Robert and Loic Le Garrec debut the next. Word is they’re already eyeing Cambridge for a second Jacky’s Table.

What sets Jacky’s Table apart from Petit Robert? Degrees. Petit Robert is fairly affordable and fairly casual. Jacky’s Table is even more so of both; the website calls it Petit Robert’s little brother. This suits its location, in Brighton, lodged squarely between the Boston University and Boston College campuses. A back-to-school menu for students is $19 for three courses of onion soup, chicken Cordon Bleu, chocolate mousse, and the like — the stuff of old-school romance. For anyone looking to sweep a classmate off his or her feet, this one’s for you.

The restaurant is in the former Zocalo space, a vast dining room and a cozy bar area featuring foosball and works by local artists, the two connected by an awkward space containing a few booths. Decor is simple — terra cotta-tiled floor befitting a Mexican restaurant, yellow and brick walls, red banquettes, subtle but patriotic red, white, and blue lighting along one side of the restaurant.

The fare is proto-French, a feast of pates, steak frites, coq au vin, and other stalwarts. It’s rich, often garlicky, not infrequently topped in bubbling cheese, and completely satisfying with slugs of red wine or French beer. Servers make a big deal of food being served family style — “like in a French home.’’ Many, if not all, of the dishes are meant to be shared.

A plate of rich pates features pork rillettes, chicken liver pate, and a pate de campagne made with pork butt, pork fat, and chicken liver. They’re served with pungent mustard and cornichons, but no toasts on which to spread them. We use the slices of baguette from our bread basket, which are excellent, warm, and just crisp enough without cutting the insides of your mouth. Jacky’s Table gets them from Montreal’s Au Pain Dore; whole baguettes are also available to take home for $2.50.

Salads are classic, leaves nicely dressed with well-made vinaigrettes. One evening a “chevre chaud’’ special features greens tossed with balsamic and honey dressing, topped with warm, creamy baked goat cheese. There is nothing complicated here, and there doesn’t need to be. The flavors are direct and complementary.

Onion soup is the way onion soup is meant to be. A bowl of deeply flavored broth — beef stock and long-cooked onions, caramel and char — topped with bread, the whole thing sealed together with a thick layer of gooey broiled gruyere and (quel shock!) good old American Muenster. It’s something Robert learned from chef Lydia Shire, he says later by phone. “She ate onion soup in some joint, and she said it was the most beautiful onion soup she ever had.’’ She asked the chef’s secret, and the truth came out: Muenster. “It’s bizarre, but it makes a nice glaze.’’

An entree of shellfish soup is another perfect bowl, chock-full of tender shrimp, scallops in their shells, tiny clams, and mussels, plus dollops of the traditional, mayonnaise-like red rouille. The broth is surprisingly spicy, without warning from the menu.

Many of the best dishes at Jacky’s Table are those that taste like really good home cooking — the kind of home where maman tipsily tips a bottle of wine into each pot as it simmers. Vol-au-vent features delicate puff pastry paired with veal, chicken, and mushrooms enveloped in rich, creamy sauce — it’s essentially blanquette de veau with a few interlopers. Boeuf bourguignon is made with beef cheeks, stewed with wine until they’re meltingly tender; coq au vin gives chicken thighs the same treatment. And then there’s chicken Cordon Bleu, breast meat wrapped around gruyere and ham, breaded with panko, seared, and finished in the oven. It’s served in pretty slices, with a pitcher of Bordelaise for liberal pouring. Where once such dishes seemed tres chic, now they have a fusty retro charm. Nostalgia and wine sauce go well together.

The homage-to-the-classics approach doesn’t always work. It’s true that what one wants from escargots is mainly lots of butter and garlic and a meaty chew; nonetheless, the snails at Jacky’s Table aren’t as flavorful as some. Same with a dish of duck confit potee. The braised cabbage and grilled sausage in this stew are excellent, but the scant pieces of confit are dry and tasteless. Lamb stew billed as spicy is bland, and there’s barely any sauce to moisten the meat.

Sides range from a decadent layered potato gratin dauphinois and crisp-tender fried mushrooms to dull ratatouille and pallid potatoes au gratin. These are all texture, light and fluffy with crunchy crumbs on top. Now only if they tasted like potatoes.

Desserts, too, are half there. Profiteroles are slightly overbaked, but as they sop up melting heaps of vanilla ice cream and chocolate sauce, it scarcely matters. Chocolate mousse is pleasingly light, and the “giant ile flottante’’ is giant indeed — a meringue sphere the size of a baby’s head in a bath of mild creme anglaise. But riz au lait brulee is barely crisp, and the pears in poire Belle-Helene have gone fizzy with age. (Still, poire Belle-Helene! When was the last time you saw that on a menu?)

The beer list is well compiled, with its most interesting component about 10 selections from France. If you wanted to spend a lot on a bottle of wine at Jacky’s Table, you couldn’t. They top out at $55. In the interest of this pricing scheme, perhaps, the list is only partially in French. It speaks New World as well.

It’s the exception — so much of the menu is in French, in fact, that several students eating here one night are a bit intimidated. “I don’t know what anything is!’’ one says. Robert and Le Garrec must be conscious of this, because the restaurant was originally named Chez Jacky; they changed it to Jacky’s Table last month. Why chance alienating anyone? The restaurant is so big, you are virtually assured of getting a seat. The problem may lie in filling the place. It’s a bit off the beaten path, and parking is a challenge. On several nights, too many of Jacky’s tables are free.

If the restaurant can establish itself, it could be the big-date spot for generations of students, the kind of place one remembers fondly decades later. It’s warm and welcoming and down-to-earth, and very reasonably priced: proto-bistro. One evening finds 20-somethings and 60-somethings, neighborhood residents and native French speakers, eating side by side. At one end of the bar, a couple inhales each other. At the other, a solo woman is entertained by a handsome bartender pouring generous glasses of pinot noir.

Her tardy friend arrives, full of apologies, but the woman seems just fine. “It’s just like France here,’’ she says happily, “except people actually want to speak French with you!’’

They leave several hours later, amid a chorus of au revoirs from the staff. “Come back soon,’’ the bartender says — one last French-accented message before they return to American territory. “Bring your friends, drink the wine, you can dance if you want.’’