At the Gallows, dishes are decadent 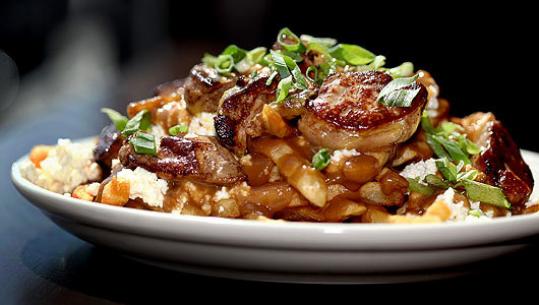 The place is called the Gallows. It’s located in a part of the South End where public hangings once occurred. The walls are adorned with taxidermy ravens. There’s a cocktail named after Elisabeth Aplegate, a Puritan punished for swearing. She was made to stand with her tongue in a cleft stick.

Don’t be afraid of the dark. The Gallows wears its Halloween costume year-round. Underneath its macabre surface, it’s bright as a new penny.

Owner Rebecca Roth greets you at the door with zany banter. She remembers your name the second time you come in, and what you ate and drank. And you may remember her, from the Biltmore in Newton, which she opened with chef Seth Morrison. He went on to cook at Vee Vee in Jamaica Plain; they’re back as a team here.

Morrison serves up decadent bar food such as Buffalo chicken livers, several iterations of the Quebec fries-and-curds dish poutine, Scotch eggs, and cornucopian cheese and charcuterie platters. It’s all a sneaky way of getting you to eat your vegetables. If pork is served in approximately 10 different dishes one night — from a belly BLT appetizer to country ham to Berkshire shoulder — well, so are heirloom tomatoes, tender lettuces, and sweet corn.

Juicy roast chicken (available in quarters, halves, or whole birds) with lemon herb jus and bread salad comes topped with a tumbleweed of greens. There are six different salads on the menu. That pork shoulder is served with succotash, sweet potato fries, and bourbon-pickled peaches. As in his previous perch at Vee Vee, Morrison worships at the altar of local produce. All of this summer finery keeps the menu from feeling heavy.

And Morrison keeps the prices reasonable, with most entrees in the low to mid-$20s. It pokes another hole in the trope that one must pay more for local ingredients, while maintaining the frequent tagline to that thought: But it’s worth it. Anyone who’s checked the fine print on a carton of eggs of late might agree. Until recently, area restaurants showcasing local farms and producers were almost all upscale. This is the year that local became more widely affordable. (See: Bergamot, Canteen, the Flatbread Company, Parsons Table, Rafiki Bistro, Sam’s . . .)

This isn’t the only way the Gallows points toward restaurants’ future. On the surface, it’s casual, kitted out with recycled wood planks and jury-rigged wire chandeliers that throw starburst patterns of light across the ceiling. The effect is part steampunk farm, part construction site. Waiters wear street clothes rather than uniforms, and there’s no stilted formality when they address customers. But the Gallows is predicated on service. Servers refold napkins when you get up from the table, pour your water before you realize you want it, and notice when, say, the steak in your salad is undercooked, taking the dish off the bill without a word from anyone at the table. It’s today’s version of old-fashioned hospitality. It’s tomorrow’s, too. For those who lament the faded bloom of formal dining, it’s useful to realize it may be just the trappings that have changed.

In this atmosphere, comfortable as if the Gallows had been here forever rather than just since June, it’s easy to forgive a few stumbles.

Many dishes deliver on their promise. Those Buffalo chicken livers will convince you this is the way chicken livers are meant to be served — fried, doused mouthwateringly in Frank’s hot sauce, their richness offset by a few sprightly celery leaves. A farmer platter offers blue cheese and fresh mozzarella with alluring accompaniments such as crunchy curried peaches, pickled eggplant, and Allandale honey. (There is also a ploughman platter, emphasizing charcuterie, and a fish-focused longshoreman platter.) The aforementioned roast chicken is likely to become a neighborhood staple. Entree specials are creative, and often special indeed — one featuring several succulent cuts from a roast pig with baked beans, coleslaw, and chow-chow, for instance.

There is an eminently edible burger, a thin patty on a buttered griddled roll, with American cheese, grilled onion, iceberg lettuce, and homemade pickles. This style, increasingly taking hold of Boston’s imagination, is harder to pull off than the juicy, thick behemoths restaurants often serve. The thin patties can lack flavor, become dried out. The Gallows’ burger does neither, though it does share its tiny plate with a scant few fries. “Corn doggs’’ (a salute to Snoop Dogg) encased in sweet, squishy batter and Scotch eggs with bright yellow yolks are pleasantly grease-slicked bites that accessorize well with the Gallows’ excellent cocktails. The smoky-sweet Skin & Bones — tequila, mezcal, lime, agave, and watermelon — may be my favorite drink of the year. And the Elisabeth Aplegate — gin, absinthe, cucumber puree, hyssop syrup, and lemon juice — is as fresh as its namesake. There’s also a short but sweet wine list with glasses mainly in the $6-$8 range and bottles seldom far over $50. The beer selection encompasses Dogfish and Delirium, though it loses me at Natty Light.

Other bar snacks are less compelling. A crab ball resembles rangoon innards, a dense blend of not-too-crabby cream cheese to spread on toasts. Tomato cocktail is a tiny dish of gazpacho-like substance. Is it soup? A snack? A sauce? It’s tasty, but its purpose is mysterious. The ploughman platter features good pickles and raisin-studded, sweet-sour caponata, but its pate lacks taste.

The flavors on a promising special of striped bass with curried peaches, basil, and polenta don’t quite come together, and the fish is overcooked. As much as I appreciate a comprehensive selection of salads, the steak salad and iceberg wedge border on dull. They’re too heavy on the greens, in need of more of the components that ought to make them sing — feta, olives, and mint in the former, and bacon and blue cheese ranch in the latter.

As for the poutine, it is mostly excellent. The fries are crisp, deep brown, and very salty. They’re drizzled with savory chicken gravy, and they come in several variations: traditional, topped with foie gras, or “out of control.’’ Depending on the night, this can mean topped with anything from pork and beans to fried bologna, fried salami, and onions. There’s even a vegetarian version, with mushroom gravy. But the key component to poutine is the cheese curds. They should be firm, springy, so fresh they squeak against your teeth when you chew. Morrison crafts his own curds, which taste lovely but have a texture closer to ricotta. For traditionalists, these curds won’t cut it.

Dessert is simple and pleasing, with homemade selections such as blueberry cobbler and a layered dish called the Fluffernutter Foster brulee: peanut butter mousse, banana, and chocolate, topped with Marshmallow Fluff. It’s a more lavish cousin to the s’more, and you’ll definitely want some more. You can also ask for a complimentary cone of soft serve. If it tastes a bit richer than usual, that’s because it’s made with sweet cream.

The Gallows offers the South End an ideal watering hole. The only thing you’ll want to hang here is your hat.