A feast for the eyes, but not the palate

Sam’s food no match for its views 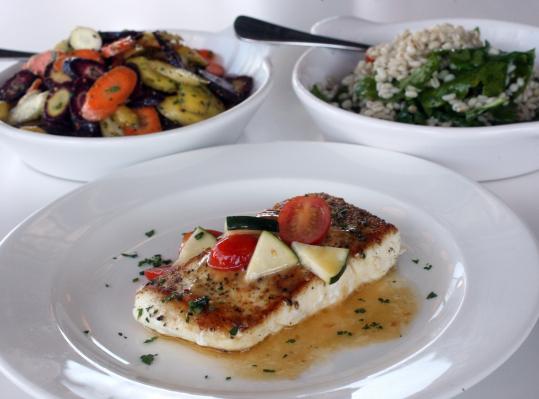 Halibut is served with plenty of salt in a lot of good browned butter, alongside tomatoes, eggplant, and squash. (Suzanne Kreiter/Globe Staff)
By Devra First Globe Staff / August 4, 2010

It’s the most beautiful night. The harbor is peaceful. Heat lightning flashes in the sky. The serenity is broken occasionally by passing party boats blaring bad Dave Matthews covers. And then they’re gone. The wind kicks up, and Esti Parsons (Radius, Rialto) glides from table to table, offering shawls to the chilly. The hospitality goddess walks the earth.

The deck at Sam’s, inside fashion emporium Louis on Fan Pier, may be the most romantic, idyllic, vacation-like spot to eat in the city. It is, therefore, nearly tragic that the restaurant is so far from ready for prime time.

So many things about this place are promising. It’s helmed by Parsons, an industry veteran known for her front-of-house finesse. She’s teamed with husband Drew Parsons (also a member of the band American Hi-Fi). His brother, Jon Parsons, relocated from Brooklyn, N.Y., to run the beverage program. The kitchen is manned by brothers, too: chef Ken Rogers (Via Matta, 88 Wharf) and sous chef Andy Rogers. Their brother Jon Rogers tends bar. It’s a friends-and-family affair.

The new Louis is as modern as the former building was traditional. It’s a modular construction of wood, glass, and what appears to be a rust-colored shipping crate with “LOUiS’’ painted on the side. Sam’s, named for Louis owner Debi Greenberg’s daughter Samantha, merges that aesthetic with the spirit of a ’50s diner. You come in through a hall lined with chalkboards, entering a room of white Formica tables and black chairs, cement floors and large, spherical white pendant lights, and windows, windows everywhere. It looks good, but it sounds terrible. The hard surfaces throw noise around like a ninja star. Watch out. It will cut sharply into your conversation. Outside is the place to be, but it’s first come, first served. Sam’s only takes reservations for inside tables.

The menu is a compilation of dishes as fuss-free as the restaurant’s name — salads and roast chicken and grilled salmon and a burger. It’s a surprise to find such basic food at stylish Louis. But when they’re well executed, simple dishes are a pleasure. This is what we hope for when we order poached seafood with herb aioli. Available in platters sized for two, four, or six people, it seems the perfect thing to share while taking in the view.

Our platter for two comes with very good cockles, some oddly shaped chunks of overcooked white fish and salmon, barely open mussels, and a few bits of lobster. It’s not particularly delicious or attractive. With seafood platters, presentation really matters.

Less so simple snacks, which is the direction we head next. Our waiter highly recommends grilled piquillo peppers stuffed with melted manchego. The red peppers are sweet and tender, pairing well with the under-melted cheese. It’s a fine little appetizer, but it hardly seems worth his glowing praise. Perhaps he simply hopes to steer us away from the spicy lemon chicken wings. They’re flabby, not crisp at all, not lemony, and not spicy. Have you ever seen chicken wings go uneaten? Me neither, until now.

The now ubiquitous Scotch egg makes an appearance, a hard-boiled egg encased in a thin layer of sausage. The yolk is chalky and dry. Much better is the poached egg, nice and runny, that’s served atop a giant pile of greens with a bit of crisp bacon. The dressing is overwhelmingly lemony, so tart it stings your mouth. Nonetheless, salads are a relative strength at Sam’s. Earthy wedges of red beets are topped with mild house-made ricotta. The cheese is a bit grainy, but the flavors pair well. Nicoise salad, an entree, looks appealing with its bright colors. It’s underdressed, and this time there’s not enough acid in the vinaigrette. Unfortunately, the eggs and the fish are overcooked.

Perhaps Sam’s is concerned about endangering guests’ health with undercooked food. This might explain why the burger features two “diner-style patties,’’ as they call them, rather than a single thick, juicy one. Cooked completely through, they are one step removed from McDonald’s. Grimace. But great fries and toppings help redeem the sandwich. These include mushrooms, bacon, a fried egg, blue cheese, and cheddar; two are included along with lettuce, tomato, and onion, but you can keep adding on for another $1 per item. A ripe tomato slice would go a long way. Sam’s features produce from Sudbury’s Siena Farms, so perhaps that can be arranged.

Confit country ribs support this fear-of-food-poisoning theory. From confit, we expect rich, succulent meat. These ribs are pale, tasteless, and dry. Overcooking continues with an entree of crepes. Blackened on the outside, it’s clear just from looking at them that they’re burned. They seem to contain spinach and pine nuts, but all one can taste is the charring. (When we ask our server about the dish before ordering, he says, “Have you ever had crepes? They’re French pancakes.’’ Surely the average diner is more sophisticated than this.)

A skate entree functions as an inadvertent sight gag — it’s such a small piece, you have to laugh. “It’s a skate wing tip,’’ one guest chortles. “If I’d wanted to go to Clio, I would’ve gone to Clio,’’ quips the person who ordered it, referring to that restaurant’s relatively scaled-down portions.

After these dishes, halibut Provencal is a pleasure. It’s well seared but still juicy, served with plenty of salt in a lot of good browned butter, alongside tomatoes, eggplant, and squash. Entrees also come with two sides, served family style. One night these might be fennel roasted with onions and Israeli couscous, another roasted Siena Farms carrots and smashed potatoes with olive oil. It’s a nice way to round out everyone’s meal.

Dessert, too, feels homey and satisfying. A fruit fool, strawberries layered with whipped cream, is light, summery, and sweet. A good, homemade-tasting brownie is topped with a small scoop of vanilla ice cream and hot fudge. Coffee one night is burned, but you’re not likely to linger for it anyway: Parking is free if you stay for less than two hours, but after that it costs $12. It’s an incentive to rush through the meal.

Sam’s wine list is oriented to value, with the likes of Burgans Albarino and El Coto Rioja by the glass for $9. A bottle of Ramsay pinot noir ($42) is pleasant drinking. The beer list could be more diverse — it’s a series of light, watery brews plus Guinness. House cocktails skew toward fruity and sweet.

Service is up and down. Waiters are friendly but sometimes forgetful. The glass of dessert wine we order one night never arrives. At the bar, it takes eons to get someone’s attention, then a few more eons to get your drink. Food can be a long time coming, too. One evening the women at a table next to us wait so long, Esti Parsons comes over to apologize. “We’re kind of starving,’’ they tell her nicely, with apologetic smiles. The people running the show at Sam’s are so kind, the location so alluring, you root for the place even as it lets you down.

And so I have hopes Parsons and crew will turn it around. They owe it to the beautiful setting, which makes you realize how underutilized the waterfront really is. (When will someone open a cozy, romantic, food-focused fine-dining restaurant here? It would become an instant marriage-proposal magnet.) With this view, Sam’s doesn’t need to do anything fancy. It just needs to do it well.

Noise level Inside, you have to shout to be heard. Outside, you can hear the crickets chirp.