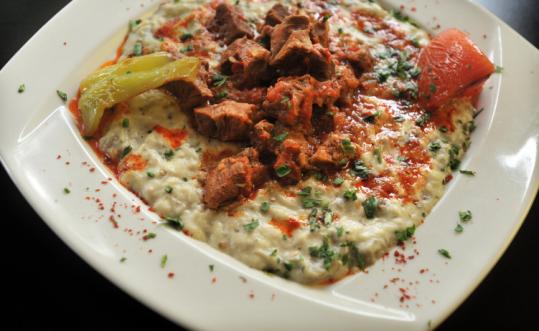 Huseyin Akgun is the disappearing restaurateur, who reappears often with a new restaurant, new location, and new dishes. He’s reemerged at Istanbul’lu in Somerville. The Turkish-born cook has disagreed with landlords, nursed an ill mother back home, and in May opened this 10-table spot, where the food is outstanding. Every single plate is beautiful and delicious.

Akgun has been cooking around here for over 20 years, at Istanbul Cafe on Beacon Hill, Anadolu near Mass. General, another Istanbul Cafe in Brighton, and most recently Rizelli Cafe in Brookline Village, all closed now. Istanbul’lu is the word used for people who come from the Turkish city. The chef is actually from Rize, in the northeast, on the Black Sea (residents are called Rizelli), though he was raised in Istanbul.

Piyaz salat is a white bean salad ($8) with remarkable flavor. He soaks canned beans in lemon juice and water to intensify the taste, then mixes them with more lemon, red onions for extra bite, parsley, and sumac, the ground red spice that makes everything better.

Eggplant comes many ways, sometimes with Akgun’s trademark bright red, light tomato sauce. It appears on izgara patlican ($6), grilled eggplant, baked with fresh white cheese and cubinal peppers. In patlican salad ($4), the vegetable is roasted and lemony, pureed with tahini, olive oil, and roasted red pepper. Most striking is sultan’s delight ($13.50, pictured), a dish of roasted, pureed eggplant mixed with a little cheddar, used as a base for morsels of tender, sauteed lamb.

The menu offers panini, which seems odd until the chef explains that, in Turkish, the word sounds like toast, and he thought customers would think it’s for breakfast. In fact, he’s making eggs in baking dishes, but the sandwich, too, could be breakfast, particularly pastirmali panini ($7.50), slices of pastrami sandwiched with tomatoes and melty cheese. Panini are cooked on homemade flatbread, another of his signature dishes. Before you order, it comes to the table fresh from the oven with a dish of garlicky red pepper puree. The oval-shaped bread has a slightly sweet, tender crumb.

End with Akgun’s winners from the sweet kitchen: baklava and rice pudding ($4.50), the milkiest, lightest, most aromatic version this side of the Bosphorus.