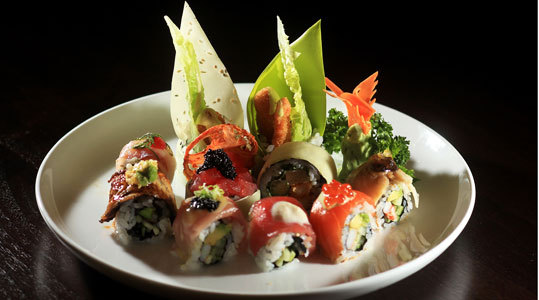 We’re trying to order a dish called “Japanese Premium Plum Chazuke.’’ It’s on the menu, but the waitress really doesn’t want to let us have it. Tall and blond, in a sleek room decorated in stark white and spring green, she looks like a model from a modern planet. Japanese soul food is not in her vernacular — particularly not chazuke, the homiest of dishes. But when made right, this soupy rice in broth with plum and tiny round crackers has tremendous powers. It can soothe and revive the eater simultaneously.

She frowns, earnest. “I don’t think you will like it,’’ she says. “Someone ordered it and said it was really not good.’’ Get the scallop kiwi roll, she entreats. Try the crispy shrimp; it’s really popular. She is only trying to steer us clear of the shoals of gustatory unhappiness, which are desolate shoals indeed.

Basho Japanese Brasserie — a welcome addition to the Fenway — specializes in a contemporary take on the kind of food served at izakaya, or Japanese gastropubs. The stylish restaurant even goes to the trouble of offering robatayaki — skewers of meat, fish, and vegetables grilled over charcoal, relatively rare in this country. Even so, it is likely that many who come here will ignore the bulk of the menu, because in the US, Japanese food by and large still means sushi. Clearly, it does even for some of the people who work here.

Basho, opened in April (the name means “place’’), is owned by Jack Huang, who also operates Douzo in Back Bay. The kinship is clear. Both feature clean-lined decor, with sushi bar as central focal point. Basho is immense — large glass doors lead to 7,500 square feet of dark, angular furniture, white-on-white geometric patterns, and a sort of light show/screen saver of floating chopstick shapes projected over the sushi bar.

Both restaurants also feature rosters of designer rolls named for creatures that bite, sting, or crawl: alligator, scorpion, spider, tiger. This is a deadly menagerie.

We wrest the chazuke out of the waitress, and as promised, it is terrible. The crackers are stale, there’s no plum flavor, and the rice is too hard. But the ever-popular rolls are quite good.

There’s a house-named Basho roll, fried crab, lettuce, shiitake, asparagus, pickles, and jalapeno aioli, rolled in a sheath of cucumber and soy paper rather than seaweed. There’s a yuzu yellowtail roll, wherein a sauce made from the distinctive Japanese citrus yuzu complements seared fish, roe, avocado, cucumber, and spicy mayonnaise. There’s a crunchy roll, made so by the inclusion of fried onion and sharp, tiny crumbs; playing against their texture are cucumber, tuna, salmon, several kinds of roe, and a mango sauce offputting in its sweetness.

They’re a party in your mouth. These rolls always are. Also, they always taste virtually the same. This isn’t Basho’s fault. It’s a fact of the genre. There may be an onion flavor here, a fruit flavor there, a crunchier crunch on that one, a spicier spice on the other. But once you’ve eaten one giant round of rice and seaweed and crispy bits and flavored mayonnaise and 12 kinds of fish and four kinds of roe, you know what to expect from them all. Basho does the genre proud, and people will come and drink saketinis and Tokyo Cosmos and order from the deadly menagerie until those creatures go extinct. (Woe to the phoenix and the dragon!)

Nothing wrong with that.

What Basho does really well, though, is more refined and comparatively restrained. The menu calls it “flavored’’ sushi and sashimi, which makes the food sound like Jolly Ranchers. But Youji Iwakura, formerly of Uni Sashimi Bar, is chef here, along with executive sushi chef Hai-San and kitchen chef Jun Zhong. The flavors are far from kiddie candy. And they pair better with Basho’s sophisticated sake list than with its fruity cocktails.

To wit: Kanpachi carpaccio, thin and delicate slices of amberjack sashimi, with a dressing made from the herb shiso and yuzu kosho, a paste of yuzu rind, chilies, and salt. Its herbaceous, bracing flavor plays against the sweetness of chardonnay gelee, the dish’s other component. Oyster shooters are pretty little green shots topped with chardonnay foam and caviar; the liquid is a refreshing blend of cucumber, citrus, and soy, and at the bottom awaits a plump oyster. “Foie gras new style sushi’’ is an idea that’s no longer so new (nor is the oyster shooter, for that matter), but that doesn’t negate the excellent pairing of flavors: rich foie gras on rice with apple, sweet potato-coconut puree, and a winy, thick soy reduction.

There are nearly 20 variations on flavored sashimi and sushi, and one wants to try them all: Hamachi pastrami with jalapeno aioli and passion tamari! Cured saba with crunchy mushroom and apple mustard soy! Seared toro with barbecue sauce, fresh wasabi, and truffle oil! It’s a strength and weakness of this menu. There is so much here to sample. There is too much here to sample. With all of these con structions, plus a roster of standard sushi shop offerings such as spicy tuna rolls and salmon nigiri (both farmed and wild are available), one could call it a day.

But Basho still has a long list of cold appetizers, hot appetizers, soups, salads, side orders, tempura, and entrees. Standouts include the steamed bun sandwich — a puffy, white Chinatown bun wrapped around crisp-edged Kurobuta pork and pickles — and Kobe beef stew. This is winter food worth ordering in summer, rich chunks of tender meat and vegetables simmered in a heady sukiyaki broth, flavored with soy, sake, and wine.

Beefy is as beefy does, and the tofu hamburg steak doesn’t. There’s no red meat in this patty, made of bean curd, fish paste, eggs, vegetables, and pine nuts. It approaches the heft and chew of hamburger, and it’s served with teriyaki butter sauce, rice, and grilled vegetables. It reads like many Japanese interpretations of Western dishes, strange and strangely enjoyable, if not at all what your mouth is expecting.

Not all of Basho’s dishes achieve this. An onsen egg salad inspires a lukewarm reaction — it’s just greens with a little dressing topped with a plain poached egg. For dessert, banana tempura does to the banana split what Asian chicken salad does to the deli version. The fruit is battered and fried, served with vanilla ice cream, Mandarin oranges, ginger syrup, chocolate sauce, and candied walnuts.

All this and we haven’t even gotten to the thing that’s meant to set Basho apart from other Japanese restaurants in town: robatayaki. Traditional robata restaurants are rustic, with seats arrayed around a central grill. There chefs cook up meat, fish, and vegetables, then serve them to guests on wooden paddles. Patrons drink, eat, and repeat. Chefs and waiters holler back and forth, and customers holler among themselves. It’s a rowdy group experience, where you can see the ingredients and watch the food being cooked.

At Basho, it’s a lonelier enterprise. The grill is enclosed in glass in a corner. The chef within looks forlorn, as though he’s been sent to the time-out room. You can’t smell what he’s cooking, can’t interact with him. It’s robata robbed of its essence. The skewers that come forth are often tasty: ground chicken, fatty pork belly with a zing of mustard, meaty shiitake mushrooms. Chicken breast, however, would please only the kind of eater who wants no seasoning, nothing “weird’’ to pass his or her lips. The skewers could be hotter when they arrive, and, to my taste, slightly more charred. And they are skimpy, offering a few tiny bites per serving. There is nothing thrilling enough, in terms of taste or performance, to make Basho’s signature robata a star of the show.

The restaurant gives the audience what it wants. Sushi and sashimi, ever and always, take top billing. Here, they deserve it.