Guilty pleasures (and tikis too) at Kowloon 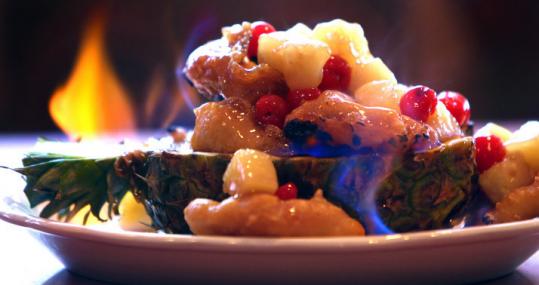 Blue flame lights up this side of the lagoon. Tonight it’s leaping from my half pineapple, which contains a fragrant soup of batter-fried chicken, celery, onion, and pineapple chunks. The dish, flaming ambrosia ($14.95; pictured), is so startlingly sweet that the maraschino cherries provide tartness. But somehow I can’t stop eating it.

The genre of tiki bar and restaurant is a quintessentially American treasure. Kowloon in Saugus is a great example. These establishments, fantastic conflations of all things exotic and Eastern, were popularized by the South Pacific tales of Greatest Generation soldiers, and fueled by Hawaiian statehood in 1959. During this time, Boston native William Wong visited Oahu and began converting the Saugus family restaurant to its present Polynesian form. It’s been a destination ever since. Wong’s sons Bob and Stan run it now.

The sprawling faux-Tahitian complex seats 1,200 under a soaring, landmark A-frame that looks like an attractive climb for King Kong. It’s bustling at the bar, at the Kowloon Komedy club, and above all, at dinner.

An acquaintance of mine drives 40 miles for the Special Saugus wings ($8.75), and I can’t blame him. They’re spicy, garlicky, salty, tropically fruity, and perfect with a coconut monkey mist cocktail ($7.50).

Kowloon offers more than 400 items, grouped as Polynesian, Cantonese, Szechuan, Thai, sushi. That many dishes on a menu often doesn’t bode well, but nothing at Kowloon follows usual rules. While not all dishes work, more than enough do. Sushi is very good, as are many of the authentic and well-prepared Thai specialties. Much of the Chinese food is classic 1960s Chinese-American — but tasty.

Under the watchful eyes of giant stone tikis, you get a history lesson in Asian-American cuisine. The Wongs say the chicken chow mein ($9.25) is the same as it was 60 years ago. Two plates arrive. One holds a hot, white jelled mixture of onions, sliced chicken, julienned celery, bean sprouts, and mushrooms, all cooked soft. The other is piled high with crunchy-fried, tubular noodles. You mix the two, the noodles soften, and the result is a guilty pleasure, MSG and all.

Whatever you get, order fewer entrees than people at the table. The servings here are too enormous for anyone to finish alone — except the professional wrestlers and players whose signed photos line the walls.

Kowloon’s cuisine is not haute, fusion, or light. It’s an escape from magazine photo aesthetics. The experience is good old-fashioned American fun — enjoyable for linebackers and mortals alike.