Where seafood and the sea meet 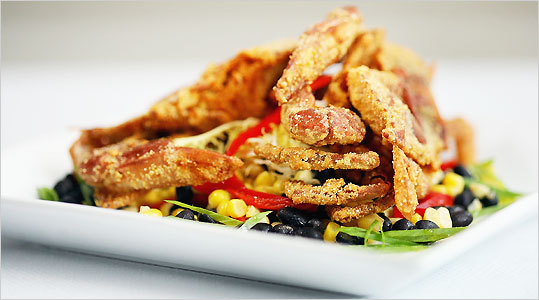 ‘Where should I go for the best seafood with a water view?’’

That’s the question that appears most frequently in my e-mail inbox. Not just any seafood — the best. And not just anywhere. On the water. The assumption is clear, and logical. Given Boston’s location and reputation, why wouldn’t we have multiple great seafood restaurants on the water?

When Rowes Wharf Sea Grille arrived on the scene last year to general acclaim, it seemed a possible end to this state of affairs. Located at the Boston Harbor Hotel, it offers an unbeatable eyeful of harbor and a menu from chef Daniel Bruce. With its lovely patio recently reopened for the season, it’s time to take another look.

Before it was the Sea Grille, this space was called the Intrigue Cafe. With Bruce’s dishes, it posthumously lives up to that billing. The restaurant offers cod-filled corn empanadas with lemon-caper tartar sauce; roasted Maine lobster with corn pudding; caramelized jumbo sea scallops with black quinoa and red kuri squash sauce. . . . This is far from seafood in the rough. The dishes promise polish. Sometimes they deliver. Too often, sides are boring and bland; fish is overcooked.

Anything raw here is wonderful — the seafood is high quality, and these presentations showcase that to the utmost. There is an ever-changing selection of oysters, from Island Creek to Malpeque to the lovely Kusshi, from British Columbia and not yet frequently spotted in these parts. Briny and sparklingly fresh, they are served with saffron mignonette and Meyer lemon cocktail sauce. The condiments are very good, but the saffron and Meyer lemon offer more in terms of menu atmospherics than taste. Still, evocative menu description serves its purpose. It’s gustatory foreplay.

Slices of hamachi are served raw on a long plate, touched with a drizzle of miso and lime, accented by a tiny pouf of salad. The crudo is cooling and refreshing; eating it induces serenity and satisfaction.

Then you’re ready for a party. The menu offers a short list of fun finger food for sharing. Empanadas are miniaturized, the golden corncakes filled with cod, a New England twist. The dough is just right, a little crispy, a little soft. The salty empanadas pair well with lemon tartar sauce for dipping.

Long spring rolls are generously filled with lobster. Frying sometimes overwhelms the sweet taste of the crustacean, but not here. An accompanying ponzu mirin sauce has an artificial flavor to it, as if it’s made with bottled citrus juice, but that doesn’t squelch the pleasure of eating this dim sum riff.

It stands to reason that a majority of Sea Grille guests will order the traditional New England clam chowder. (This outfit is mercifully too classy to call it “chowdah.’’) If they aren’t familiar with the dish, this version might give them the wrong idea. The night we try it, it’s curdled. It has a nice flavor, and if this alchemy took place in a pot in your own kitchen, you might shrug and serve it anyway. But a bowl that looks like this shouldn’t exit a restaurant kitchen. Insult to injury: The clams are intensely chewy.

An appetizer of mussels in a pilsner-based broth doesn’t increase one’s confidence. They are freakishly large, dried out and mealy rather than plump and juicy. We each eat exactly one; no one wants seconds. One diner describes them as “ghoulish.’’

So thank goodness for another starter, soft-shell crabs, which are dredged in cornmeal and fried, juicy and meaty and delicious. They’re served with a mix of corn, black beans, red peppers, and scallions that might be better left till corn is in season, sweet and tender. This composition is called a “salsa,’’ but it’s more like a vegetable medley -- something you’d be served at a college cafeteria. Where is the olive oil, the lime juice, the spices, the salt?

At a seafood restaurant, a dish called “simply grilled daily catch’’ should be a slam dunk. One evening, Acadian redfish is the star of the show. It’s a nice piece of fish, but it lacks that great charred taste that is the raison d’etre of fish on the grill. It comes with steamed squash, zucchini, and carrots, as plain as paste. It should be called the dieter’s special.

Sea scallops cooked till they’re golden and caramelized are excellent, but they come with watery, bland quinoa; a red kuri squash sauce tastes nothing like squash. Lobster is paired with an eggy, sweet corn pudding. The roasted tail meat is tough, the succulent claw meat much better.

In dishes of halibut and swordfish, the fish is also overcooked. Halibut comes with a too-heavy, creamy risotto. Swordfish would be a nice dish with juicier fish: It’s served with jasmine rice and a fragrant curry coconut sauce.

Just as steakhouses often prepare excellent fish, this seafood restaurant does very well by meat. Last on the list of appetizers is shaved pork with Korean red pepper sauce. What’s that doing here? Thin-shaved meat is served with fried rice, dosed with hoisin and sriracha-esque hot sauce. It’s greasy and spicy and highly tasty — just what you’d want at 3 a.m. after a few beers, only served in a blue-lit room decorated with paintings and models of boats. Lamb chops, too, are very good — pink in the middle, and stacked dramatically.

Desserts are ornate constructions — for example, the raspberry panna cotta pyramid, which looks positively Masonic. It has clear fruit flavor but too much gelatin. A pairing of caramel custard and chocolate-espresso pot de creme is pudding for grown-ups, accompanied by a butterfly-shaped cookie perched on a puff of cream.

Bruce is a cofounder of the Boston Wine Festival, and at sister restaurant Meritage he focuses on pairing food and wine. It’s no surprise that Rowes Wharf Sea Grille’s selections serve seafood well, at a range of price points. Familiar with the list, waiters are ever ready to offer bottle or glass recommendations.

For if the dishes aren’t always polished, the service is. The staff is solicitous, enthusiastic, and just formal enough. They have the answer to just about any question you might pose, and if they don’t, they’ll find it with good humor — no matter how piddling or random it may be. (On one occasion, we encounter a condescending fellow who appears to be steering us toward the more expensive dishes and bottles, but he is the exception.)

Ultimately, though, Sea Grille’s best offering is that patio. There you can take in the water view in the breeze, sipping a cold glass of something spritzy and slurping down oysters. On a warm evening, people promenade to and from events, dressed in summer finery. The hotel’s summer series adds outdoor movies and live music to the picture.

Boston is still waiting for that perfect seafood restaurant with a water view. Rowes Wharf Sea Grille’s food is hit or miss, but the place still has its charms.