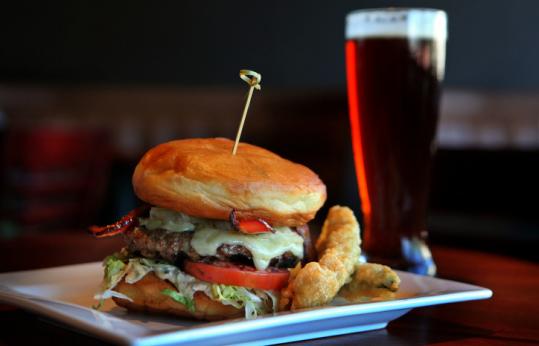 Wear loose clothes into Jerry Remy’s Sports Bar & Grill. This is a sports bar on steroids, from the 24 flat-screen TVs to the Remy Burger served on fried dough.

Jerry Remy needs no introduction (here’s a short one anyway: former player, longtime Red Sox broadcaster, beloved by fans). Red Sox Nation will doubtless love this new place, too, for it is a shrine to the team. Even when the Sox are out of town, it is packed; on a game night, forget it.

The restaurant, in the former studios of WBCN, seats 360, and it’s as if you can hear every single one of them. The back overlooks the right-field bleachers at Fenway and you can hear cheers during home games.

Everything is large. The 30-seat bar features 20 draft beers, including Jerry Remy’s Red Ale, slightly reminiscent of Bass. The menu is oversized and features big plates of typical bar food. Everything is homemade, “down to the salad dressing,’’ our friendly waiter tells us.

Start with the calamari ($11). It’s got a crispy cornmeal crust and comes with the usual chili dipping sauce and an unusual, and quite good, soy cilantro sauce. Someone in the kitchen is “throwing the heat,’’ for the calamari; it’s a bit over-chipotle’d. Though there’s a good amount of crabmeat in the crabcakes ($14, with cole slaw), they are not particularly flavorful.

The Remy Burger ($10, pictured) is a paean to the patty. It’s big, smoky, stacked with white cheddar, grilled onions, bacon, and “BoSauce,’’ sort of like Russian dressing, set in a fried dough bun. Your cholesterol will be crying. Super crunchy homemade chips come on the side. The RemDawg ($9) is a juicy, giant hot dog covered in chili and cheddar.

In the parking lot, a large smoker from Texas makes succulent brisket, ribs, and chicken. Thinly sliced, tender brisket ($17) comes with thick mashed potatoes, carrots, asparagus, and slaw. The dish should be warmer than room temperature.

Out of curiosity, we order a mac and cheese croquette ($5). Call it Death on a Plate: a cheesy square dipped in bread crumbs, deep fried, then wrapped in bacon. There’s so much heat here that it nearly numbs the tongue.

Desserts must be seen to be believed. The Fenway ($8), for one: chocolate peanut mousse, more peanuts, popcorn, and caramel, topped with a wedge of peanut brittle and a sprinkle of caramelized popcorn.

At this point, you will feel as if you’ve gone nine innings against the — and won.