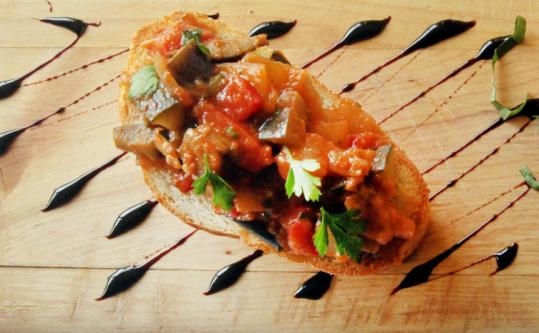 (Chitose Suzuki for The Boston Globe)
By Kathleen Burge Globe Staff / May 5, 2010

Francesco Martini came to Boston five years ago to work at Mare, the North End seafood restaurant, and eventually became executive chef. But when he left last year to create his own place, he wanted a small, family restaurant where people would feel comfortable bringing their kids. He opened Buona Vita in Arlington Center, which serves a mix of traditional and creative dishes, and one bargain-friendly offer: free pasta or pizza for kids.

Meals begin with a basket of bread — on one of our visits, this includes focaccia — and a small bowl of greenish olive oil with a few drops of balsamic vinegar. These days, the 40-seat spot is busy but a Friday night reservation keeps us from waiting for a table for five. Some of the best fare comes early in the meal. Bruschetta ($2.50 each) varies from day to day, and one night we try a sample of all four available, delivered on a long wooden board: a traditional tomato topping with olive oil and basil; a wonderful creamy ricotta; eggplant caponata (pictured); and a simple piece of toasted bread with sausage.

One of our favorite pastas is pappardelle ai fungi e salvia ($14.95), pasta with mushrooms and sage, a hearty dish made interesting by the musty herb. Penne pistacchio e gorgonzola ($14.95) manages to deliver the power of blue cheese without the sodden density of many gorgonzola sauces. Fettucine alfredo ($17.95) is also creamy and lacks the stultifying heaviness that often plagues this dish. The staff often mentions the octopus dishes as a specialty — either as an appetizer in polpo alla Luciana ($9.95), braised octopus, or an entree of linguine with grilled octopus and collina tomatoes ($17.95). The pasta version has plenty of baby octopi mixed with pasta in a peppery red sauce. Pizzas ($10.95 for a margherita) are solid, though not as memorable as the pasta.

Chef and owner Martini had a circuitous path to Arlington: He is a native of Naples and graduated from law school in Italy but decided he would rather cook than practice law. He eventually opened his own restaurant in Spain. In 2005, he was lured to Boston by Mare. At Buona Vita, he sometimes pops out of the kitchen and greets diners.

Although our waiters are charming and warm, when the restaurant is packed, service can be a little bumpy. On our first visit, the water that filled our glasses is room temperature. On our second visit, we have to ask three times to get more olive oil for the bread. But the place is still young. We hope it sticks around long enough for some of the children in the dining room to come back as adults and hang out with their friends.