A Mexican victory at El Pelon 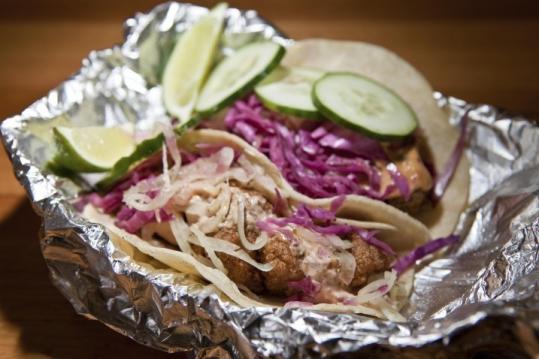 The El Pelon experience includes fish tacos with onions and cucumbers. (Aram Boghosian for The Boston Globe)
By Devra First Globe Staff / May 5, 2010

On May 5, 1862, Mexico defeated France at the Battle of Puebla. It was quite a victory. Mexico’s army was much smaller than France’s, which was then considered the greatest in the world.

On a slightly smaller scale in the realm of victories, we have the return of El Pelon. At the end of 2007, the beloved Fenway taqueria suffered a fire and closed temporarily. It reopened — only to be destroyed in a second fire a little more than a year later.

But you make your own luck. In March, El Pelon re-reopened in a new spot in Brighton across from Boston College. With apologies to the French, Cinco de Mayo is a fine day to celebrate victories large and small. And eat burritos. Battle reenactors, go do your thing. We’ll celebrate by paying a visit to El Pelon.

The new location is small, a 12-seater with stark white walls, decorated minimally with folk art, maracas, and framed photographs. The brightest thing in the place is a row of T-shirts in happy hues hanging on the wall over the counter, El Pelon’s logo — a bald guy with a bird on his shoulder — splashed across their pink and orange fronts.

But it’s the brightness of the flavors that brings people here. It’s one reason so many have loyally and sometimes obsessively frequented El Pelon since it opened in 1998. Tacos are adorned with pickled cabbage, limed onions, thin-sliced cucumbers, and fire-roasted salsa. Guacamole is a springy green. Lime and crema and chopped salsa fresca give grilled meats a lift. Everything is fresh. To drink, there is Mexican Coke (made with sugar instead of high-fructose corn syrup), Jamaica Plain-brewed Real City soda, and pink, green, and orange Jarritos sodas that match the T-shirts. There’s also horchata, the creamy beverage that’s like an amped-up Mexican version of rice milk.

The Brighton menu looks familiar. The antojitos (snacks), quesadillas, tortas, and other dishes of the Fenway location return untampered with. It’s a bit like turning on your TV to see Nomar, Manny, and Pedro in the lineup again: nostalgic and somehow right.

Perhaps El Pelon’s best-known dish is its pescado taco. These come two per order and feature chunks of cod crusted in spiced cornmeal and fried. They’re rolled into a tortilla with onions, cabbage, cucumbers, and chili-tinged mayonnaise. Fish taco aficionados expecting a lighter, more tempura-like batter may be disappointed by the cornmeal, which is a bit rougher and heavier in the mouth. The spice mix can war with the delicate flavor of the fish. But the frying is perfectly crisp and greaseless, and the sourness and crunch of the cabbage and onions complement the fat and heat of the mayo.

The more basic the taco, the better: It’s a rule that holds true across the taqueria board. A good taco wants nothing more than warm corn tortillas folded around deftly grilled or braised meat with a squeeze of lime and maybe a bit of onion, cilantro, or salsa. It’s particularly true at El Pelon, where the fillings come bundled in single-ply tortillas, rather than the doubled-up version one commonly finds, and for a reason. Those fillings are juicy. One tortilla falls apart.

This is what we experience when we order several of the “tacos de la casa.’’ In addition to fish tacos, these include versions with poblano chilies, steak, and chicken. Rajas con queso tacos include black beans, roasted poblanos, and jack cheese with salsa fresca. There are too many beans and too few strips of chilies. Caramelos tacos are a mixture of grilled steak, melted cheese, hot sauce, salsa fresca, and guacamole. They’re quite delicious, if drippy. Americanos tacos feature grilled chicken, cheese, lettuce, sour cream, and salsa fresca. All three versions disintegrate as we eat. El Pelon’s more basic tacos — grilled chicken, carnitas (braised pork), and carne asada (grilled steak) — have more integrity.

A pork tostada faces no such challenges. You come to it, not it to you. To be eaten with plastic utensils, it’s a crisp disc of fried tortilla, topped with refried beans, tender pieces of meat, barely spicy but refreshing salsa, lettuce, cheese, and crema. It’s a lovely array of textures and flavors. For those who like a little spice, ask for hot sauce. You’ll receive a tub of pale green goo that enlivens every dish. It’s good stuff.

Enchiladas aren’t the thing to order here; the salsa verde has an unpleasant taste, the tomatillos are not adequately tempered by other ingredients. Quesadillas, however, are simple little pleasures, flour tortillas folded neatly about cheese and optional meat or beans like clean hankies. A side of salsa is all the embroidery they need. I’m not usually a huge fan of tortas — the bread on these Mexican sandwiches seems an encumbrance when compared with the economy of sweet, fragrant tortillas. Here, though, the bun is retiring enough so as not to overwhelm the fillings, though it does get soggy in the face of a pile of carnitas with refried beans, onions, lettuce, salsa, spicy mayonnaise, and guacamole. This makes it harder to eat, but also tastier.

El Pelon also serves burritos of some repute. Each of these rollups features black beans, rice, cheese, lettuce, salsa fresca, and crema in a flour tortilla; you can also add hot sauce (recommended) and, for an extra charge, guacamole (also recommended). The basic bean and cheese, or a burrito with calabacitas (a mix of squash, zucchini, and other vegetables), will please vegetarians and carnivores alike. Meat eaters can also choose chicken, carnitas, carne asada, or fish.

Then there’s the granddaddy of burritos, a bruiser called El Guapo: the handsome one. I can’t say it’s aptly named. El Gusto might be better for this pile of grilled steak, rice, beans, fried plantains, cheese, fire-roasted salsa, lettuce, and crema. It’s not particularly traditional — plantains? lettuce? — but who cares. This is the kind of big, big-flavored, low-priced food that makes El Pelon a natural in this college neighborhood. Victory is theirs, and ours.

Also on The Angle: A tax break that is breaking us