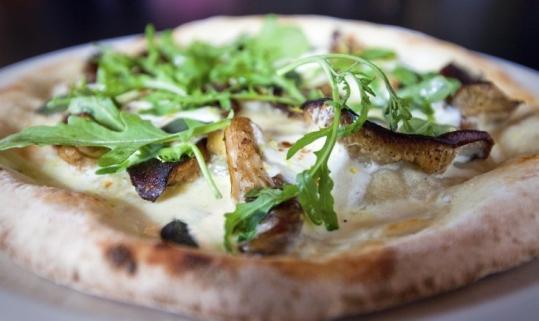 Many months before the first paying customers would crowd into Posto, even as the owner was awaiting his wood-fired oven and tinkering with pizza dough fermentation, neighbors in Davis Square were already craving a slice. “Mmmmmmm. I’m hungry,’’ opined one Facebook follower last fall. It’s rare that a Somerville restaurant opens to so much anticipation. Then again, this is a new kind of establishment for Somerville.

Posto, which finally opened on a warm weekend earlier this month, with lines stretching out the door, is an upscale pizza parlor that also serves creative antipasti and an extensive array of drinks — and welcomes kids. The owners added sleek furniture and funky floor tiles to the cavernous space, which was last home to Green Tomatoes II. Flames from the pizza oven light the open kitchen. Young diners are given crayons and coloring pages, as well as their own menus.

For grownups, pizza is at the center of the menu, and Posto offers 10, from a basic margherita ($12) to a white arugula pizza ($18) with sliced garlic and hot chilis. The crust of the margherita, topped with tomatoes, mozzarella, and basil, is thin but not too crisp, still smoky from the oven. Shiitake ($17; pictured) is one of our favorite pizzas, with a Parmesan cream sauce and lots of the earthy mushrooms, though the cream deflates the crust. We miss the firm wood-fired crust of the less sauce-y pizzas.

On our first visit, just a few nights after Posto opened, the margherita is remarkably salty — so much that even our 4-year-old notices. An early glitch, we decide. When we return a week later, the pizza has normal sodium levels. Three ingredients can be added to any pie: soft farm egg ($3 extra), white anchovies ($3), and prosciutto ($5).

We love a menu with surprises and Posto has a remarkable one: pig’s ears ($7). The appetizer is breaded and fried, not at all chewy, served with a wedge of lime. A salad centered around favas, peas, and green beans ($12) is excellent, full of spring flavors; the peas taste as if they’ve just been plucked from their pods. Posto offers three pastas, including a creamy bucatini amatriciana, pasta with Parmesan and guanciale, a kind of Italian bacon similar to panchetta and made from pork cheeks. Agnolotti dal plin ($14), tiny ravioli filled with veal and chard, are also oversalted one night but otherwise quite good. Regular nightly specials tend to be modest, from roast chicken to spaghetti and meatballs.

Posto doesn’t take reservations, so getting a table on a weekend night may require a wait or a stint at the bar. As the weather warms, Posto plans one more enticement: outdoor tables along Elm Street. Get in line now.