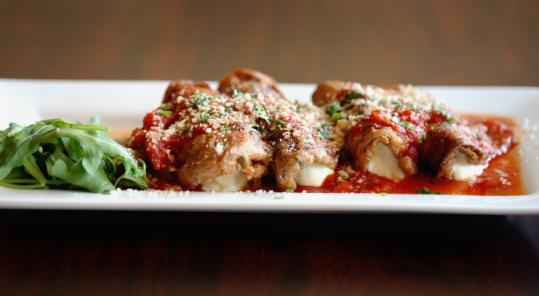 The Talk is a family affair, a group that includes Kaz Keuchkarian and his wife, Lisa, (it’s her family’s Italian recipes on the menu), son Kaz Jr., who’s at the bar; son Stephen, who’s at the bar and working the dining room; daughter Nicole, a waitress; Kaz’s sister Lisa McKeen, also a waitress; his brother Armand, a host; brother-in-law James McKeen, head chef; brother-in-law Mark English, at the bar; and Jen Devlin, who’s not technically family, but has been with this crew for five years.

Kaz Jr. owns Talk of the Town Diner a few blocks away, which he took over from his father six years ago. They bought it in 1998. The elder Keuchkarian schedules everyone for shifts at the diner (breakfast and lunch) and the Talk (lunch and dinner). He and his siblings were raised in Watertown; their grandfather owned the New Yorker Diner in Watertown.

The Talk opened last summer. Settle in, and you’ll soon be nibbling hot, crusty rolls. In the classic eggplant involtini (pictured, $9), slices of eggplant are rolled around creamy ricotta and spinach, topped with a bright marinara sauce. It’s a fine version with lots of flavor. Pommes fries ($7) are slender wisps of crisp, addictive potato sticks, fried with red onion and tossed with Parmesan.

Chicken Parm ($15) comes with more of that bright marinara. An “authentic Greek-style kebab’’ has fine lamb ($17), and comes medium-rare as ordered; the peppers and onions taste sauteed rather than grilled. The 8-ounce Angus burger ($7) is moist and well made.

Polpette ($8), the traditional meatballs, are dry. Grilled thin-crust pizza ($8), topped with tomato-basil sauce, has a lackluster crust. Veal piccata ($18) offers tender morsels of meat in a lemon-wine sauce. It tastes of lemon only when we add fresh juice, and the penne with it has no flavor. Neither is made with a trace of salt.

One of the best dishes is broiled scrod ($15) with a fine crust of nicely seasoned breadcrumbs; the fish flakes beautifully at the touch of a fork. Armenian-style pilaf, with flecks of thin spaghetti, is delicious. A side of ratatouille, with more of the delectable marinara, has no taste.

In this one-time bank space, a vault in the back is a popular table to reserve. One night, six young women are enjoying themselves near us. Four men who could be their grandfathers are part of another group. Kaz Keuchkarian’s family and friends jam into one of the comfortable booths but no one forgets the diners around them.

This is a likable place. You’re greeted warmly, served by a waitress who’s interested in you, and you get plenty on the plate. Once the folks in the kitchen amp up the salt and seasonings, the menu will match the very appealing ambience.