Our journey from passionate amateurs to pros

A historian and a sociologist, married with health insurance, seize the notion of making a hands-on project together. Like opening a first restaurant in a deep recession. What were we thinking? 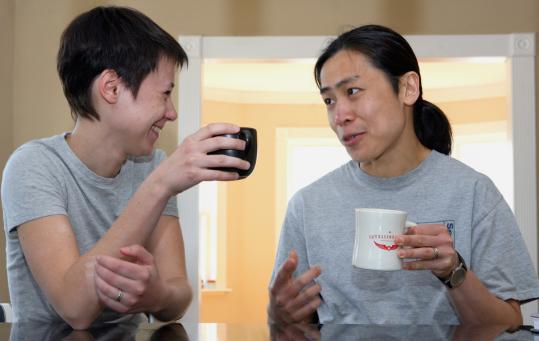 We realized when we woke up today that we’re supposed to open the doors to our new restaurant in two months. We can’t really claim to be surprised, since we’ve been working on it since October. It’s just that between the endless details and the fact that most of what we’ve done, up to now, is basically intangible — essentially a bunch of permits and thoughts on paper — the date snuck up on us. So far, what we have to show for our efforts are countless hours of heartache, anxiety, some elation, nights when we were too worried to sleep, and hundreds of miles on our bikes chasing permits and people in the winter cold.

The irony here is that we started this venture in large part because we were hoping to trade our abstract, power-pointing, health-benefits-included office jobs for something where we would actually see the results of what we do, where we’re able to work with our hands, make things, and count smiles and bruises at the end of each day.

So we decided to open a small restaurant in an unlikely location in the middle of a recession.

We’re somewhat unlikely restaurateurs. We’re married, on the cusp of our 30s. One of us is a historian, specializing in the social history of the engineering profession. The other is a sociologist who happens to work for an IT consultancy. Having spent the first four years of our relationship pursuing entirely different careers and hobbies, we eventually decided we needed a project to work on together.

So we started cooking, for no reason we can really discern. This is the point in the narrative where we really should spin romantic tales about food in our childhoods, but they would be pure fiction. Diana grew up eating sandwiches and blini because her mom cooked nothing else. Tse Wei ate the same thing for lunch every day for three years in middle school. Diana’s grandmother wouldn’t let her cook because it wasn’t fitting for a modern woman. Tse Wei’s wouldn’t let him because she knew he’d screw it up. Getting into food was one of those things that are no less life-changing for their randomness.

We taught ourselves to roast chickens and fillet fish. Peeled vegetables and scrubbed pots in a lot of restaurants, including the Raffles Hotel. Learned to milk cows on a New Jersey farm (it took a month). Cooked dinners for friends and friends of friends: braised lamb shoulder; cured ox tongues; heirloom tomato salad versions one, two, and three; rhubarb doughnuts; chocolate-elderflower sorbet.

And eventually, we found ourselves thinking that the people we knew who made their living at a craft were the happiest, most interesting people we knew, and decided to join them.

The restaurant will be called Journeyman (we wanted something that evoked a sense of craft), and will serve one menu each night, a five-course tasting, with a short, carefully selected wine list focusing on unknown gems, frequently from young, organic, or biodynamic producers. Sanborn Court is an unlikely place for our venture, hidden in plain sight on a street with virtually no pedestrian traffic in the heart of Somerville’s Union Square. This may not read like a template for wild financial success, but we reasoned that if we were going to make a leap of faith, we were bloody well going to do something we really believe in.

We believe in making people happy. We believe that people are prepared to go out of their way for food that is refined, original, made with seasonal ingredients, and above all, delicious. We believe that some of the most exciting, most honest, and downright tastiest wines available today are being made in places most people have never heard of. We believe that many of the trappings of fine dining — like tablecloths and long introductions of dishes — are unnecessary for a fine meal. Others, like good stemware and mignardise (we like this word, which means little sweet things), are underappreciated. We believe people actually quite enjoy not having a choice about what to order.

And all this may be misguided idealism, but as a generous friend recently told us (and we decided to believe her), this is such an incredibly unlikely venture that we might actually make it.

When we decided to open a restaurant, we gave ourselves 12 to 18 months to launch the plan. Given the realities of Boston real estate, at least half of that time was earmarked for finding a suitable location. We began by looking at Union Square in Somerville, and Maverick Square in East Boston, which are vibrant, rapidly developing communities. In spite of rising incomes, both places are still largely the preserve of cheaper eateries. Barely a month into the search, we found ourselves standing in an old pasta sauce factory literally steps away from the site of the Union Square farmers’ market. It was pure accident that we were in there at all, but the more we thought about it, the more we realized it was exactly what we were looking for — an unusual, memorable space with low rent, a little out of the way, and in a neighborhood bursting with promise.

The next week was probably one of the most stressful we’ve ever had. Between excitement at our good fortune and fear that we were being precipitate, we probably slept eight hours a night — between the two of us. But at the end of the week, a little shaken, we signed a letter of intent with our landlord. We were six weeks into our estimated 18 months. In short order, we had found an architect (Campbell Ellsworth, an MIT grad who used to be an opera singer), a kitchen designer (his name is Al McDonald, and his favorite subjects are grandchildren and custom-built refrigeration), a floor plan, a capital expenditure schedule, and several cash flow projections.

By mid-December our liquor license application was approved by the city, and a month later we applied for a building permit to renovate the space. Along the way, we somehow acquired the trappings of a real business: a website, a mailing list, Facebook and Twitter accounts, an attorney, an accountant, and a copy of QuickBooks.

At the end of February, things began to subtly get more concrete. We recently went from talking with providers of services to talking with providers of things. We spoke with five companies about installing a HVAC system. We interviewed four general contractors in one day. There was absolutely no way, they assured us, to get this done for under $100,000 — not counting any of the kitchen equipment. We started writing very real checks. (More later in the series about where this money is going.) The proposals from contractors may seem like more pieces of paper, but they’re the first connection between the restaurant in our heads — the one visible only on a floor plan that’s increasingly firm but still in flux — and the establishment we actually build. It’s a first indication of what’s possible on our frighteningly tight budget.

Caught up in a steady stream of meetings and deadlines since October, we’ve hardly had time to be nervous, as perhaps we should be. The nerves are an undercurrent; we’re always aware, as we talk to farmers, fill out forms, or even just have breakfast together, that we’re putting a great deal of our savings and ourselves into this venture.

But having to clear hurdle after hurdle builds our confidence and keeps us focused on individual, manageable tasks, and we slowly feel the pieces fall into place. The coming weeks will see a lot of dust and scrubbing, number crunching and decision making, and at the end of it, we hope, a room filled with the sound of people dining, and their laughter.

This is the first of a three-part series on opening a restaurant on a modest budget. The authors, who are the owners of Journeyman, which will be located at 9 Sanborn Court, Union Square, Somerville, will also write about the economics of restaurants and decisions that shape diners’ experiences. The two blog at www.journeymanrestaurant.com, and can be found on Twitter (eatatjourneyman) and Facebook. Part 2 will appear in a few weeks.