Can Bombay find an identity in South End? 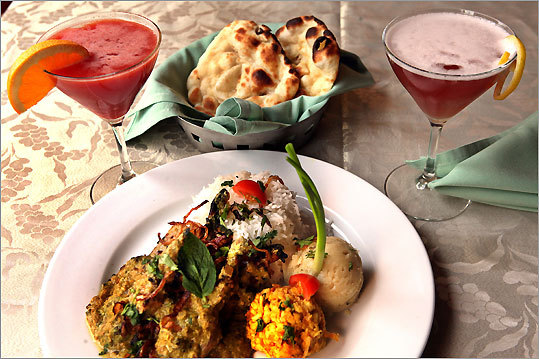 At Bombay Club, marinated lamb chops are grilled on a tawa, a cast iron griddle, and served with a sauce of yogurt, cashews, and mint chutney. (Michele McDonald for The Boston Globe)
By Devra First Globe Staff / February 24, 2010

Bombay Club is haunted. Unfortunately for the Indian restaurant, which opened at the end of December, its space is inhabited by the ghost of Pho Republique. In this room, the Pho crew served fun food and strong drinks to a cross-section of the South End for more than a decade. It was a true neighborhood hangout, and it is missed. When people try to eat tikka masala here, it just hurts. They are reminded of what they have lost.

The bar, the light fixtures - heck, even the gong - those are all still here. Owners Vinod and Shikha Kapoor, who moved Bombay Club from its longtime Harvard Square spot, have lighted the space more brightly. Walls are now painted in earth tones and swooping arabesque designs. In one corner, burnished copper vessels line a table, waiting to serve the weekday lunch buffet.

The Kapoors have been serving Indian food to Boston at one location or another since 1980, and they know how to run a restaurant. But there are plenty of restaurants in the South End, including Mela, another Indian spot. Their challenge will be drawing people in, and making Bombay Club stand out. Judging from the emptiness of the room on several visits, they have a way to go.

It’s not that there aren’t good things to eat here. Head chef Sridhar Periyasamy comes from Bukhara, a well-known hotel restaurant in Delhi; he also cooks at Masala Art, the Kapoors’ Needham restaurant. One of his specialties is the rawa dosa, a truly excellent version of these South Indian crepes. They are made from rice flour and semolina, and they are paper-thin and crackly, with lacy edges. They’re wrapped around potatoes and served with a warming, slightly spicy lentil soup; vada, doughnut-shaped fritters; and idli, steamed rice cakes. (These last bear an eerie resemblance to the candy Satellite Wafers, those Styrofoam-like pods filled with sugary beads.)

And there are some truly inventive dishes on the menu, which is divided in part by geography, in part by confusing headings such as Bombay Club originals, Bombay Club’s greatest hits, the main event, and so on. Where does one end and the other begin? It’s hard to know where to look for, say, a chicken entree.

But let’s start with cauliflower. Gobhi Gulistan arrives looking like a little mountain. Why has the food been piled so high? On closer inspection, you realize it’s actually a whole head of cauliflower, cooked till it’s meltingly tender, then topped with a pale green sauce of mint, yogurt, and cashews. It’s a clever and tasty construction, the bright and creamy sauce pairing well with the cauliflower’s mild brassica flavor.

Lychee paneer sounds like a terrible idea, but it’s genius. Sweet lychees are simmered with cubes of paneer cheese in a mild, reddish curry. Cooking them concentrates their sweetness, but they’re still juicy and perfumed; texturally and visually, they are reminiscent of scallops. The dish is unexpected and wonderful.

Invention isn’t always perfectly executed. Why are tandoori chicken tacos served in Tostitos Scoops? It’s not a bad idea, but if you’re going to go there, the filling of minced tandoori chicken would be much better in warm corn tortillas with avocado and crema. And, if you’re going to go there, go there: A separate menu of creative Indian snacks would appeal to the drinking crowd.

Chicken anarkali is a pomegranate-based curry, dark and sweet-sour. It’s good, but not nearly as memorable as the dishes mentioned above. (Bombay Club does vegetarians proud.) Lamb tawa gosht is recommended to me on each visit, and I order it several times to be sure I’m not missing something. Marinated lamb chops are grilled on a tawa, or cast iron griddle, then served with a sauce of yogurt, cashews, and mint chutney (gobhi redux). The chunky sauce obscures the meat, which at any rate is tough and overdone. With thick, juicy, medium-rare lamb chops on the plate, things would look very different.

The greatest hits of US Indian restaurants are all here, if it’s saag paneer or chicken tikka masala you’re after. These standards are just that, solid renditions of the dishes you’ve come to expect. There is a nice array of naan - topped with poppy and cantaloupe seeds, stuffed with spiced lamb, and so on. On some visits, it’s a bit dry. Lassi here is good, tart and complex.

Bombay Club offers a full roster of cocktails - lychee martinis, mango-rum lassis, and more - as well as a short list of wines. When a group of women arrive for dinner, they’re offered fruity cocktails. When their husbands arrive a short time later, the men are offered beer. This kind of beverage-o-typing is as outdated as the horrid dance music one night, blasting sadly at an empty bar.

If Bombay Club wants to banish the ghost of Pho Republique, being a solid Indian restaurant may not be enough in this neighborhood of restaurants. It needs to create an atmosphere and an identity. Cozier, hipper decor, a soundtrack of modern Indian pop, screenings of Bollywood musicals with themed cocktails and masala-dusted popcorn, a separate street food menu for grazers, a yoga brunch with lesson included - any of these could go a long way toward making the space feel more intentional, less dropped in wholesale from elsewhere. When moving to a new location, a bit of translation is required.