Tuna at risk? Sushi chefs find other fish in the sea 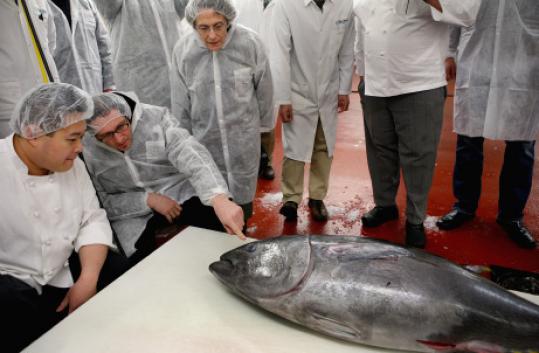 At Miya’s Sushi in New Haven, you won’t find endangered bluefin tuna on the menu. For that matter, you won’t find many traditional sushi staples. Miya’s is part of a sustainable sushi movement that’s growing nationwide.

“I don’t miss the ingredients,’’ says chef Bun Lai. “It forces me to be much more creative and search for other ingredients. In my experience, if you stick to what you actually believe in, people will follow you.’’

Tim Cushman, of o ya in Boston, does serve bluefin. His customers expect it, he says. “When you’re running a business, it’s tough. You want first and foremost to give people what they want.’’

Bluefin tuna is only the beginning of the debate when it comes to sustainable sushi. But as the fish perhaps most prized by sushi connoisseurs, it’s an important symbol.

From its belly comes toro, the fatty meat that melts in the mouth. But each bite brings the bluefin closer to extinction. The species has been catastrophically overfished, with high demand making it a lucrative catch - one bluefin sold for $177,000 at auction in Japan last month.

In October, the International Commission for the Conservation of Atlantic Tu nas reported that stocks are probably below 15 percent of the historical level. The World Wildlife Fund included the bluefin on this year’s list of most threatened species.

Some restaurants are responding to the plight of this and other species. In addition to Miya’s, Tataki Sushi & Sake Bar in San Francisco, Bamboo Sushi in Portland, Ore., and Mashiko in Seattle use only species that aren’t threatened or raised in a way that could be detrimental to the environment.

Next month, at a Convention on International Trade in Endangered Species meeting in Qatar, countries will vote on whether to ban international trade of bluefin, 80 percent of which is sold to Japan. “This is the moment to save the fishery,’’ says Susan Lieberman, director of international policy with the Pew Environmental Group. “There are alternatives for the consumer.’’

One such alternative is Kindai tuna, a farmed bluefin developed at the Fisheries Laboratory of Kinki University in Japan in 2002. Most farmed bluefin are raised from young caught in the wild, which depletes stocks. Kindai tuna are raised from eggs, through a process called closed cycle farming, in which the eggs are obtained from other fish that were grown from eggs hatched in the same lab, thus reducing the chance of overfishing the tuna.

Previously available in New York, D.C., and Chicago, it is coming to Boston restaurants for the first time. Last week Aka Bistro hosted a presentation and tasting for a small group of chefs, restaurant managers, and journalists at the Boston headquarters of Kindai distributor True World Foods. Slated to open in Lincoln in mid-March, Aka will be the first sashimi bar in the Boston area to feature Kindai tuna.

Aka chef and co-owner Chris Chung previously worked at Uni Sashimi Bar in Back Bay, where he says he hadn’t used bluefin for a while. “I’ve been trying to find any new way to get tuna that’s sustainable and has lower mercury,’’ he says. “A lot of people care. In the beginning, they asked why I don’t carry bluefin tuna. A few customers came once a week, and they started to explain to people they know, too. People understand.’’

Over the weekend, Copley Square Italian restaurant Sorellina also offered Kindai, served raw with cucumber gelee, radishes, chilies, and olive oil. Executive chef Robert Jean plans to start featuring the product regularly next month. He says it will replace wild bluefin on Sorellina’s menu if he can get it consistently.

“It tastes the same as other bluefin tuna,’’ he says. “It’s comparable in quality and flavor. I tend to like it a little better, because it’s slightly less metallic.’’

Kindai tuna is more expensive than wild. Wild bluefin might go for around $20 a pound at wholesale, while Kindai could be in the mid-$30 range, according to True World Foods national marketing assistant manager Yuji Haraguchi. Wild bluefin appetizers that cost diners slightly less than $20 at Sorellina might be priced at $20 to $25 when made with Kindai, Jean says.

And not everyone finds Kindai tuna a viable alternative.

“I would never serve it,’’ says Casson Trenor, author of “Sustainable Sushi: A Guide to Saving the Oceans One Bite at a Time.’’ “Technically, it is less destructive than traditionally ranched bluefin. That doesn’t make it OK. I believe it’s leading people in the wrong direction.’’

Part of the problem is that bluefin, large carnivores, are high on the food chain. A traditionally farmed bluefin requires 20 pounds of fish for each pound of tuna produced. For Kindai, the ratio is less wasteful, Trenor says, but that’s not good enough.

Instead, he says, we need to change our approach to sushi: Do we need to be eating bluefin at all? Trenor - who has worked with Tataki, Mashiko, and Miya’s in their quest to become sustainable - suggests sushi chefs examine what species they offer, change their menus with the seasons, and use ingredients that are plentiful close to home.

Awareness of sustainability is trickling into the larger consciousness. Several weeks ago, Target announced the elimination of farmed salmon from its stores nationwide. M&J Seafood, the largest independent seafood supplier in the UK, dropped critically endangered European eel and overfished North Atlantic halibut. And the European Parliament agreed to support the ban on the international trade of bluefin.

Should the ban pass next month in Qatar, Trenor says, it would send ripples through the sushi industry - making bluefin more expensive while sending the message that change is on the way:

“A lot of sushi restaurants are in denial. Sustainability is not a choice. It’s coming. The sushi industry is falling apart. It’s eating itself, and we need to adapt to that.’’