A bistro with good taste

Menu, service make for a memorable night out 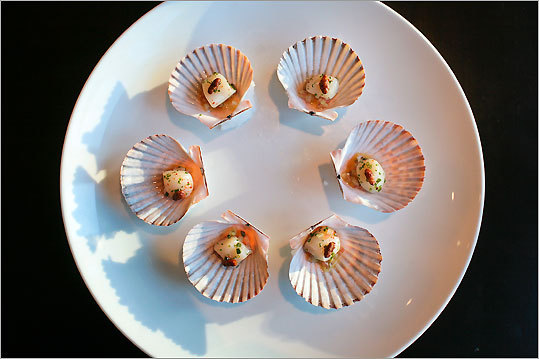 Marinated bay scallops, served in their shells, dabbed with a tomato and caper marmalade. (Aram Boghosian for The Boston Globe)
By Devra First Globe Staff / February 10, 2010

Bistro du Midi is a Restaurant with a capital R. None of that upscale pub grub that’s been going around. No waiters who want to be your pal. Just classic food and well-mannered service, all in good taste. It’s been fun eating mac ’n’ cheese and sliders, but being guided through the wine opus (it’s too long to call a list) by the sommelier and cosseted by the waiters, one remembers: The old rituals of dining can be awfully nice. It’s a pleasure to go to the rare new restaurant that adheres to them.

Not that Bistro du Midi is stuffy, snooty, or even particularly expensive - most of the entrees are under $30. It’s simply polished, despite being only a few months old. The space used to be Excelsior, and Biba before it. For Bistro du Midi, restaurateur Kenneth Himmel (Grill 23, Harvest, Per Se) partnered with London-based Marlon Abela, whose restaurant group operates the A Voce restaurants in New York, Umu and the Greenhouse in London, and more. They take hospitality seriously. (Himmel’s other recent local opening, Post 390, remains a work in progress.)

The restaurant is situated on two levels, a more casual bar area with a menu to match downstairs, and a more formal dining room upstairs. There’s a fireplace and a view out over the Public Garden. And there is some wonderful food, influenced by the South of France and executed by chef Robert Sisca, formerly sous chef at New York’s acclaimed Le Bernardin, which specializes in seafood.

Indeed, seafood may be Bistro du Midi’s best event. Marinated bay scallops are as light and lovely as dishes come. The sweet little bites are served in their shells, each perched atop a tiny pillar of salt that itself looks like a scallop. They’re dabbed with a tomato and caper marmalade, just enough to add interest without overwhelming the delicate mollusks.

A first course of stuffed calamari is a must for anyone who likes squid. Four baby calamari are filled with a mixture of leafy greens, bread, egg, and more, then slowly poached in lobster jus. This results in what may be the most tender calamari of all time; they are nearly silky. They’re topped with little fried squid, and surrounded by more of the flavorful lobster jus.

The plumpest mussels arrive in a bowl, and a server pours broth over them tableside. It’s a take on mussels mariniere, the lightly creamy broth flavored with pastis. The one problem: The dish is served without crusty bread to sop up the heady liquid.

There are more mussels and calamari in a dish of chitarra, the strands of pasta touched with saffron. The seafood and noodles soak up a deeply flavorful, garlicky broth.

And shellfish bouillabaisse features mussels, calamari, cockles, prawns, crab meat, and dorade in a briny, red broth. It’s served with toasts, rouille, and shredded gruyere. In its plenitude, it’s more satisfying than a traditional version that contains just potatoes and fish such as rouget and loup de mer. A dish of halibut with chorizo, chickpeas, pimentos, and raisins also falls short. The fish is drastically overcooked, while the garbanzos are undercooked. The chorizo is so subtle one can barely taste it.

But despite the occasional misstep, a Provencal restaurant may now be one of the better places in town to eat New England seafood. (Can someone please explain why we don’t have more upscale fish restaurants?)

There’s more to the menu, however. It begins with “petites bouchees,’’ or small bites, such as the scallops. From there, it’s worth sampling the barbajuans, the French Riviera’s take on the empanada. The deep-fried pastries come six to an order, with three different fillings: pumpkin, goat cheese, and lamb. All are good, savory and complementary tastes cased in flaky dough.

Fried artichokes are even better, golden and crisp, with garlicky aioli for dipping. I could eat them every day. Preferably somewhere warm, on someone’s yacht. The closest I’m likely to get is a patio overlooking the garden. The restaurant plans to open one come summer, when it will also roll out a long list of roses.

Pissaladiere, the mandatory Provencal tart, looks like a dull brown mush but tastes vivid. The flatbread is topped with caramelized onions, anchovies, and olives, a combination with which it’s hard to go wrong. The tart is rustic and uncomplicated, which is not generally what this refined restaurant does best.

On the other hand, beef daube is a stupendous version of the Provencal stew, deep and dark and rich, studded with olives and accompanied by olive oil-rich mashed potatoes. Stew is rarely described as voluptuous. This is like something out of a French version of “Like Water for Chocolate.’’ It’s both old-fashioned and sexy.

Venison tenderloin is cooked perfectly, the slices of meat very rare at the center, but the accompaniments of quince, root vegetables, and chestnuts fade into the background. For those who want to really taste their venison, this may not be a bad thing.

Wonderfully light gnocchi are served with wild rabbit stew that tastes domesticated; the meat is very mild. Likewise, rabbit rillettes don’t have a strong taste. The spread is dense and difficult to pry out of the little casserole dish it comes in. Tastes like chicken? Not at Bistro du Midi, where chicken doesn’t lack for flavor. A bird stuffed with ricotta, pine nuts, and lemon confit is roasted to order, then carved at the table and portioned out for two to share. It’s a darn good roast chicken.

The wine list begins with a selection of bottles under $70, then sets out on a price-is-no-limit expedition through the regions of France and the rest of the world. It’s no surprise that Bistro du Midi has a strong program; Excelsior did before it, and wine is a priority for Abela. If you are wont to splurge, and particularly if you are drawn to Burgundy, this is a wonderful place to play kid in a candy shop. But at the lower end of the list, where you will pay relatively more for the privilege of paying less, sommelier Kelly Coggins will guide you with enthusiasm and an eye toward value.

Another delight is that Bistro du Midi does not stint on dessert. Pastry chef Sarah Ewald turns out soulful sweets that are creative while hewing to tradition. You must decide at the beginning of your meal whether you want a souffle - of course you do - and whether it will be chocolate or Grand Marnier. Both are textbook puffs, but I prefer the latter for its subtlety.

A frozen almond and orange cake features layers of pastel hues and meringue. It’s a lovely creation with delicate flavors, accented by fine strands of candied orange zest. Clafouti gets heartier, an eggy pancake that’s a bit dense, studded with very boozy cherries. Perhaps my favorite is a prune and Armagnac tart with pine nuts and pine nut ice cream - winy and herbal and rich all at once, the flavors anchored in buttery pastry.

If that’s not enough, at the end of the meal each table is presented with a complimentary jar of nougat and calissons, the Provencal confection made from nuts and fruit. As you pry the sticky candies from their wrappers, you can practically smell lavender on the breeze.

But as memorable as the food is the care the staff takes with customers. One evening, I witness someone struggling to see his menu in the dim light without reading glasses, something I’ve noticed before in any number of local establishments. But then, a first: A server appears, opening a case with a flourish. It’s full of spectacles, magnifying glasses, and penlights. This consideration says something about the demographic expected for dinner. But it also says the restaurant doesn’t compromise. Bistro du Midi is intent on providing atmosphere, but not at the expense of comfort or practicality. It’s intent on serving food and wine that don’t kowtow to recession fashion. It’s intent on being a Restaurant with a capital R. It pulls it all off with aplomb.