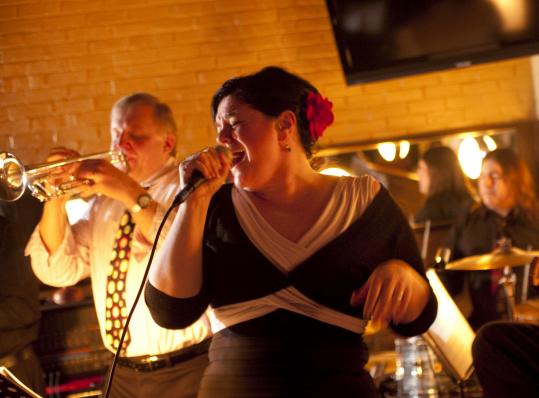 Jordan Valentine & the Sunday Saints play soul music to entertain the crowd at the Rosebud Diner in Somerville. (Erik Jacobs for The Boston Globe)
By Jonathan Perry Globe Correspondent / February 5, 2010

SOMERVILLE - The only thing hotter than the red vinyl upholstery hugging the booths and benches of the Rosebud Backroom Bar and Grill on a recent Saturday night was the band facing them. It was 10:30 p.m., and Jordan Valentine & the Sunday Saints, a hard-hitting local R&B outfit, had begun blasting out crisp covers of Stax-style soul, as well as a clutch of robust originals that sparked the place to boisterous life.

Before long, some of the crowd mingling at the bar ventured into the surprisingly spacious back room - all wall-length mirrors, dim lighting, and decades-old carpeting - to catch a closer look and louder earful. A few folks got up from their booths and danced, beers in hand. Valentine, goosed along by a nattily attired three-piece horn section, belted out Detroit siren Laura Lee’s “Are You Doing Me Wrong’’ as if she were headlining the Apollo rather than what looked like a rotary club banquet hall. Later, when the band came back for its second set, more people streamed in. The applause grew louder, more vociferous. So too, it seemed, did the band’s performance.

So go the weekend nights inside the cozy Rosebud in Davis Square, where, for the past few months, a lively mix of music programming has been gaining momentum, mostly via word-of-mouth and a clientele curious about the lounge tucked away behind the iconic diner car at 281 Summer St. If the decor looks a little dated, that’s because it is. During its 1970s heyday, the space, built in 1964, was home to a disco nightclub called “The Surrey Room.’’ It also operated as a bar into the late ’80s, before briefly reopening as an Italian restaurant a few years ago.

“Back in the ’70s, this was one of the biggest disco clubs around,’’ said bar manager Aimee McGrath, who, until recently, had never booked shows. “When I first saw this room, I thought straight away that it would be good for live music because it’s got that great retro vibe.’’ The Rosebud has been hosting bands since November. So far, McGrath said, “it’s been working out fantastic. Everyone who comes in here is surprised at the space.’’

That includes Valentine, who happens to be McGrath’s booking partner. “It’s funny because the Rosebud Diner is so well known,’’ said Valentine, catching her breath between sets. “But people didn’t know there was a space back in here. Now the word’s getting out.’’

The singer was initially tapped to host a soul and funk-themed DJ series Valentine dubbed “The Red Rose Soul Club’’ at the Rosebud every Friday from 10 p.m. until 1 a.m. (Tonight’s installment features Soul Shake DJs Deano Sounds and Jay spinning rare soul.) Before long, though, Valentine began bringing in her real-life soul band, the Sunday Saints, to supply Saturday night music. McGrath and Valentine have since expanded the idea, booking local acts like the Downbeat 5 into the joint every Saturday. (The local indie-folk duo Luca Luna is in the house tomorrow night).

Now that the weekends have taken hold, the McGrath and Valentine have started a Sunday night live music series, with an emphasis on rootsy fare. The Coachmen, an old-fashioned country rock band from Waltham, played the room recently, as did Boston’s veteran boogie piano master Preacher Jack.

“We want to ramp that night up,’’ said Valentine, who is herself a newcomer to booking local bands - albeit a well-connected one who has built a deserved reputation as one of the city’s must-hear singers. “Not having done this before, I thought that it would be a struggle. But it’s been really great. And from a musician’s perspective, there was a need for this room, so it’s come along at the right time.’’

Indeed, amid the constant call for new places to play and hear live music around the city, the onetime Davis Square disco seems a welcome addition with an endearingly no-frills, down-to-earth disposition. There’s no stage per se, just a section of the room where bands set up. But the sound system does the job, and the rust-red carpeting seems to soak up some of the stray noise - a big plus for a neighborhood eatery - without gobbling up the acoustics. Best of all, the bar’s never far away.

“Oh, there’s absolutely a need for a new space for music,’’ said John Brookhouse, who plays guitar with local roots rockers the Dirty Truckers. “I can come in here, see people I know, and it’s like a walk-in scene for me.’’ Brookhouse lives around the corner in Davis Square and had dropped by to catch the Sunday Saints’ set with his pal, Watts guitarist John Blout. Both of them looked as though this convivial spot was exactly where they wanted to be on a Saturday night.

“It’s still so new to people,’’ said Blout, surveying the modestly filled room. “When I told some friends I was coming here to the Rosebud tonight, people said, ‘Where are you going? A diner?’ ’’

THE RED ROSE SOUL CLUB Featuring Soul Shake DJs Deano Sounds and Jay, are at the Rosebud Backroom Bar and Grill tonight, starting at 10. No cover. Go to www.rosebudbardavis.com for a complete schedule.