The crowds are pouring in for pasta, pizza, and meaty delights at Coppa 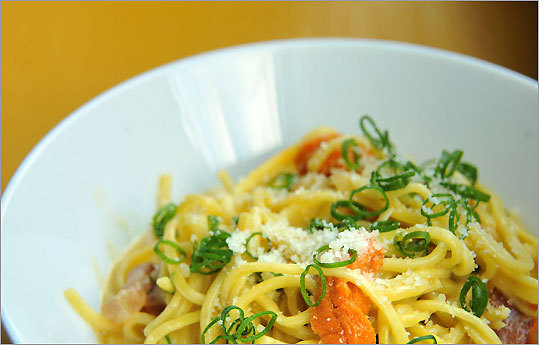 Chaos. Tasty, tasty chaos. An elbow’s in your ear; it belongs to the girl who’s wedged into the space between her friend’s barstool and yours. You’ve been waiting an hour that feels like two. Or has it been two? People come in, look at the crowd, and turn on their heels. You were told an hour and 40 minutes till you could have a table, but now it’s been two and a half. Or you were told an hour and 40 minutes, so you left your cellphone number and went down the street for drinks, only to have your phone ring the second the bartender gets your cocktail in her shaker. Chug! Chug! You want that table. An elbow’s in your side; it belongs to the guy trying to put his coat on in a space the size of a magician’s vanishing box. He vanishes. You’re seated, finally, famished, a little tipsy. A bite of something’s in your mouth; it’s carbonara spiked with sea urchin, the chaos quiets, fades into the background, this is so good. Chaos. Tasty, tasty chaos.

Coppa, a joint venture from chefs Ken Oringer and Jamie Bissonnette, opened two months ago. It serves Italian-inspired small plates, salumi, pasta, and pizza crafted from local, seasonal ingredients. And it shoehorns all the energy and crowds of nearby tapas bar Toro, another Oringer-Bissonnette twofer, into a much more intimate space. Coppa only seats about 40. (Note to restaurateurs everywhere: Open tiny restaurants and you will always appear successful.)

Between the menu, reasonably priced and hugely appealing, and the reputations of the partners, Coppa had a following before it even opened. This means that if you want to eat here, you have to be willing to let go of control, to allow the universe to guide you to a seat in its own time. For those who live in the neighborhood, the system of heading in, putting your name on the waiting list, and going elsewhere till a table is available works well. Others will give up. Is it worth waiting two hours to eat here? Is any restaurant worth waiting two hours for? That’s a question you’ll have to answer for yourself. But the food at Coppa is very, very good.

Sometimes it’s stunning. That spaghetti carbonara is rich with egg and pancetta, and then there’s the unexpected uni. Its particular, briny flavor layers with the ham and egg like a millionaire’s breakfast. It is the lottery ticket, and you are the winner. Who would have thought this would work so well? It does. I ordered it twice, “just to make sure.’’ If I could have justified it, I would have ordered it again.

Also here to blow your mind: brains. Of calves. Inside ravioli. Don’t be squeamish now, because Coppa makes use of such animal parts with some frequency. Bone marrow finds its way onto pizza, lardo into meatballs, and head cheese and tongue are prepared in house. These ravioli del cervello are tiny packets of perfect pasta, the filling lush and savory and, really, not particularly brainy-seeming. They come with brown butter and sage.

The apparent humility of a dish like cavatelli di pollo is a sham. Chicken sausage with pasta, yawn. But the cavatelli are showoffs. Ridged and somewhat larval in appearance, they have attained the state of perfect chewiness. Ah, so this is what pasta should be. The cavatelli are served with fennel-tinged sausage and slow-cooked broccoli, with an herbal kick of oregano. It’s a dish you could eat often and not get tired of. Many of Coppa’s pasta dishes are.

Saltimbocca is made with sweetbreads, the tender offal wrapped in prosciutto with sage leaves, then fried and served over oyster and maitake mushrooms cooked with soy. Saltimbocca is generally a dish with a cheerful, uncomplicated mien. Here, the mushrooms make it deeper, boskier, and more mysterious.

Bissonnette is known for his skill with cured meats and pates, and they are showcased here with a strong list of salumi. His duck prosciutto is perfect, tiny red slices, salty and satisfying. Pate de campagne is studded with pistachios, rustic but elegant. And coppa di testa turns pig head and trotters into a gelatinous delight.

Despite being named after cured pork, Coppa does occasionally deviate from meaty single-mindedness. Fluke crudo is light, clean, and lovely - slices of the raw fish accented with grapefruit, cherry pepper, and the herb perilla. Cod cured in salt, sugar, and citrus zest is seared and served with cannelini bean and citrus purees, topped with Meyer lemon and pistachio pesto.

Coppa inherited a wood-burning oven from Dish, the restaurant that previously occupied this space. Pizza comes out with a crisp-edged crust and just the right amount of char; it’s slightly breadier than one might expect. A pie topped with tomato, spicy sausage, ricotta, and red onion is excellent, the toppings applied with enough restraint that one anticipates and savors each flavor. The Blue Ribbon pizza features braised oxtail, mozzarella, tomato, bone marrow, and horseradish. It’s not as exciting as it sounds - here, the tastes blend into one mellow but muddy richness. The horseradish, however, doesn’t blend at all. Its flavor is slightly jarring. (It works much better in an excellent dish of Brussels sprouts with pancetta and pecorino.) A Sicilian Fisherman’s pie merges two favorite dishes, pizza and fried calamari, but they almost cancel each other out. A table of fervent pizza and calamari lovers agree: We’d rather eat the components separately.

Sometimes dishes arrive oversalted or dried out. Wood-roasted lamb belly with green lentils and harissa is leathery one night, pork ribs with candied fennel are another. Coppa has more dishes on the menu than it does seats. If only they could all be as fantabulous as its best offerings. But most everything is worth trying; this is one of those menus that confounds the orderer with its top-to-toe allure. A meal can become a blur, as chicken liver crostini are followed by beef heart, anchovy, and caper crostini; goat ragu by boar ragu; roasted octopus by stewed octopus. It’s a hazard of small-plates dining. (As is the bill: Those reasonably priced stuzzi and antipasti add up.)

It’s more than that, too. Coppa has a pacing issue - when a party of four orders 12 dishes, they shouldn’t arrive essentially at once. It’s early days for the restaurant, which opened at the beginning of December. But so far, my most satisfying meals here occur when I eat with just one other person and order only a few dishes. Bump up the number of guests and the number of dishes, and you’ve got chaos. Tasty, tasty chaos.

In this atmosphere, the good spirit of the staff amazes. The room is long and narrow, with a bar on one side, tables on the other, and boisterous guests all around; servers must navigate a corridor in the middle, difficult to do even without food in hand. They’re happy to expound on the finer points of the lengthy menu, as well as the wine list, which is full of intriguing and unusual Italian bottles - a gaglioppo here, a nascetta there. Most selections are under $45.

There is also an array of cocktails cleverly designed to get around the limits of a wine, beer, and cordial license. They make liberal use of bitters and liqueurs. In the summer, when people are drinking pitchers of Aperol spritz (Aperol, prosecco, and soda) on the patio, this corner of Shawmut is going to feel like the Veneto.

Coppa doesn’t really do dessert - you’ll find a few flavors of good gelato, that’s all. On a recent night, the machine was already broken. The meat slicer, however, was gliding along, inexorably reducing large hunks of cured pork to the thinnest, most delicate slivers. It’s a Berkel, a bright red machine that costs a small fortune. Priorities.

With Toro, Oringer took the bar snacks of Spain, applied his own sensibility, and created something winning: a neighborhood party with great food. With Coppa, he and Bissonnette do the same thing for Italy. They are able interpreters. This is soul food, and those lines aren’t likely to get any shorter. Which country is next?