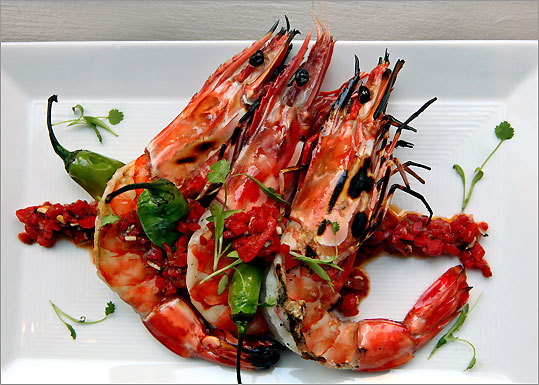 Pairings is a riddle wrapped in a mystery inside an enigma.

The restaurant in the Park Plaza Hotel used to be Todd English’s Bonfire. Whatever you thought of the food, the place at least looked distinctive, dimly lighted and done up in dark hues of crimson and coal. The black, studded entryway was more S&M club than steakhouse; even if it wasn’t your idea of sexy, it was someone’s.

Then Bonfire and English severed their connection, and the restaurant closed to renovate and rethink. It reopened in October as Pairings, with Bonfire chef Robert Bean still at the helm. Now it is beige and bland, everyone’s idea of a hotel restaurant. Why turn a room with personality into one that feels impersonal?

Then there’s the name. One would expect it to pertain to the food. Yet there are no suggested matchups of dishes and wine, or appetizers and entrees, or anything of the sort. The name’s implications certainly aren’t amorous - the only hookups likely to happen in this setting would involve laptops. On a recent evening, the one other party in the dining room is a pair of businessmen tapping away. So why Pairings?

Where the decor has lost personality, the fare has gained it, explicitly. The restaurant has a tagline. It is: “Food & drink with personality.’’ Isn’t that the kind of thing people say when they’re trying to fix you up with a less-than-comely blind date? Except then there’s usually a modifying adjective. Pairings doesn’t even get a “great.’’ This could lead a diner to expectations, also not great.

But the food does have personality, much more than that at many new restaurants around town. It even has beauty, albeit an unconventional sort, with strange fashion choices made on the plate. Bean’s preparations are ambitious and eccentric and sometimes interesting and often unsuccessful, in part or in whole. But wow - it’s different from what he was doing at Bonfire. That menu offered nachos, tacos, steaks. This one involves dishes with six or seven different components sparring for attention, unexpected ingredient combinations (say, scallops, peanuts, pork, and peppadews), and emulsions in every shade of the rainbow, applied in dots, smears, and swirls.

Why take this direction? It’s a fascinating departure, but an awfully unusual one in these conservative, comfort-food times (though half the menu is small plates and nothing exceeds $30, right on trend). Has Bean gone rogue?

Small plates and salads are more conventional than entrees, and by more conventional I mean the likes of grilled baby octopus with avocado, morcilla (Spanish blood sausage), and hearts of palm. This dish is terrible: a measly portion of octopi, served cold and with no grilled flavor, alongside tasteless hearts of palm and slices of sausage. The plate is dotted with green and black goo also lacking flavor. I’m guessing the green goo involves avocado - often ingredients mentioned in a dish’s description arrive altered, in the form of edible finger paint.

An appetizer of bay scallops is one of the stranger dishes I’ve sampled recently. I almost love it, but it also makes me feel like I’m having an acid flashback. The scallops are seared and interspersed with overly crisped chunks of pork and cooked peanuts, rendered waxy and floral rather than round and roasted. The ingredients are spread into a curve and a blob on the plate, like a Cyclops smiley face. There is a smear of coral-colored sauce that must contain the peppadews; it’s citrusy, with a bit of heat. The dish tastes like Chinese food that’s trying too hard.

More straightforward are whole grilled prawns, stacked in a black cocotte with shishito and espelette peppers. This looks striking, but both prawns and peppers lack flavor. More charring and a generous sprinkling of coarse salt would go a long way.

A flatbread isn’t quite as good-looking, but its flavors shine. A thin crust, crisp at the edges, is topped with fig spread, cheese, a prosciutto-esque ham, and arugula. Brussels sprouts, also served in a little cocotte, are excellent; they’re tiny, fried so they’re crispy on the outside, and interspersed with chunks of bacon and light, fluffy bits of cheese.

There’s nothing about this restaurant or its menu that suggests entrees will be anything beyond the standard piece of protein plus sides. So one is unprepared when a lamb dish arrives plated into separate islands, each composed of greens cooked until they’re very soft and dark, a bit of eggplant, a nub of carrot, and a perfectly pink round of meat (unfortunately a bit dry). Then there’s a large orange, carrot-flavored smear in the shape of a carrot, plus some black smears. Sugar cookie crumbs are scattered about the plate.

There’s just too much going on here. The menu will tell you that striped bass comes with bacon, apples, cabbage, and turnips, but it makes no mention of the sour cream-like white substance engulfing these ingredients. The turnips are shredded into fine filaments, fried, and piled atop the fish, no longer tasting anything like turnips. Often Bean doesn’t know when to stop.

Scallops aren’t well seared, and they’re not served hot enough. But they come on top of smoky lentils mixed with shreds of short rib. It’s a fantastic combination, particularly with the sweet, maple-y drizzle on the plate. There are bits of nicely roasted cauliflower on the plate, too, as well as a cauliflower cream with the consistency of a very loose panna cotta. There are good parts to this dish. I’m not sure they all ought to appear at once.

Hanger steak is overcooked; it tastes more like pot roast. Slices of meat sit on quinoa beside oyster mushrooms and a smear of something that looks like mustard but tastes like parsnip - salsify? Then there’s a hollowed-out piece of celery root filled with short rib, evoking a bone and its marrow.

After all the interpretive plating, what will arrive when one orders a burger? Surprise: It looks like a burger. And it’s great, a thick patty full of flavor, on a fluffy bun. It’s topped with cheddar and bacon, and smoked tomato gives it the savor of barbecue. The fries are the burger’s equal, crisp and golden, perfectly salty, and spiked with another surprise: fried garlic cloves. Whimsy works when it tastes good.

Most of the people eating at Pairings appear to be from out of town; the restaurant is busier midweek, and there are quite a few solo diners. On a recent evening, about half the guests appear to be eating this burger. There’s chicken on the menu, too, but I can’t tell you how it is. When I try to order it, they’ve run out. What must this bird-and-burger crowd think of Bean and his compositions? Maybe the restaurant should be called Platings.

Bless Bean for not backing down on dessert, where chefs’ ambitions often fizzle. There is a brownie on the menu, but it’s more like a gooey pudding, deliciously chocolaty and topped with Cocoa Krispies. It comes with a long, brown, rectangular segment that our server tells us is Nutella pudding, though it doesn’t taste like Nutella. Also on the plate: banana ice cream, puffs of cardamom cream topped with dehydrated banana slices, and brandied cherries. It’s a three-ring circus of a dessert.

Then there’s peanut butter and jelly: a cylinder of peanut butter mousse sitting atop a sticky layer of grape jelly that covers the plate, stretching oddly when you try to insert your fork into it. There are white squares that appear to be thin-shaved Wonder bread, as well as peeled, sugared grapes. It’s crazy, and not crazy good, but at least it’s not standard issue.

For all this edible weirdness, drink is fairly plebeian: You’ve got your Frog’s Leaps and your Stag’s Leaps, your Ravenswoods and your Duckhorns. The red wine could double as bathwater; are they storing it under heat lamps? When a waiter notices one guest attempting to chill a pour by holding it to her glass of ice water, he gives an amused “Ohh-kay’’ and walks away. Service here is like that - sort of friendly, but negligent. Servers explain some dishes, not others. Waiters make the same tired jokes they made on previous visits. Why come up with new ones when the place is often nearly empty?

The makeover of Bonfire as Pairings is gutsy and illogical. The food and the room don’t match. Locals don’t want to eat in a hotel restaurant, and hotel guests don’t want their boundaries pushed after a long day of work or sightseeing. Who is this restaurant for? It’s a riddle wrapped in a mystery inside an enigma.