THIS STORY HAS BEEN FORMATTED FOR EASY PRINTING
Dining 0ut

Woodward is a happening place 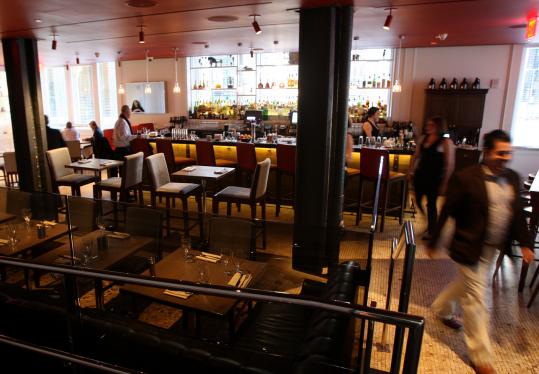 Who hasn’t been spotted at Woodward in the weeks since it opened? Reports encompass the better part of Boston’s restaurant industry: East Coast Grill’s Chris Schlesinger, chef Barbara Lynch, restaurateur/jazz guy Darryl Settles, bartenders from Drink, staff members from Coppa, Sportello, and other establishments around town. Not to mention someone who has plenty of serving experience: Mayor Thomas Menino.

What gives? For one, the restaurant in the downtown Ames hotel is a new project from Boston night life fixture Seth Greenberg, the man behind the Paradise, M-80, Mistral, and more. Now in his 40s, he’s outgrown the club business but not fun. He’s referred to Woodward as a modern-day tavern, somewhere between a restaurant and a club. “Where do adults go for night life?’’ he asked in a July interview. Woodward is his attempt to fill that void.

Too, the chef is Mark Goldberg, a veteran of Mistral. At the bar is William “English Bill’’ Codman, who has shaken it previously at places like L’Espalier and Gaslight. That Boston’s industry insiders turn out to support Boston’s other industry insiders illustrates the community’s camaraderie. It also makes the place feel like a bit of a scene, which must bring joy to Greenberg’s inner club kid, as well as to the Morgans Hotel Group, which runs the Ames. Not every hotel restaurant in town is standing room-only on a weeknight. (All that without even hanging a shingle. The place could really use a sign.)

Woodward is made up of two levels, a downstairs where the bar dominates the tables, and an upstairs where the tables dominate the bar. You can eat high or low, but if you’re after tableside conversation, take the stairs - music and revelry run at high volume on the lower level. The space is all white walls and dark metal columns, marble mosaics and rich leathers. The aesthetic is summed up by the restaurant’s Windsor chairs, classics finished in a glossy white. On the walls are illuminated glass cases that hold gothic, Cornell-esque compositions of driftwood, old tools, antique glass, miniature busts, and other ephemera. The mix of furniture is just as carefully curated.

Care has been put into the menu, too. It’s composed of dishes that are part New England, part Mediterranean, and largely seasonal. They are meant for sharing, as your server is sure to explain in depth. Some do lend themselves to this, others less so. As far as I can see, the main difference between the plates at Woodward and those at most other restaurants in town is that Woodward’s come with serving utensils. Nothing breaks the $30 Rubicon, but several offerings stand right on its banks.

Though it’s not spelled out, the left side of the menu is composed of more appetizer-like dishes, while the right side offers entree-esque fare. An example of the former is toasts spread with butter and topped with thin-sliced English breakfast radishes. This would make a great amuse-bouche, a small bite of good will from the kitchen to get things rolling. But it costs $7. Radishes and butter are a wonderful combination, but that’s quite a markup. (The wine list follows suit, with many bottles going for about three times the retail cost - not that you won’t see a similar pricing structure in other restaurants around town.)

What you do get gratis at the start of your meal is a little plate of pickled vegetables - cauliflower, carrots, and so on. It’s more interesting than the usual bread basket, if less filling - though you may have to ask for them, as we did on one occasion.

Other dishes are a better value. A flatbread topped with duck confit, goat cheese, and dried cranberries is one of the menu’s best offerings, crisp at the edges, the tart and rich flavors playing off one another. A sandwich of house-smoked veal pastrami and mustard on grilled, butter-soaked rye bread is upscale deli decadence. The veal version doesn’t taste markedly different from regular pastrami, though. For more comfort food with a twist, there are savory and satisfying tortellini stuffed with short rib, flavored with Madeira and truffle butter. Mushroom toasts with Taleggio and roasted garlic, a promising combination, somehow manage to be dull and bland.

Not all is heavy or meaty on the menu. Two shrimp preparations stand out. The first features sauteed rock shrimp with olives, garlic, and tomatoes. The dish is simple and satisfying. Likewise a salad of grilled shrimp with green beans, olives, tomatoes, and feta. The shrimp have a wonderful sweet and smoky taste.

Cod sounds clean and lovely, served with preserved lemon, fennel, and olive oil. The fish, however, is slightly past fresh, overcooked, and already starting to skin over when it’s served. It’s truly disappointing. Lobster salad sandwiches are a fair offering, but the shaved fennel topping has more flavor than the lobster. Bouillabaisse is good, but the broth lacks the concentrated, heady shellfish punch of some versions; the bowl contains clams, shrimp, mussels, and more.

Gnocchi are served in a thin tomato broth that also lacks flavor. The dumplings themselves are unusual in consistency, similar to bocconcini, those tiny nuggets of mozzarella. They, too, are very mild. Tender cubes of fall vegetables float alongside them in the broth.

Woodward’s best dishes may be the meaty ones. Grilled hanger steak with fries is a chewy, rare delight made more piquant with mustard butter. And short rib pot roast is tender, deep with flavor, and perfectly wintry served with parsnips and carrots.

Desserts include an apple-cranberry crumble with vanilla ice cream (unremarkable but pleasing) and a wonderfully gooey warm brownie sundae with peanut butter ice cream. You can also drink dessert - hot buttered rum, for instance, or something called Southie coffee. The java is spiked with whiskey and Frangelico, then topped with a generous measure of unsweetened whipped cream, wonderfully austere atop the booze and caffeine.

And the drinks here are just as important as the food. People who come to Woodward may eat something, but they will certainly drink. Cocktails combine ingredients inventively and skew slightly sweet. The Scollay Sling - gin, Earl Grey cordial, honey, egg white, and Angostura bitters - sounds fascinating but mostly tastes like gin. Something is lost in the execution. On the other hand, the Polished Passion - vodka, passion fruit puree, and cinnamon-infused honey - is the sort of fruity drink with an embarrassing name that I rarely order. My mistake. I sip a friend’s, and it is excellent, with pure fruit flavor. The cinnamon honey makes it interesting rather than sweet. A Scarlet Letter also intrigues, pairing smoky mezcal and tequila with tart cranberries.

There’s also a Woodward Ale, a collaboration between the restaurant and Smuttynose Brewing Co. Our server tells us it’s a lot like Allagash White. It’s not, but it is food-friendly and crisp, with notes of cumin and cardamom. On the wine list, you’ll find familiar names such as Sella & Mosca’s 2005 Cannonau Riserva ($46) and the 2008 Cloudy Bay sauvignon blanc ($64). For the label-conscious, there’s a $48 Les Domaniers 2008 from trendy rose maker Domaines Ott - well, from their more-affordable offshoot Ott Selection, made from purchased rather than estate-grown grapes.

But let’s not be picky. The trendy packaging showcases a refreshing product. That sums up Woodward, as well.