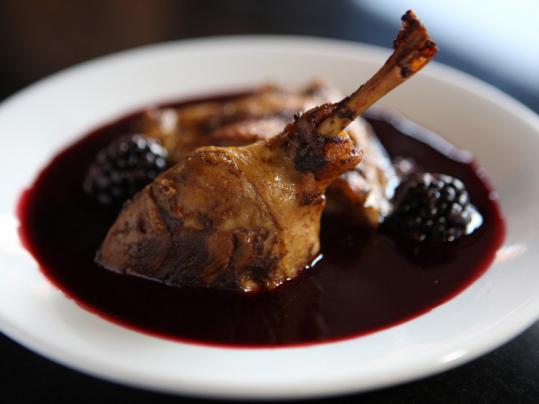 It’s hard to spend time at Conga Bar and Restaurant, the newest tapas place in Harvard Square, and not grow wistful for what might have been. The small dishes on the menu, from ceviche to chorizo, sound charming. The dining room is dimly lit and the long row of windows looks out on cozy Winthrop Street.

And yet this restaurant - the second attempt by owners to fill the space where Caffe Paradiso long lived - is not quite sure what it wants to be. Conga achieves neither the busy funkiness of Cuchi Cuchi nor the intimacy of Taberna de Haro or Dali. Instead, Conga has the air of a sports bar - loud music, large televisions perched above the dining room, and a menu that includes, beyond Spanish small dishes, onion rings and burgers and a range of pizzas.

The restaurant has been altered slightly from its days as Shabu Square, the shabu shabu restaurant that the owners of 9Tastes and Spice Thai Cuisine ran for less than a year before they closed and regrouped. Gone are the neon fish tanks. Now the walls are covered with guitars and posters of Latin music sensations. Conga seems to attract large groups - both times we eat dinner here, tables have been pushed together for assemblies that have the muted air of office parties. One minor complaint: If you sit facing out toward Eliot Street, the headlights of buses driving toward the restaurant sometimes catch in your eyes.

The food is mixed. Complimentary chickpea dip served at the beginning of the meal is quite good, although the bread that accompanies it is chilled. Duck with berry sauce ($9) is excellent, juicy meat and a wonderfully tart dipping sauce. Fried plantains ($5.95) are served with a fig sauce, and it works, too. Jicama salad ($7.50) is light and crunchy, with white shreds of the vegetable, fresh melon, and oranges.

Paella, both regular ($14) and seafood ($17), is delivered to the table in a flat, metal pan, still hot. It looks promising, with red peppers strewn across the top in a pinwheel pattern, but the rice is bland, with no hint of saffron or other spices. The chorizo, both in the paella and served alone as an appetizer ($8), is also disappointing, devoid of any spice or sweetness. It might be mistaken for kielbasa. The shrimp inside the shrimp and bacon brochettes ($8) are large and nicely cooked, but the bacon is thin and overdone.

The owners have found success in their other two Harvard Square restaurant ventures. Here’s hoping they figure out what to do with Conga.