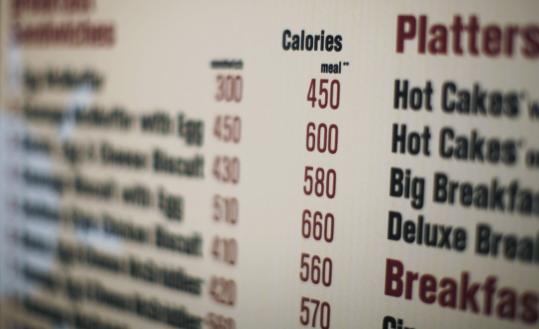 The Food and Drug Administration allows a 20 percent margin of error for calorie counts supplied with restaurant food. Variations in how food is prepared can skew such counts. (Ed Ou/Associated Press/File 2008)
By Michael Hill Associated Press / January 8, 2010

Dieters can’t believe everything they read: The food at many popular chain restaurants and in the freezer section of the supermarket may contain a lot more calories than advertised.

A study of 10 chains, including Wendy’s and , found that the number of calories in 29 meals or other menu items was an average of 18 percent higher than listed.

And frozen supermarket meals from Lean Cuisine, Weight Watchers, Healthy Choice, and South Beach Living had 8 percent more calories than the labels said, according to the study, published in the Journal of the American Dietetic Association.

The researchers are not accusing restaurants and food companies of trying to deceive customers. They said most of the discrepancies can be explained by variations in ingredients, portion sizes, and testing methods. A teenager behind the counter, for example, might have put too much mayonnaise on a sandwich.

Still, “if every time you eat out, you get a couple of hundred calories or more than you think, that can add up really easily,’’ said lead researcher Susan Roberts, a professor of nutrition at Tufts University. “There’s a big drumbeat for people putting calories on menus, but that’s only useful if the calories are right.’’

Marion Nestle, a professor of nutrition at New York University who was not involved in the study, which was done in the Boston area, said she was not surprised by the findings. People might think nutrition labels are precise, but they are mostly ballpark figures, she said.

“It would never occur to me that the calories posted on menu boards are anything close to reality,’’ Nestle said.

The study said most of the packaged food that was tested fell within the 20 percent margin of error allowed by the Food and Drug Administration.

Some items, like Domino’s large thin-crust cheese pizza, came in low. It had one-third fewer than the reported 180 calories per serving.

P.F. Chang’s large Sichuan-style asparagus had more than double the 200 calories it was supposed to have. Ruby Tuesday’s baked potato with butter and sour cream came in on target, but researchers measured 3 percent more calories in McDonald’s McChicken sandwich.

As the nation grapples with staggering obesity rates, local and state officials around the country have considered requiring chain restaurants to post nutrition information about their food. New York City already has such regulations.

Despite the inaccuracies, Nestle said, nutrition information is useful. But she said people need to realize that a bagel listed at 303 calories could contain dozens more, or dozens fewer.