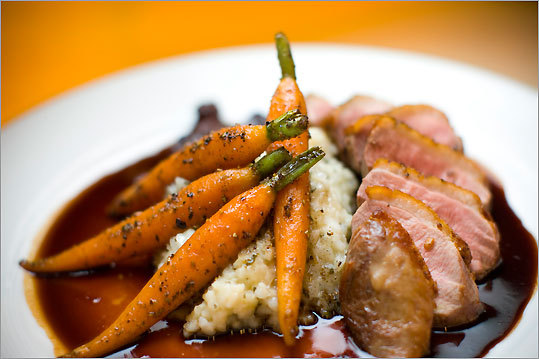 Once business travelers roamed the earth. They were an omnivorous species, and quite thirsty as well. Hotels were their habitat, and they ate and drank in proximity to where they slept. Large packs roved from conference to conference, meeting to meeting, a common sight. No more. These creatures have gone into hiding, scared off by a changing economic climate. One day they may roam the earth again.

Until then, a smart hotel restaurant might contemplate an image shift in the interest of biodiversity. Say, from the cool and aloof-sounding Azure to the more welcoming City Table, with the tagline “a neighborhood eatery.’’ That’s what the Lenox Hotel did in October, a change that makes sense in all ways; the restaurant is now a matching set with the Lenox’s City Bar. City Table is being spun as relaxed and easygoing, with food that’s perfect for sharing. The message is clear: This is so not a hotel restaurant. The Lenox isn’t even mentioned on City Table’s current website.

The makeover is mostly skin deep, if that. The menu structure is similar to Azure’s, featuring some of the same dishes. Chef Dennis Wilson remains. The room looks familiar, still outfitted with a blue wall at the back and light fixtures sporting clusters of amber glass spheres. If that’s all it takes to draw a new audience, this is just exactly as deep as it needs to be.

But unlike peripatetic hotel guests, neighborhood residents don’t go away. They’re a finite resource, not a renewable one. Restaurants have to work a little harder to get them to return. So when it comes to City Table’s food, change could go a little deeper.

There is some satisfying finger food here - roll-your-own steak tacos, for example. The plate offers tortillas, slices of hanger steak, fresh salsa, and guacamole with good avocado and cilantro flavor. It is indeed perfect for sharing, just the right thing to split with a friend over a beer after work.

Fondue always feels like a party, and at City Table it comes in a vintage-looking pot with forks all around. Unfortunately, the sauce is watery, only weakly flavored with cheddar. (The macaroni and cheese available here as a side suffers from the same problem.) For dipping, you get croutons, potatoes, apples, and pork belly. The potatoes are tender, great vehicles for a (more assertive, please) cheese sauce. The apples are beginning to brown but are still crunchy. Bread would be better than the overly crisp croutons, but they’re not bad. The pork belly, unfortunately, is cooked to toughness and not hot. But still, it’s fondue. Always a party.

A burger made from grass-fed beef and topped with Tillamook cheddar is a good neighborhood burger - not one to travel for, but one to enjoy when you’re in the area. Ditto a Cubano - the cheese and pickles get lost in the mix, but this tastes like a very nice ham sandwich. Fries with both sandwiches are too greasy and come strangely clumped together.

Skewers of shrimp have good grilled flavor, and the chimichurri sauce they come with adds a bright note; the plantain chips on the side are greasy, but they work as a vehicle for the green sauce. Chicken drumettes in a dark brown glaze (apparently rum-flavored, though it doesn’t taste very rummy) come with a flavorless, creamy dip (apparently lime-flavored, though it doesn’t taste very limey). They’re unremarkable but decent bar food. Ditto the soggy duck confit spring rolls. Why aren’t these crisp on the outside?

There’s also some satisfying non-finger food. “Really good lobster soup’’ actually lives up to its billing. It’s not mud-thick like some bisques, which is pleasing, but it is creamy - if you froze and churned it, it would make ice cream. It’s tinged with nutmeg and has a good, strong lobster flavor. Oddly, there’s a miniature croissant floating in the middle; I’d trade it for a few more bites of lobster meat in the mix.

An entree of roast duck features tender slices of meat, delicately spiced, and served with cherry sauce and roasted carrots. Herb risotto on the side is a bit gummy, but overall it’s a nice dish.

So are fresh pappardelle served with tender pieces of braised short rib, available in half- or full-size portions. The half is ample, and a nice supper with a glass of red; you’ll find a mix of bottles here, with about half in the pinot-merlot-cabernet family, and the other half less commonly ordered varietals. (The list of white wines follows suit with sauvignon blanc and chardonnay. Cocktails tend to be sweet, unless they’re sour; a sidecar one night tasted mostly like lemon juice.)

A chicken sandwich pretends it’s finger food, but don’t be fooled. It comes with corn bread too thick and unwieldy to actually pick up. It looks like Shinola on a shingle, but it tastes great - fried chicken with sausage gravy and tasty sweet potato fries. You can ignore the bread.

Seared tuna is nicely cooked but blandly flavored - a spicy crust and some salt would help it out. All the taste seems to have gone into the zingy Asian noodles and seaweed salad that come on the side. Overcooked scallops are served in a ring, like a flower, with a pile of hearty grains in the center and grapefruit segments on top. The plate is further decorated with carrots and zucchini carved into little spheres. It looks a little silly, like an amateur’s attempt at fancy plating.

For dessert, a milk chocolate bread pudding with peanut butter sauce tastes prefabricated; apple pear crumble is so floral it tastes like soap. Banana cream pie is better, particularly once it warms to room temperature. The filling tastes just like Chunky Monkey ice cream, with graham cracker crust underneath and meringue on top.

City Table’s service is more consistent than its food: Our server points out the included gratuity for our large party, asks us whether we liked our untouched salad (with abominably sweet maple vinaigrette), and takes it off the bill when we say we did not. (Lots of people dislike that dressing, she tells us. One wonders why they don’t switch it out.) All of these things should happen at every restaurant, but they don’t always.

City Table has the right idea with its makeover. Back Bay is in need of neighborhood restaurants, particularly ones that serve food late. Right now City Table is good enough to lure you into a second visit. That may not be enough to make you a regular.