Post 390 is busy trying to keep up with the crowds 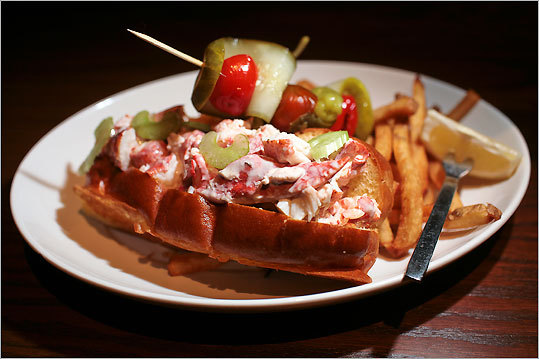 The seafood entrees, including the lobster roll served with fries, stand out at Post 390. (Aram Boghosian for The Boston Globe)
By Devra First Globe Staff / December 2, 2009

Post 390 feels like it’s been here a long time. It’s two levels of wood, fireplaces, open kitchens, and warm lighting, with several bars and an army of employees, and so crowded it’s hard to take any of that in.

But the place opened only in October, part of Himmel Hospitality Group, the people behind Grill 23, Harvest, and the late Excelsior (and partners in the just-opened Excelsior replacement, Bistro du Midi). Post 390 is located at the Clarendon, a luxury condo development (yes, they still build them) on the site of the old Back Bay Post Office Annex. With stairs to climb, different areas in which to interact, and balconies to peek over, it feels like a jungle gym for adults. Who plays here: men in suits, more men in suits, and a coterie of youngish people in their play clothes. The tableau at a communal table one day looks like a stock photo a restaurant might put on its website. Where do all those American-handsome square-jaws come from? And who cuts their wavy, fantastic hair?

They’re here for drinks. But also to eat food that sounds as handsome and American as they are: crab cakes, steamed lobster, turkey pot pie, steak. For dessert, there is (naturally) pie. Outside, there are four seasons. On the menu, it always feels like Thanksgiving or the Fourth of July.

The intention here is to create very good versions of standard dishes, made with high-quality ingredients: an “urban tavern,’’ as Post 390’s creators would have it. Chef Eric Brennan, formerly of Excelsior, Harvest, and the Federalist, seems like a good man to handle this concept. He’s smoking the St. Louis ribs in house. He’s serving his mom’s meatloaf. He’s even brewing the root beer. Everything looks good on paper. On the plate, things are still coming along. This, you suddenly remember, is a brand new restaurant.

Those ribs, with the right amount of tenderness and smoke, come to the table cold. They’re cooked earlier in the day, then reheated on the grill. Not enough. (The bread-and-butter pickles they come with are great, though.) That meatloaf, a rich mix of veal, beef, and pork, is stuffed with ham and fontina cheese. It’s too much and too salty; the meatloaf would be better off with . . . more meatloaf.

Crisped Point Judith calamari come with excellent tartar sauce, but the squid is chewy, the batter greasy and less-than-crisped. Oysters grilled in their shells, with linguica and garlic butter, sound alluring; they are more Rockefeller-esque than their description indicates, the oysters lost beneath the Portuguese sausage and rich topping. Crab and spinach dip buries lovely fresh crab in goo. Suddenly it’s the ’70s at your table, and this spread with its sliced up baguette is the hit of the cocktail party.

A surprising number of the starters involve seafood: five out of seven, plus five raw bar selections. One that doesn’t is another throwback party snack: tasty and straightforward deviled eggs. They come with chilled, unfortunately slimy asparagus. Peking duck potstickers are very good, juicy little dumplings served with a blackberry hoisin sauce.

Though the seafood appetizers don’t stand out, the seafood entrees do. A lobster roll features plenty of sweet, fresh meat on a buttered, griddled roll. The kitchen knows better than to mess around with that perfect, simple formula. Fish and chips pairs nicely battered haddock with crisp fries and coleslaw. And crab cakes are some of the best I’ve had in a long while: mostly crab meat, little filler, and very light.

Post 390 will make you a very good burger, cooked right and topped with cheddar. But grilled skirt steak is greasy on the outside, slicked with oil. Roast lemon garlic chicken is painfully dry. Beer and bacon macaroni and cheese, which sounds fail-proof, is overpowered by the beer flavor. The good eater who orders it looks up woefully from his plate. “Have you ever seen me not finish something before?’’ he asks. In fact, no.

For dessert, pies come in an array of seasonal flavors; right now that means apple, pecan, and the like. There’s also a fluffy banana cream pie topped with drifts of whipped cream. Crust isn’t as flaky as your grandmother’s, but pie is still pie, always welcome. Carrot cake, on the other hand, is an ambitious creation with citrus cream cheese frosting and burnt orange caramel, but the towering slice is cold, dry, and dense. It is nice to be able to get a full slice of chocolate cake or a generous sliver; for $3, the latter is a perfect option for those who just want a few bites of something sweet.

Wine director Brahm Callahan has created a strong, interesting list that ranges over many pages, regions, and price points. A serious Bordeaux lover can contemplate a $345 Chateau Leoville-Poyferre from 1982, but J.M. Cellars’ 2005 Bramble Bump, a $58 Bordeaux blend from Washington, would taste mighty nice with that burger. There’s also a larger-than-usual selection of half-bottles. The beer selection keeps pace with the wine, but the cocktail program has some catch-up to play. The Dirty Water one night tastes predominantly like sherry, though it apparently also contains gin, orange bitters, lemon juice, and simple syrup. A Green Line (Bols Genever, sweet vermouth, green Chartreuse, and orange bitters) mixed early in one meal tastes completely different from one ordered later. The list is well conceived but needs to be executed with consistency and balance.

Post 390’s service is polite and extremely attentive. The night the ribs arrive cold, we inform our waiter. Before we know it, a guy dressed like a Secret Service agent is at our table, a grave expression on his face, asking question after question about what went wrong. He comps the ribs. Occasionally, servers can be a bit clueless. One evening, each time we order an item, our waitress reiterates, for no apparent reason, “The portions here are really big.’’ By the fourth time, it’s hard not to laugh. Another night, when asked where Point Judith is, a waiter begins theorizing, talking over a customer who is saying “Rhode Island. Rhode Island. Rhode Island.’’

To its credit, the team behind Post 390 knows the food is not yet up to par. Several days before this review was scheduled to run, the restaurant’s publicist called to say as much. The crowds have been greater than they anticipated, she said. It’s hard to refine things when the kitchen is struggling to keep up.

Still, crowds were the goal. A month before the restaurant opened, I spoke with Kenneth Himmel, founder of the restaurant group. “It will be very high energy, very high volume,’’ he said. By that measure, Post 390 succeeded as soon as it opened. Now the restaurant needs to work on tasting as good as it looks.