Novel approach to a bakery central to Portsmouth, N.H. 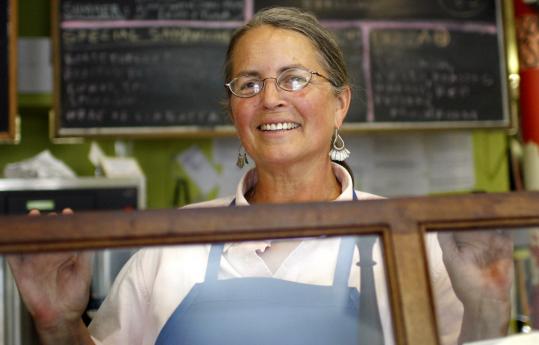 Lyn Voss recalls working with Sherrie Flick at Ceres years before she wrote about the bakery. (Photos By Cheryl Senter for The Boston Globe
)
By Clara Silverstein Globe Correspondent / October 14, 2009

PORTSMOUTH, N.H. - In the 29 years since Penelope Brewster gave up being a metalsmith to open Ceres Bakery, she has fed an entire generation of townspeople her signature whole wheat baguettes, rhubarb-raspberry tarts, and enough coffee to fill Lake Winnipesaukee. Regulars wait outside for the doors to open each morning, and “lounge dwellers’’ come in each day for lunch. Local artists display their work on the orange-red walls of the dining room.

Now Ceres has one more attraction for its customers: It’s the setting of a novel, “Reconsidering Happiness’’ by Sherrie Flick, published last month. “Who wouldn’t want to be a part of someone’s imagination?’’ says Brewster, the thrilled baker. The author worked at Ceres (SEE-rees, after the goddess of agriculture in Roman mythology - and the street of its first location in town) from 1987 to 1990, around the time she earned her bachelor’s degree in English literature from the University of New Hampshire. Flick now lives in Pittsburgh, where she writes and is artistic director of the Gist Street Reading Series.

“Sherrie was known as the smart one on the staff,’’ says Lyn Voss, the head baker, who began working at Ceres just a few months after it opened. “We always knew she was going to be a writer, but we didn’t realize she would end up writing about us.’’

Flick doesn’t literally tell stories about her former co-workers. She renames the bakery Penhallow (its street address) and invents Vivette and Margaret, characters who work there, and later reconnect in Nebraska (where Flick earned her master’s at the University of Nebraska, and whose press published the book). Though the novel’s theme is travel and self-discovery, the rhythm of daily life in the bakery, described as “at the center of the town’s pulse,’’ plays a strong supporting role.

Voss says these descriptions apply to the bakery today, even though Flick set the story in the early ’90s. “What I read is really so right on. We still make a lot of those things.’’

As Voss walks through the bakery’s main area into a second dining room, she waves to her daughter and baby granddaughter, who are having an afternoon snack at one of the tile-topped tables. The menu of soups and sandwiches is posted on a chalkboard; customers can also choose from a colorful display of raspberry squares, frosted pumpkin cake, heart-shaped cocoa cookies, and cardamom coffee cake. Chunky cookies, in different combinations of butter, nuts, chocolate, and oats, are a substantial 4 inches wide and quite thick. People greet each other or banter with the servers at the counter. The relaxed, friendly vibe makes the bakery feel like the town’s living room.

Flick re-creates this atmosphere in “Reconsidering Happiness,’’ as Margaret and Vivette negotiate a complex web of relationships between customers, townspeople, and others who work in the bakery. “I always loved the amazing collaborative community of strong and interesting and talented women at Ceres. I wanted to try and capture that spirit, but nothing ever worked right until I connected Vivette and Margaret via the bakery,’’ says Flick, who has also published “I Call This Flirting,’’ a collection of flash fiction (pieces of extreme brevity).

Flick still enjoys baking for the Gist Street group and for friends. Her novel in progress doesn’t revolve around food - yet. “For now the various characters in that book work in a design firm, a TV news station, and a fine arts museum. But there’s lots of potential for food and cocktail scenes,’’ she says.

Meanwhile, Ceres continues to evolve, tweaking the menu and welcoming a new generation of customers.

As Voss says, “When we started out, we were a granola, hippie place. Now, a lot of young people work here. They don’t let us listen to Neil Young all the time.’’