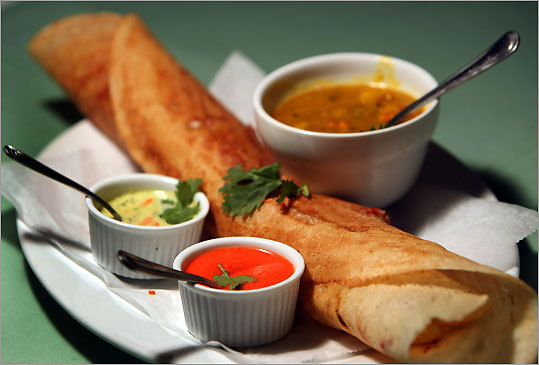 For a long time, the best place to eat in Sharon was Coriander Bistro, an upscale French restaurant that closed earlier this year. In July, a new restaurant opened in the space, and surprise! It’s called Coriander Bistro. The name suits this incarnation even better than it did the original: The restaurant now serves Indian and Nepali food. (It’s owned by the same people who run Himalayan Bistro in West Roxbury.) As much as the food has changed, this is still the best place to eat in Sharon. In fact, it’s one of the best places to eat Indian food in the Boston area.

The menu ranges far and wide, from north to south to west to the native Nepal of the owners, from street snacks to Anglo-inflected specialties, homey dal to complex curries. There are nearly 100 main dishes to sample, and almost 20 kinds of bread alone. The variety at Coriander is not the only reason you could eat here often. Chef Dammar Thapa went to culinary school in India, and his resume includes stints at a five-star hotel in Nepal’s capital, Katmandu, and on cruise ships. His food is deftly spiced and prepared with an unusually fine touch.

This means extra-delicious versions of takeout classics. Chicken tikka masala features moist chunks of chicken breast tinged with smoke from the tandoor and a rich, creamy tomato sauce, subtler than usual, the spices breaking over your tongue in waves. Saag paneer is a mixture of spinach and feather-light cheese bright with fresh ginger. Requested medium, both feature a pleasant overlay of heat. Chicken tandoori is served on a dramatically sizzling platter, juicy and tender. Shrimp vindaloo is oddly unfiery, and not as tart with tamarind as some versions are; it’s less complex than some of Coriander’s other offerings but still tasty.

A dosa filled with potatoes and chutney is as big as a log; the outside crepe is crisp and chewy, a texture similar to cheese that has leaked out the side of a grilled cheese sandwich and cooked on the pan. Goa shrimp curry offers a fragrant medley of spices, heavy on the turmeric without being acrid. Chicken takatak is rich comfort food, poultry bathed in a sauce of mint, coconut, and cashews.

Dishes come with a platter of basmati rice so fluffy and fragrant it prompts one diner to lift it admiringly and say, “If only I could get my rice to turn out like that.’’ If you come to Coriander for a standard US Indian restaurant experience, you’ll get that, a notch better than you might be used to. (Though the lovely spiced-potato filling of a vegetarian samosa is obscured by the scowling embrace of its thick and uninspired fried wrapping.)

But many of the menu’s joys are less standard, particularly the Nepali specialties. Coriander’s sister restaurant, Himalayan Bistro, features more of these dishes. At Coriander, the focus is on Indian food; the owners plan to eventually expand the Nepali section of the menu. Right now, you can still get momo, the dumplings served all over Nepal. They embody some of the differences between Nepali and Indian cooking: They are lighter than samosas, steamed rather than fried. Indian in flavor, they are prepared in a style more reflective of China, Nepal’s other neighbor; momo resemble that country’s jiaozi. (I’ve never seen jiaozi or momo plated quite like this before, though: The dumplings are arrayed on a plate with strands of pasta stuck in them, a noodle tepee held together at the top with a maraschino cherry half. It’s both festive and silly.) The chicken version is particularly good, juicy and full of ginger, the meat encased in slightly chewy skins.

Aloo bodi tama is a surprising, delicious mixture of potatoes, black-eyed peas, and bamboo shoots: You got your Hoppin’ John in my Chinese food and my Indian food. Jhaneko dal, a lentil dish, is flavored with jimbu, a distinctly Nepali chive-like seasoning. And kukuhura ko masu ra saag is a lighter version of its Indian chicken-and-spinach counterpart, fresh, bright greens and white meat in a sauce of onions and tomatoes. Haas ra saag, a similar dish made with duck, features tough meat but is delicious all the same, the duck juices enriching the sauce.

Dessert veers back into standard territory, with a good and soupy version of the rice pudding kheer, flavored with cardamom and nuts. Gulab jamun, balls of pastry soaking in a pool of syrup, is like an Indian version of fried dough - but sweeter, if you can believe it. Lassi comes in sweet, salty, and mango varieties, but also in pistachio and a delicious Himalayan version sweetened with honey and flavored with cardamom. These are icier, frothier drinks than the creamy lassi we’re accustomed to. You can also get beer, including a range of Indian brews; wine; or even a margarita, if you must. Coriander has a full liquor license, and it’s not afraid to apply it to a range of fruity, cuisine-inappropriate cocktails.

The restaurant looks much as it did when it was the former Coriander Bistro, a romantically lit, wood-paneled room, just now adorned with a panoply of Hindu statues. Coriander is a family business, and some of the people waiting tables are better suited to the job than others. One evening you might be helped by a prompt server eager to make recommendations: “You need a vegetable!’’ Another, it could take you 15 minutes to get the attention of someone folding napkins with her back to you. On one visit, the paper absorbing the grease under our nan met the candle on the table; we put the small conflagration out with our hands. When you set your table on fire and nobody notices, it’s safe to say the staff could be more attentive.

But the food is what really matters here, and here the food is very good: soul-suffusing, spice-intoxicated, dreamy stuff on the kitchen’s best nights. Diwali, the Hindu festival of lights, takes place this week. Coriander Bistro would be the perfect place to celebrate.