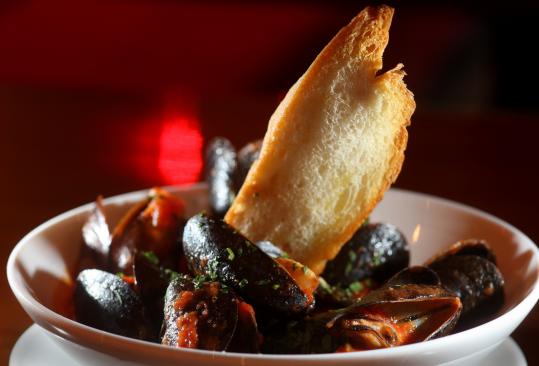 It was a sad day when Bob’s Southern Bistro shut down two years ago: the end of a long run, the end of “glorifried’’ chicken, the end of listening to live jazz while eating soul food. Bob’s (perhaps better known by a former name, Bob the Chef’s) meant something. In the South End, on the Roxbury side of Mass. Ave., and in the heart of Northeastern nesting grounds, it was a place where people from all walks of life came together. It felt real. When a new owner appeared on the scene wanting to turn it into an upscale lounge for young professionals called Night Town, it seemed an era had ended.

Night Town was not to be. Instead, the space became upscale French bistro Circle, and within two months it was out of business. The location that Bob’s made a nexus now seemed a liability: on the border of everything, and without a concept strong enough or well-priced enough to draw people to the outskirts of its orbit.

Now the Stork Club is trying to bring the corner of Columbus and Northampton back to life. Opened in August, in the hands of new co-owner Ziad Chamoun (Barking Crab) and chef Jeff Poliseno (Vox Populi), it grafts its two predecessors into one nightspot. It’s kitted out with the plush carmine banquettes and groovy space-age bar installed for Circle. It features the live music that was a focal point for Bob’s, with jazz and blues every night. And it feeds its patrons ribs, catfish sliders, and fried chicken, but also arugula salads with roasted figs, soba noodles, and seared tuna.

With performers ranging from Berklee students to seasoned combos, the Stork Club has got the jazz part down. The soul, however, could use some work. A gumbo special with andouille sausage and crawfish one night features a base of gummy rice, but the flavor is spot on: spicy and rich. Ribs are tough and need a more lavish slather of barbecue sauce. Blackened catfish sliders could use more spice. Without much of a sear on the fish, the sliders lack textural interest; frying might work better here - though the fried chicken plate is more horrifried than glorifried. It seems sacrilegious, in the space that was Bob’s, to serve chicken so dry it could choke you, its crust neither crispy nor greasy. It comes with greens that are nice and tender. Even if it were great fried chicken, the plate is $16 and offers just one small piece: cheap cheep.

The kitchen has more success with other selections from comfort food’s greatest hits. Macaroni and cheese is served in a pot, and not a small one. The generous serving of pasta is pleasingly creamy, laden with bites of ham and bitter broccoli rabe. The Stork Club’s burger is the thing I’d be most likely to order if I came here again, a hand-formed Angus patty topped with tangy aged cheddar and a pile of onion strings. Because you need fries with your onion rings, there’s a pile on the side, skins on and nicely fried. It’s good late-night fare, and the Stork Club kitchen is open till 1 a.m.

Mussels fra diavolo are also worthy, plump, tender, briny shellfish in a spicy tomato broth. The dish comes with one mingy piece of garlic toast, not nearly enough, particularly given how sop-worthy the liquid is. We ask for more, and we see other tables doing so, too.

A well-composed arugula salad is dressed in just the right amount of tart white balsamic vinaigrette, the sharp greens complemented by semi-caramelized walnuts, roasted figs, and shaved Parmesan. Steak frites is a nicely cooked skirt steak with great flavor, topped with, according to the menu, Dijon tarragon sauce. It tastes like neither Dijon nor tarragon; there’s an odd, sweetish flavor to it. We scrape it off and are happy. Plus, there are more of those good fries on the side.

They also come with a Cubano, and the fries are the clear highlight of the plate. The roasted pork in the pressed sandwich has little flavor; ditto the Swiss, the pickles, and the theoretically spicy pepper sauce. Who knew a Cuban sandwich could be so unsatisfying?

Rock shrimp and ginger spring rolls are, too. You can’t taste the ginger - or the rock shrimp, really - and the skins are thick and bland. In fact, they’re so tasteless we dip them in the mussels’ broth while we wait for more bread. It’s an improvement. Sweet potato crab cakes could either be sheer genius or simply weird, and turn out to be the latter. Sweet potato is too strong a flavor to pair with delicate crab.

The thing I’d be least likely to order again is the soba. These noodles may win the least attractive plating award for the month: a brown lump in the center of a plate. If they were bursting with wonderful flavors, they’d be gone too quickly for us to dwell on their appearance. But they’re coated in a sweet, bland peanut sauce, with the Thai chilies and lime promised by the menu nowhere to be found. Al dente’s gone AWOL; you don’t even need teeth to eat the mushy strands.

Ah, well, what’s a dish like soba doing at a place like the Stork Club, anyway? Stick with the basics and you’ll be fine. Like the chocolate mousse for dessert, presented innovatively in a little glass cone that sits on a cube of ice, but otherwise straightforward: whipped to a fluffy texture and wonderfully chocolaty. Our waiter offers a spiel about how tiramisu here is made with sponge cake rather than ladyfingers to better soak up the rum, but when the dessert comes it’s with a sober amount of alcohol. It’s a lovely little wedge of cake and cream, though, with a crunchy dusting of cocoa on top.

And when it comes to food, the basics are really all the Stork Club needs; on one visit, we’re the only ones eating. When it comes to drink, a little more effort is called for from a place named after a legendary nightspot opened by a bootlegger in the middle of Prohibition. There ought to be a list of retro signature cocktails and classic drinks, but there’s no cocktail list at all. (One is in the works, and there are signature drinks such as a whiskey smash and a Stork martini, though no one mentioned them to us.) The bartending should be stronger: a sidecar and a Tom Collins are both watery, unbalanced, poorly proportioned concoctions. Red wine is served far too warm; the Jim Jim “Barkers White,’’ a verdelho-viognier blend, is on the simple side but at least refreshingly chilled.

Also refreshing: crowds of people over 30 present late on a weeknight, just hanging out. There are friends of the band here, too, standing close and listening with drinks in their hands. Pretty young things lounge on the banquette, and an older black couple arrives for dinner. It approaches a Bob’s-like feeling. On a weekend, it’s not quite as welcoming; an employee with a clicker stands out front, preventing several parties from entering. After a while, he lets them in, though it appears no one has left. What’s that about?

Never mind. Inside, the band is playing. You come to the Stork Club for the music, and you stay for the music. And if you eat while you’re here, that’s fine, too.