David Ortiz turned it around at the plate, but his Big Papi’s Grille strikes out 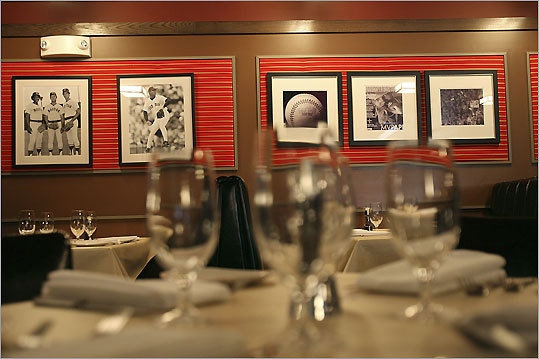 David Ortiz has had a rough year. There was the home run drought. There was the steroids scandal. And there is Big Papi’s Grille, a Framingham restaurant named for Ortiz in which he is a financial partner. It’s not so much that the place is terrible, although it’s not very good. It’s that Ortiz - even an embattled Ortiz - deserves to have his name on a restaurant with style and personality. Big Papi the slugger is a beaming, charismatic individual on and off the field. Big Papi the restaurant is generic - a midrange steakhouse in Applebee’s style architecture, a bead in a chain of similar establishments on Route 9. With a few tweaks, it could just as easily be Lenny Clarke’s Grille or Joey McIntyre’s Grille.

Big Papi’s opened in late July, a collaboration between Ortiz and Classic Restaurant Concepts, which previously operated the restaurant as Metro 9 Steak House, and before that as Desmond O’Malley’s. The restaurant group also runs the Kinsale in Government Center and the Asgard in Cambridge, two establishments with strong identities: They are Irish pubs. Big Papi’s lacks the same clarity.

This is not a sports bar or baseball shrine. There are TVs to watch the game, but - and I never thought I would say this - not enough of them. There are framed photographs of Ortiz, but not enough cool paraphernalia. Where are the bats? The jerseys? The fun?

Nor is it particularly Dominican, despite peripheral touches like empanadas and something called “Dominican rice.’’ Ortiz certainly isn’t required to be a culinary ambassador for his homeland, but for a guy who reportedly loves to cook and is enthusiastic about food, this menu lacks zest. (Aside from the frequent appearance of Big Papi En Fuego, Ortiz’s hot sauce. Yes, vitaminwater is available, too.)

What it is is Metro 9 Steak House with Ortiz’s name on it. The restaurant’s old website, redirecting viewers to Big Papi’s new one, announces: “Join us for a unique dining experience and the exceptional food and service you’ve come to expect from Metro 9.’’ The same chef, Scott Olsen, remains in place. With Ken’s Steak House and Legal Sea Foods within pitching distance, it may take more than a name change to make Big Papi’s Grille a success.

Better food would be a start. Sirloin empanadas are like no empanadas I have had before - sort of like Big Papi’s version of function-room hors d’oeuvres, a bit of meat enclosed in fluffy, phyllo-esque dough. An avocado sauce doesn’t add much flavor, but you can make up for this by applying the accompanying En Fuego sauce. It comes in strengths from 1 to 4. On one visit, our server tells us 1 is the mildest and 4 the spiciest; on another, someone tells us the exact opposite. We ask to sam ple all of them, and all pack a punch; the green sauce, with tomatillos and jalapenos, is particularly good. It would seem reasonable to keep bottles of all four on every table, but the sauces are served in little ramekins. This removes the risk that bottles will be pocketed by guests, but it’s a missed opportunity to showcase the Big Papi connection.

Shrimp ceviche seems more like shrimp cocktail. The shrimp have no discernible citrus flavor. They’re accompanied by a salsa of seemingly canned mandarin orange slices and very unripe pineapple chunks. An appetizer of calamari isn’t bad; the squid is crispy on the outside and tender, drizzled with an orange sauce that the menu says is cherry pepper aioli. Its flavor is mild, but you can make up for this by applying the accompanying En Fuego sauce.

Baja chicken egg rolls, skins filled with chicken and black beans, seem like something you might find in the freezer aisle of the supermarket; they’re not as greasy as they might be, nor as flavorful. Apparently poblano peppers, cilantro, and cheese are also in the mix, but those ingredients are hard to make out. You can make up for this by, yes, applying the accompanying En Fuego sauce.

Beef and chicken skewers are blah in flavor and very dry. They come with a pleasantly fruity Caribbean coleslaw that could go well with something, but these go well with nothing. The ever unwreckable iceberg wedge salad here succeeds with plenty of blue cheese dressing and crumbled bacon.

Burgers are a major focus of the menu, the perfect opportunity to feature the chimichurri, a Dominican burger unrelated to the Argentine condiment of the same name. There’s one on the menu, incorporating garlic, onion, red pepper, cilantro, soy sauce, and Worcestershire sauce, and it’s a pretty good burger, if not zesty as you might expect from the ingredients. There’s no explanation of the dish on the menu, a la “a popular street food in Big Papi’s native Dominican Republic,’’ another missed opportunity to showcase the star. (Yes, it comes with En Fuego sauce.)

The fries that accompany the burgers are either quite good or terrible, depending on whether the oil is the right temperature. One night they come practically coated in grease; another they are much improved.

There’s also something called the Big Papi burger. Ours comes overcooked on a bun that could be from a Stop & Shop bin. It’s topped with two measly chunks of avocado, a little cheese, and a smidgen of pico de gallo. It’s pretty sad - even the pickle is limp. If anything at Big Papi’s Grille should be great, it’s the namesake burger.

Steak, however, is the restaurant’s strong suit, charred on the outside and pink inside. You have your choice of complimentary bearnaise, peppercorn, or red wine sauce and two sides: baked potato, truffle fries, broccoli, and so on. For an extra charge, there are add-ons such as a lobster tail or blue cheese.

One such option is to get your steak Oscar style, with a crab cake, asparagus, and bearnaise, which the menu says is “Papi’s rendition.’’ The crab cake lacks flavor, but sirloin club and New York strip steaks from Brandt are satisfying.

Our foray into fish and chicken is not. Mahi mahi is overcooked and served with the aforementioned Dominican rice, which turns out to be water-logged grains studded with bland black beans and corn kernels, unripe chunks of pineapple and mango, and pieces of asparagus stalks. A roasted half-chicken has good flavor but is chewy enough to stick on your bedpost overnight; the skin is rubbery, without a hint of crispness. Confirming that beef is the way to go here is a dish of hearty Kobe meatloaf, spiced with a faint whiff of cumin, topped with mushrooms, and served with mashed potatoes.

For dessert, there’s the welcome option of getting a small or large portion. An ice cream eclair has the texture of a grocery store baguette filled with vanilla ice cream; all the chocolate sauce in the world couldn’t redeem it. Banana coconut flan tastes like the Girl Scout cookie formerly known as Samoa and is more cake than custard; it comes with caramelized banana slices. The best dessert is a brownie sundae, fudgy and moist cake with vanilla ice cream and chocolate sauce.

To drink, you’ll find beer and fruity drinks, as well as a middle-of-the-road wine list. A separate “wine sale’’ list offers slightly more interesting selections such as a 2004 Santi amarone or a 2006 Eroica riesling.

The staff is genial and attentive, though not all seem quite up to speed with the menu. Maybe they haven’t had the chance to familiarize themselves with all the dishes. On a recent night featuring two games, the bar area at Big Papi’s Grille is nearly deserted. We see people outside look at the menu, then head next door to Legal Sea Foods.

In a crazy Red Sox town, you’d expect people to become regulars at a place bearing Ortiz’s nickname. Recent troubles aside, we love the guy. (Papi, this pains me.) With a stronger baseball theme, sports fans might flock. With a more rollicking atmosphere, anyone might - replace the standard pop with merengue, put a less traditional steakhouse menu in place, and get rid of the dark, formal steakhouse hues. Big Papi’s Grille isn’t the kind of place you’d imagine Big Papi would open. He’s worthy of more pizzazz. If Tom Brady were to put his name on a restaurant, you can bet it wouldn’t have vinyl tablecloths.

Photos of the restaurant and menu items, such as the brownie sundae (above).