Working on a new act 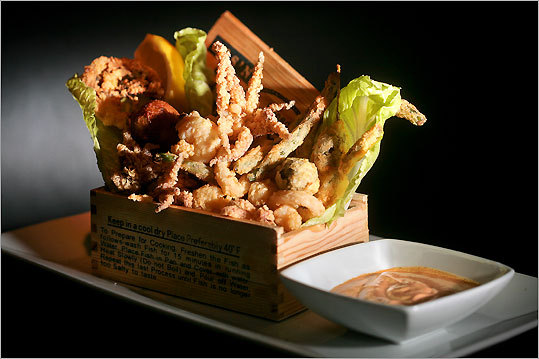 Newbury Street is a tricky place to open a restaurant. The clientele has a split personality. There are the neighborhood residents, and there are the people who come from elsewhere to shop and frolic. Their needs are different. The locals need good food that keeps them coming back for more, which is not necessarily the kind of food that attracts visitors looking for a quick bite, a stylish perch, a candy-sweet flirtini, or some combination thereof. Add a recession to the mix - the visitors are sparser and everyone is thriftier - and things just get trickier.

Into this environment comes Pazzo, an Italian restaurant led by chef Bill Bradley, formerly of Bricco, Carmen, Rustic Kitchen, and Incontro in Franklin. Pazzo opened in May in the space formerly occupied by Croma.

Bradley is an adept chef, yet the place feels as though it is still trying to get its footing, to figure out where it falls on the continuum between style (see: Cafeteria) and substance (see: La Voile). Indeed, by phone Bradley says they are still figuring out the Newbury Street balancing act.

Pazzo’s reasonably priced menu offers bar snacks, pizza, salads; bites light and heavy; the usual (veal parm), the less usual (chicken livers), and the in-between (wild boar Bolognese). It’s as wide-ranging as the restaurant itself, which starts with an outdoor patio, segues into a long room divided into corridorlike spaces, and ends with another big room downstairs. With so many seats it seems impossible to fill, and it’s often impossibly noisy, voices ricocheting off the brick walls. On a nice night, eating inside can feel a little lonely, even with the company of the lively waiters. It’s Newbury Street. Everyone is out on the patio.

When it comes to eating, substance always wins. Some of the restaurant’s best offerings are its least stylish, at least where looks are concerned. An antipasto of chicken livers is brown and lumpy, but these are some of the best chicken livers around, glazed in balsamic vinegar and served with polenta. The offal flavor of the gravy pairs perfectly with the creamy polenta, a magic trick: poor folks’ food alchemized into something luxurious. A friend who loves liver was so excited about trying the dish he dreamed about it the night before. It was even better in real life, he said.

Rock shrimp are sauteed and served in white bean puree: more lumps, this time in white goo instead of brown. But the small shrimp, named for their hard shells (removed) and known for their somewhat lobsterlike flavor, are fresh, sweet, and tender. The bean puree is very similar to that served at the beginning of the meal with bread, a voluptuous substance that is more sauce than spread. There’s a bit of heat from chili oil (thought it’s hardly “fiery,’’ as the menu states) and a lift from lemon: lovely. The appetizer is served in a white covered dish that’s opened at the table.

A baked shrimp casserole is similarly presented, but where the former dish is primarily a showcase for the seafood, the shrimp are the least of it here. They’re overcooked and somewhat tough; the rest of the dish, a composition of orzo, tomato, feta, and spinach, makes up for it with bold flavors.

A first course of fritto misto is both excellent and nice to look at. Greaseless fried rock shrimp, calamari, and salt cod are served in the little wooden box that salt cod comes packaged in. Also in the mix are battered and fried green beans and caper berries, a delicious touch of whimsy. Grilled artichokes with lemon, mint, and feta are simple and light, perfect patio food. Tagliolini is, too, a clean combination of fresh pasta, tomatoes, parsley, and plenty of Wellfleet clams in a briny, garlicky white wine sauce. This is the kind of dish that depends on quality of ingredients and attention. The former is present both times we try the dish. The latter is more variable. On one evening, the flavors are balanced; on another, the harmony falters. A lobster minestrone with seafood meatballs and pesto is bland and in need of salt, though studded with nice chunks of lobster.

There are several takes on pizza. A simple margherita is topped with San Marzano tomatoes and house-made mozzarella; other options include one with sausage, ricotta, and roasted peppers, and another with roasted garlic, Cambozola cheese, and olive relish. Carpaccio also comes in multiple forms: tuna, portobello, beef, and octopus. We try the last. It’s really potato carpaccio, the tubers sliced thin and topped with baby octopi with olives, smoked paprika, and caper berries.

Braciola is a meat-loaf rollup with pine nuts, raisins, and sweet-and-sour tomato sauce. The meat has the texture of a rustic pate; the sugar, vinegar, raisins, and nuts pique the taste buds’ interest.

Ricotta gnudi are light cheese dumplings shaped like scallops and served with mushrooms and tender shreds of duck meat. There are actual scallops on the menu, too, sweet and expertly seared, served with asparagus risotto, a “three pea salute’’ (peas, pods, and tendrils), and tangerines. The major flaw: The well-prepared risotto tastes nothing like asparagus.

Veal parm, chicken parm, and eggplant parm are all available here. The veal is topped with tomato sauce and homemade mozzarella and served with linguini. The pasta is plain, the veal lacking flavor. These dishes should be big, simple, and satisfying, as they can be mainstays for regular diners as well as those who simply happen in.

Ditto something like the “local farmers salad’’: spinach, beets, white beans, olives, aged ricotta, red onion, and lemon-mint vinaigrette. Half those things will never show up in my CSA share. But the real problem here is that the salad is boring, with barely any dressing and little visual oomph. Salads and parms need to be made wholeheartedly if they’re going to be offered. I’ll bet Pazzo sells a lot more of them than its stellar chicken livers.

For dessert you’ll find a fairly standard lineup: warm chocolate cake, creme brulee, tiramisu, and gelato, with a pear tart to mix it up. They’re fine. Eat. Enjoy. But I do wish restaurants would start thinking a little harder about what to do with the sweet side of the menu. It confounds me that a kitchen imaginative enough to offer, say, spice-crusted tuna carpaccio glazed in grape-must vinegar with currants and mint doesn’t take that imagination one step further: Spiced farm-stand peaches or plums glazed in grape-must vinegar, grilled, and served with gelato, currants, and mint sounds pretty good to me.

The wine list mixes things up more, with grapes like falanghina, cortese, and negroamaro alongside chardonnays and pinot noirs. Bottles are mostly Italian, with some American offerings. Few are priced beyond the $40-something range. Value-driven wine lists seem to be even more in fashion than value-driven menus these days; it’s good for the wallet, but one feels sad for the wine geek.

“Pazzo’’ means “crazy’’ in Italian, and the name leads you to expect a less serious restaurant than the one you find. Pazzo isn’t perfect. It is, however, one of the best places to eat on Newbury Street. With Bradley in the kitchen, it stands a chance at finding balance.

Noise level Very loud when the dining room is full.