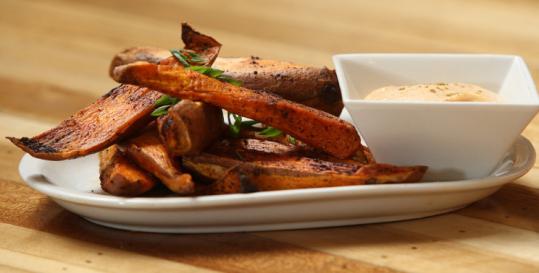 If I lived in Fort Point Channel, you’d probably find me at Channel Cafe several times a week. Actually, I’d probably take my laptop and move in. I last reviewed it in 1996, when it was Cafe Three Hundred and the only thing I minded about the place was the fact that it wasn’t open for dinner. Local artist Ana Crowley now owns the cafe, which is one flight down in a 19th-century art-filled warehouse. A year ago, Channel opened for dinner at the end of the week.

If you’ve been to the highly stylized Persephone, practically across the street, that’s not Channel Cafe. In fact, think 180. This is practical, pared-down fare, nothing fancy, all very well done in a hip, two-story, artsy space.

Everything was relatively quiet until four months ago, when Brian Van Etten took over the kitchen. The restaurant serves as a Community Supported Agriculture drop-off spot, and Van Etten gets to participate. Just as any family would look over the contents of the CSA box each week and decide what’s for dinner, so does the chef. “Today I have zucchini, some amazing basil, a ton of pickling cucumbers,’’ he told me last week. When I slipped into the restaurant that night, the zucchini had been turned into crisp, feathery fritters sitting on a julienne of jicama with a little tartar-like sauce.

Van Etten’s specials board is the place where he’s featuring the harvest. Smoked herring toasts ($4.95), an unusual and delicious nibble, was on offer one night, as was a beautiful fillet of striped bass ($17.95), nestled on scallion mashed potatoes, surrounded by a tangy caper beurre blanc.

On the regular menu, delectable fish tacos ($9.95) came in soft flour tortillas with ripe avocado and hot peppers. “Tofu mojo’’ ($14.95) was a grilled tofu steak with a zesty, oniony tomato sauce. Steak salad on romaine lettuce ($15.95) boasted large morsels of chewy skirt steak, with roasted tomatoes, chickpeas, and gorgonzola. Pulled pork with crisp jicama slaw ($10.95), on a plump, yeasty, homemade bun, which got delightfully soaked with pork juices, was perfect, and a generous and juicy ground sirloin burger, the “channel,’’ on the same wonderful bun, was smoky with thick bacon strips. Fat sweet potato fries with aioli (below) were divine.

Van Etten, who works in a small kitchen with one other person, is energetic. One Saturday recently, when he had a few minutes on his hands, he took a baking book off the shelf; it opened to brioche doughnuts. He tried them, they were a huge hit, and now they’re on the menu, sprinkled with cinnamon-sugar ($4.50). One night, there were none left, but our waiter managed to get us some cinnamon-covered doughnut holes.

Now you see why I want to move in?