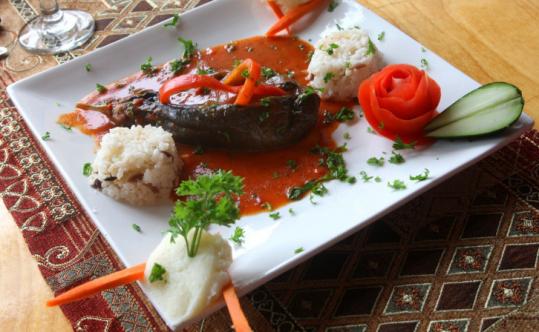 When Turkish-born Halit Candemir left behind a life in Istanbul working in hotel management and came to this country, he discovered Japanese food, then opened Tsunami Japanese Cuisine, sushi restaurants in Brookline and Arlington.

Six months ago, he turned the Arlington location into Pasha Turkish & Mediterranean Cuisine. Candemir hung a TV in one corner, which offers a video on Turkey in a dizzying continuous loop, and added fabric reminiscent of a Turkish bazaar.

Turkish cuisine, famous for its eggplant, skewers of meat, and well-seasoned dishes, is labor intensive and Candemir insists on making everything on the premises. Pasha has a single presentation style: the main element, crisp greens, two dabs of a vinegary potato puree at the edges, a little sauce or rice, and the entire plate sprinkled with parsley. The first time you see it, it’s stunning. Ten times later, it’s that same presentation again.

An exception is manti ($13.95), the best I’ve ever had (including in Turkey). Small ravioli are made with very thin dough, and instead of the usual dumpling shape, these are cigars wrapped around ground beef, mint, and cumin, topped with two sauces, one of yogurt, the other tomato, their edges mingling into a pretty pink mixture.

You’ll find exquisite eggplant, including Imam bayildi ($6.95 and $12.95), also known as “fainting Imam’’ (among the reasons he fainted, according to foodlore, was because the dish was so wonderful). Imam bayildi (pictured below) is worth fainting over. A whole baby eggplant is stuffed with raisins and vegetables and roasted with oil.

While you wait for your food, you can nibble on hummus, spicy chopped vegetables, olive oil, and warm bread. Hummus is Middle Eastern, of course; Candemir explains that Istanbul now features many Middle Eastern dishes, so this is on the menu along with falafel. The vegetables are chunky (they’re called mashed on the menu) and pleasingly hot, made with tomatoes, bell peppers, crushed red pepper, and pomegranate sauce. They come with some entrees, including grilled lamb chops ($15.95), nicely flavored meat off the bone, unfortunately full of gristle.

Sultan’s boat ($16.95) turns out to be thick slices of beef and lamb meatloaf topped with vegetables and melted cheese. Adana kebab ($14.95), named for the Turkish city, is perfectly cooked skewers of ground lamb and beef mixed with red peppers. Bland but also nicely charred are chicken skewers ($12.95).

Our attentive waitress is distressed when three of us barely make a dent in ice-cold rice pudding ($3.95). We make quick work of syrup-soaked walnut baklava, not too sweet, without a trace of honey.