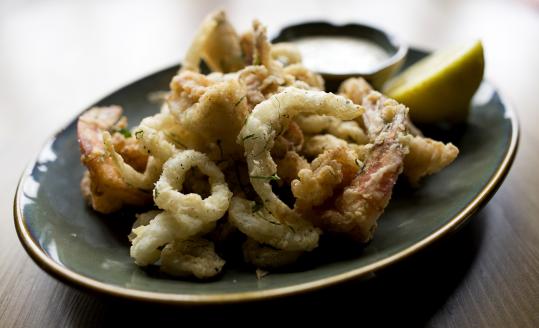 Former governor Mitt Romney, producer David E. Kelley, and Esquire restaurant critic John Mariani are in the house. You might expect to find such an assortment of diners in New York or Los Angeles. Yet the three are among the crowd at Il Casale, chef Dante de Magistris’s new Italian restaurant in Belmont, on a recent Tuesday night.

Crowd? Celebrities? Belmont? Tuesday? Il Casale deserves the attention and the attendance. With his father, Leon, and brothers Damian and Filippo, de Magistris has turned a former firehouse into a lovely restaurant, a large yet warm (and loud) space of brick walls, exposed beams, and high ceilings, lit by wrought-iron chandeliers and glass lanterns. The room is divided in half by long, dark curtains, with a lively bar scene on the left in full view of the Sox on TV, and a lively dining room on the right in full view of the open kitchen. The fire pole remains, though it had to be relocated: It was right in the middle of the garde manger.

The food is also lovely and lively. It is a snapshot of how tastes have changed. Rustic and simple are the new elegant. (A “casale’’ is a house in the Italian countryside.) Luxury may be best achieved by paring back, showcasing a few flavors and ingredients. These don’t need to be so-called “luxury’’ ingredients. Chicken liver on bruschetta can outsilk foie gras. A deeply porky broth with braised greens and a charred wedge of polenta - peasant food; something made, wonderfully, from little; every molecule of flavor squeezed from the pig - can be as complex as any creation from the rarefied air of the gastronomic pinnacles. This dish, minestra, has apparently made several grown men cry. It tastes like the minestra their grandmothers made, a long-lost memory rushing back in a spoonful. You may have to wait to find out if it has the same effect on you; it’s coming off the menu for the summer.

It’s no accident it tastes like Nonna’s; many of the dishes here are based on family recipes. De Magistris, who also runs the eponymous Dante in Cambridge, has created an appealing menu of sfizi (little tastes), pasta, meat and fish, and side dishes. There are also two family-style tasting menus: the Fiat, $35 for four courses, and the Ferrari, $60 for five courses plus sfizi and other such bites.

If you start with sfizi, don’t miss the meatballs, available in three fantastic iterations. There’s the traditional version, in a pure tomato sugo, or sauce. There’s a salt cod version, evoking the flavors of Sicily with pine nuts and raisins. Perhaps the best is the maiale, or pork - juicy and tender and filled, surprisingly, with mozzarella, in a pool of sauce made from pig’s head.

Then, too, there’s a little dish of burrata from Puglia. This fresh cheese is pillowy and runny, splitting the difference between soft-boiled egg and fresh mozzarella. It’s always a delight, but particularly when it shares a plate with pistachios and a sprinkling of Sicilian oregano. Milky, nutty, and bracing herbal flavors play off one another; the nuts offer textural relief from the stretchy curds. It’s a simple dish, but not as simple as it could be - the pistachios are ever so slightly candied, a lovely touch. The details are important at Il Casale. It’s clear from the moment you dip the excellent bread in the excellent peppery olive oil at the beginning of your meal.

It may even be clear before you set foot in the restaurant. One day we call for a 7:30 reservation, but all that’s available is 8:30. We take it. Hours later the phone rings. It’s Il Casale; they had a cancellation, someone wrote down that we’d prefer the earlier time, and they are calling to offer it to us. Prices here may not break $20, but you wouldn’t know it from the service. I’d say the wait staff is thoroughly drilled in both the food and the wine - I never once asked a question a server didn’t have an answer to - but the word “drilled’’ implies recalcitrance where there is only enthusiasm. The servers seem genuinely passionate about food, and they want to talk about it with you.

Order the chitarra and one staffer gives you the little smile-nod-eyebrow-raise combo that’s the server’s equivalent of a high five. That’s his current favorite, he says. It’s very good indeed, a rich carbonara of guanciale, organic eggs, and house-made pasta. Just as good, though, is the Vesuvio, named for a pointy, spiral cut of pasta made in Gragnano, a town on the Amalfi Coast that’s famous for its noodles. They’re chewy with nice heft, a worthy vehicle for toppings of tender goat ragu and melting caciocavallo cheese. Gnocchi are light little dumplings that mingle with favas, peas, asparagus, and porcini cream on the plate. One of the most revelatory pasta dishes is barely pasta at all: ignudi, or naked ravioli. Spinach, ricotta, and Parmesan are formed into fluffy rounds, then rolled in egg white and flour and boiled. The flour cooks into a tender caul of dough, barely there, holding in the ingredients. The ignudi then go into that pure tomato sugo, a dish conjured in a few big strokes, like a Japanese character: one, two, three, four, and suddenly it means something.

But Il Casale is the rare restaurant where the secondi outshine the pasta, and I tell you this as someone who could eat pasta every day and never miss the second course. (De Magistris has said he follows his grandmother’s rules here: use the best and freshest meat and seafood available, season it with care, cook it with respect, and serve it with a simple sauce.) The dish I will go back for is a wood-grilled trout, one of the best fish preparations I’ve eaten in a long time. It comes to you apparently whole, head on, skin dark from cooking. But the bones have been removed, and in their place is a skeleton of lemon and orange slices. The trout is moist and wonderful, a combination of wood smoke, citrus, coarse salt, and the sea. It sits atop a pesto of green olives, capers, parsley, and citrus. It’s so perfectly layered, I imagine a perfumer would appreciate the composition.

Seafood in general is a win here. The other two options are misto griglia and fritto misto - a classic New England choice. The seafood is fresh and sweet and simple. The fried version has a light batter and is an assortment of calamari, shrimp, excellent red mullet chunks, and “fries with eyes,’’ or baby whiting, tiny fish fried and eaten whole. The grilled version brings scallops, shrimp, sardines, and calamari, perfect mouthfuls of slightly smoky seafood with salt and lemon.

Wagyu beef from Australia is grilled over wood for a ridiculously good steak at $18. Lamb chops are also delicious, served with a smoky eggplant sauce. And a roasted chicken with lemon caper sauce is moist and full of flavor. The only dishes I try and don’t love are the veal saltimbocca, which is good but not as extraordinary as the others; the beef carpaccio, ditto (and it’s coming off the menu soon); and a cold side dish of green beans with olive and mint. The flavors don’t quite mesh. Sides of braised greens and spinach with mascarpone, however, are quite good.

The dessert the servers want to brag about is the frittelle. These eggy, beignet-esque pieces of fried dough are worth touting, though they deserve a more interesting swimming hole than the little dish of chocolate dipping sauce they come with. For a summer dessert, my vote goes to the panna cotta, which wobbles lasciviously in its dish when the server sets it down. The custard is served with strawberries laced with balsamic and basil.

The wine list features bottles largely in the $30s and $40s, with by-the-glass options from a summery Provencal rose to the food-friendly 2001 Cantina Sociale negroamaro. There are plenty of crisp Italian whites that will wear well this summer, perhaps out on Il Casale’s enticing patio. Also patio-perfect: a selection of well-made cocktails such as the Leone (a cousin to the Negroni but made with vodka) and a sort of prosecco Old Fashioned: a glass of bubbly with an Angostura-soaked sugar cube.

Il Casale’s food is wonderful, but the appeal goes deeper than that. With its menu of passed-down recipes, its crowds of locals, and its group tasting menus, the restaurant emphasizes family and community. Why Belmont? It’s the de Magistris clan’s hometown. Il Casale might make you wish you lived here, too.