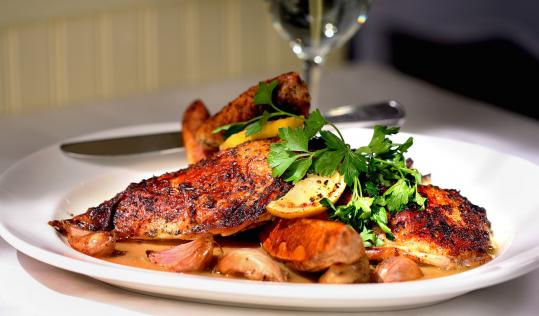 Roast chicken with garlic, lemon, and parsley at Hamersley's Bistro is a dish whose marinade and seasonings don't overpower, but rather showcase the bird. (Wendy Maeda/Globe Staff)
By Ike DeLorenzo Globe Correspondent / May 27, 2009
Text size – +

In a newspaper, you expect to read about new, dare I say, "hot," restaurants. After all, the chic Bostonian eco-foodie needs to know where to strike a pose this week. Where is everyone dining on terrine de mango with parsnip and urchin-roe foam?

But this in-with-the-new hype tends to overlook iconic restaurants - Boston institutions really - the places that spring to mind when you think about dining out here, the ones that make you feel like a Kennedy or a tourist hoping to run into a Kennedy.

These are the restaurants that still manage, after years - in some cases, centuries - to fill the house if not nightly, then certainly on weekends. A sterling reputation can rest on its laurels, even as it raises an obvious question about change: If something's been working for 97 years, why adjust it?

So in the spirit of casting a fresh eye on an established place, we head to five of the city's most venerable dining rooms and reconsider them through their signature dish.

Hamersley's Bistro
For 21 years, Bostonians in-the-know have been going to Hamersley's Bistro in the South End for roast chicken with garlic, lemon, and parsley ($27). And not just because their parents are in town. Favored by Julia Child, Shirley MacLaine, Jack Nicholson, and Leonardo DiCaprio, the dish is basically the perfect roast bird you cannot replicate at home. Ever. Very slow-cooked, then boned and finished in a pan with lemons and chicken stock under the crisping flames of a salamander, Hamersley's chicken can easily be cut with a fork and is an example of marinade (garlic, lemon, parsley, and spices overnight) and seasonings that showcase, rather than overshadow, the carefully raised hen. Served with roast potatoes and onions, it has become a legendary dish.

Other items on the menu are competent, but not as miraculous as the chicken. Chef and co-owner Gordon Hamersley has a sense of humor about this. "It's a simple dish, and it's a good dish," he says. "I'm a two-bit singer with a hit song." The roast chicken isn't just a hit, it's the restaurant's glorious national anthem. And the staff treats it with reverence. The same chef is not allowed to make the dish for more than six months, and Hamersley often personally supervises the preparation (he's the one in the kitchen wearing a Red Sox cap).

Originally, Hamersley's goal was to create a chicken dish every bit as good as the roast Bresse chicken at L'ami Louis, a renowned Paris bistro favored by Bill Clinton and French politicians. Bresse, of course, is located in France - so Hamersley cannot roast those celebrated birds. Instead he uses a 3- or 4-pound Bell & Evans chicken.

Even if your version of the dish manages, by some miracle, to come sort-of close, it's just not the same as being there in that quirky, famously yellow dining room, enjoying this dish for the first (or 20th) time.

Oak Room
The interior of the Oak Room at the Fairmont Copley Plaza is breathtaking. Well-heeled Bostonians have been gathering at restaurants in this space since 1912. Beautiful hand-detailed oak walls enclose a lush, comfortable, and, above all, Old World luxury dining room suitable (as it has often been) for heads of state, the rich, and the famed. One of the many shiny art panels at the back of the room is actually a clandestine two-way mirror (look carefully, the color is slightly different). Back in the day (perhaps now) it allowed managers to survey service and presentation, which are still impeccable. The room manages to be marvelously alive - not at all an antique. Large, brilliant cherry-blossom arrangements complete the enveloping mise-en-scene. You are greeted and treated like royalty by a dedicated staff, some of whom have been perfecting their craft here since this restaurant opened in the historic space 20 years ago.

Honestly, I am so enthralled that after we are seated I simply settle in and forget we were here to eat. The waiter seems used to this. "Welcome to the Oak Room, sir." We're off to a good start. I like being called "sir." I am wearing black pants, so I get a black napkin (to avoid lint and to match as you sit). I'm trying to be critical, but I'm already smiling.

The vast majority of the menu is local and organic, but I am told, apologetically, that the rarity of Chateaubriand ($95 for two) requires importation from Kansas. After appetizers, the steak is wheeled to our table on a dramatic silver cart and cut in front of us so I can verify the doneness. If you are not fully pleased, send the cart back to the kitchen to address the problem before it ever hits your plate.

This is the real deal. The beef is not mega-sized, it's not molecular-ized, it's not swimming in some high-concept sauce. It is that most classic and treasured cut, marvelously simple and wonderfully cooked, and accompanied by an entire bulb of fragrant roast garlic, cut open to accent the delicious aroma of the steak. I don't know if you are supposed to eat the steak and the garlic together - the Oak Room does not presume to give its guests dining instructions - but I eat each tender effortless slice of steak with a bit of the roasted garlic and it is heaven.

No. 9 Park
When I ask serious foodies about the most famous dish in Boston, the prune-stuffed gnocchi with foie gras, toasted almonds, and vin santo at No. 9 Park is suggested by the most people. Chef and owner Barbara Lynch developed the dish some 15 years ago after a trip to Italy to learn pasta-making. Our waiter recites the catechism: ". . . so she added foie gras, and the prunes, and the rest is history!"

The dish is marvelously clever. Light, expertly made gnocchi are stuffed with a soft prune filling. Each gnoccho is topped with a small slab of foie gras, then drizzled with a beurre blanc made with vin santo. Tiny cubes of prune - precision-cut and jewel-like - decorate the plate with tinier sprigs of chervil. It's a beautiful presentation, but you might think it would only be eaten by those who like prunes and foie gras - i.e. someone else's grandparents.

The genius of this dish, is (1) it is truly delicious and (2) you get to enjoy eating foie gras. It makes foie gras accessible to everyone, by offsetting its sometimes off-putting fatty richness with sweet prunes, and mitigating its unique animal taste with equally rich starchy gnocchi. My 14-year-old niece gobbles them up, calling them "soft pillows of pure happiness." Really. She even stops texting until they are gone. Just try getting your 14-year-old to eat foie gras on its own (or to stop texting). This is quite an appetizer.

But it is only an appetizer, and because it's so rich, one that is typically shared. Its fame gets people talking about and into the restaurant, where the superior service and very good menu have managed to keep them coming back.

Locke-Ober
It's been a week of interesting and memorable meals. And then I go to Locke-Ober. Indisputably one of Boston's most famous restaurants, it is best known for Lobster Savannah ($62), the star of the menu since 1875. The restaurant itself is a single, large, 1800's-era, dark-wood room with subtle lighting. At dinner one night, nearly everyone is having Lobster Savannah, a scene made more surreal by the very large size of the mostly untouched lobsters staring up at each of the mostly elderly diners. Dozens of the immobile red creatures are all oriented in the same position, head facing the diner, the way the waiter places them.

The dish is too dense and too much for most people to make a dent in. My waiter, who has been with the restaurant since 1968, still calls this the "small lobster." The large (3-pound) lobster was downsized in 1976 due to "health concerns."

The body of the 2-pound lobster is removed from the shell, cut in pieces, and cooked with a sauce made from a four-hour reduction of lobster bodies, sherry, port, and heavy cream. The amalgam is stuffed back in the lobster shell, and served. It's no wonder most diners do not finish the dish. The heavy pinkish-orange sauce militates against the delicate lobster meat, rendering it an intolerably-rich sauce-substrate. Lobster Savannah does not taste good, it's excessive, and very expensive.

Wealthy Harvard students reportedly host traditional and lavish invite-the-dorm dinners at the private "a la carte" dining rooms upstairs, to leverage the restaurant name and outspend one another on conspicuous excess (expensive lobster, wood-paneled rooms, trademark pink sauce). It just might be the best use of this restaurant.

Durgin-Park
This is the most casual of the restaurants I visit. The eclectic Durgin-Park wait staff is curt, intolerant of unnecessary questions (imagine how I went over), and refreshingly fun. Think your favorite aunt who has no time for your nonsense. It's intentional, and part of the shtick.

Since 1826 the restaurant has occupied a roomy historic Faneuil Hall space with large wood and mostly communal tables. Side dishes are good, and taste as if served in a very competent college dining hall; there are even little white flume-proof bowl-plates. New England classics like Indian pudding (slow-baked molasses and cornmeal mash served with ice cream) are faithfully and well prepared. Wine and beer lists are limited but adequate. The crowd on our night is a mix of local steak-lovers and tooly business-trip types.

This place is all about beef, mostly the aged-on-premises prime rib ($29 and $40). At the entrance to the restaurant, you pass a glass see-all meat-locker-as-exhibit, which, I assume, entices the very carnivorous up the stairs. There are two sizes of prime rib. I had the well-prepared, less expensive "Yankee Cut," which, at 1-pound, seems stressfully large. A 2-pound "Durgin Cut," the main feature at the meat-museum downstairs, is being devoured by some of the much bigger guys nearby. Three sauces are available for your steak (which arrives unseasoned). Don't taunt the waitress with polite questions about what "peppercorn sauce," "Bearnaise," and "Bordelaise" are. Just order one. Then relax and enjoy the steak. Once you've gotten your food, the waitstaff is not going to disturb you - maybe for a long time.

"People like Durgin-Park because it's simple and New England, and because it hasn't changed," says general manager Seana Kelley. "It's familiar, and it's comfortable."

Ike DeLorenzo writes about food and wine. He can be reached at delorenzo@gmail.com. Restaurant critic Devra First returns next week.