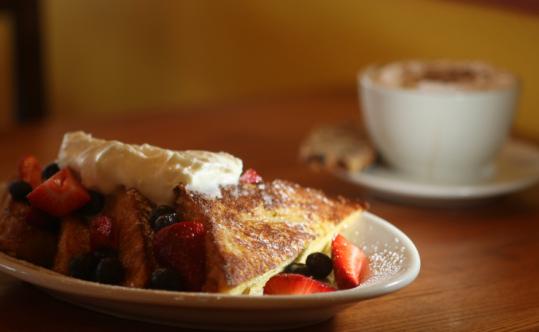 But when we ask about a herb vinaigrette, an unexpected species makes itself apparent: a high-end chef. We barely finish speaking before owner Jonathan Adelson bounds out of the semi-open kitchen to explain every ingredient as he stands beaming in his chef's whites. This gets our attention. Few cafes harbor the kind of chef who makes his own creme fraiche and then humbly claims, as Adelson does, "Everyone would make it themselves if they knew how easy it is."

Still, the menu at Teele Square, which Adelson opened in the former Cafe Soleil space in March, is basic. It runs from breakfast and baked goods to soups, salads, sandwiches, and two daily entrees such as thyme-rubbed chicken kabobs ($7.25) or sweet pulled pork ($7.25). But Adelson, who has worked at tony locales such as Aquitaine, Lumiere, and Upstairs at the Pudding, and formerly owned the casual 2nd Street Cafe, takes the same care with his Stroganoff ($7.25) as he does with a grilled PB & Fluff ($4.25).

Salads are impeccably fresh and extra touches add interesting notes to sandwiches: a splash of balsamic on a grilled portabello sandwich ($6.95), a drizzle of pesto with grilled chicken ($6.75), and a choice of cheese or bread for grilled cheese - try fontina on country white ($4.25).