THIS STORY HAS BEEN FORMATTED FOR EASY PRINTING
Cheap eats

Winging it all over again 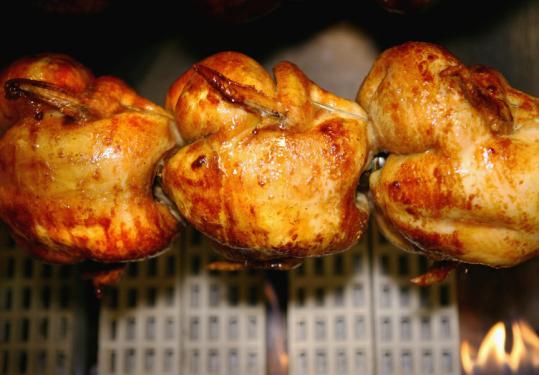 You have to admire the pluck it took to close a restaurant after 17 years and reinvent it a few blocks away. When Greek-born George Mavrogiannidis, who owned Chicken Express on Belmont's Common Street, was left without a lease, "a terrible situation became a good one," he says. Mavrogiannidis took over a former auto parts store on Belmont Street, renamed it C.E. Restaurant, gave it a bright coat of sunny yellow and terra cotta, and installed a new rotisserie to roast birds all day (the aroma is tempting from the instant you step inside).

Now, along with partner Kamel Alhady, who is Lebanese, Mavrogiannidis offers chicken at unbeatable prices with many sides and more than a dozen burgers, including an unusual veggie ($5.95), whose patty is made from falafel topped with hummus and tabouli. There's not enough hummus, but we have a side order of the chickpea spread and heap it on. Only the bun is disappointing. A Greek burger ($5.95) boasts fine-tasting beef with feta and black olives and the same sad bun.

Chickens (whole $8.95, half $4.95, quarter white $3.95, quarter dark $2.95) come off the rotisserie gloriously golden and full of flavor but three different birds have dry white meat. You can order a meal called "3's company" ($17.95), which includes a whole chicken, two large sides, and cornbread. All chicken dinners come with big squares of the yellow bread, which is sweet and cakey. One of our dining guests, a longtime customer at Chicken Express, tells us to toast it for breakfast the next day, which seems like the best idea.

Some sides ($2.45 and $3.95), such as baked zucchini and grilled vegetables, are fresh and well made. Fattoush, the Middle Eastern salad of greens and pita, is little more than a good salad with bits of bread. A bean salad medley, a robust cluster of red and white beans, comes undressed.

Souvlaki (a pita roll-up) sits on a dense, delicious flatbread, thicker than regular pita and up to the task of holding meat and vegetables. Kafta ($6.95), a long juicy sausage of ground meat, is packed with crisp salad vegetables and cucumber sauce.

For dessert, a homemade rice pudding ($2.75), dusted with cinnamon, is an old-fashioned treat. We ask if anything else is homemade and we're told the chocolate cake ($2.75) is, so we order it as well. It is dense and moist, but made by hand? "Homemade from a mix," announces a dining companion, wolfing down his portion and then another. SHERYL JULIAN