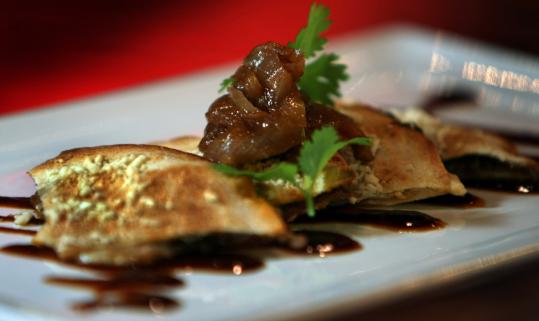 If it's a new restaurant in the suburbs, it must be Italian. This has started to seem like a rule. So it's a relief when a restaurant opens in the suburbs and does something different. Apparently a lot of people agree, because on a Friday night, Masa Southwest Bar and Grill in Woburn is doing the kind of business many restaurants would envy.

Perhaps its reputation precedes it. This is the second branch of the Southwestern fusion restaurant. The first Masa is in the South End, and it draws shiny young things with the lure of margaritas and reasonably priced tapas and brunch. Walking by one recent Thursday around 11 p.m., I see through the window a klatch of heeled women performing the awkward side-to-side shuffle of the salsa neophyte, with patient tutelage from a suave ringleader.

In large part, the Woburn crowd seems like the South End audience with the words "10 years later" appearing at the bottom of the screen. (Appropriate, as the original Masa opened in 1999.) They've grown up, had kids, and moved to the suburbs, but they still like margaritas and tapas. They must be happy at the new Masa, which opened in December with chef Sean Wesoky at the helm, because much is the same as at the old.

"The menu's really similar to the one in Boston," our waitress says one night, "only not as spicy. People there like spicy." It's as if she's talking about another culture, and in some ways I suppose she is. On a Tuesday at Masa in Woburn, the kitchen technically stays open till 10, but the staff closes it up early. It's a school night, and everyone wants to get home.

In terms of food, though, school nights are when to go. As with many restaurants, the busier the kitchen, the less well executed the dishes. This is more apparent with the finesse-requiring entrees than the appetizers, which seem more consistent from visit to visit.

As at Masa in the South End, there's a tapas platter of little bites for $1 each, or $10 for a plate of all the offerings, available only in the bar. Some of the items are tastier than others: lamb spring rolls with guajillo bourbon barbecue sauce and chicken taquitos are satisfying twists on fried bar snacks, for example, while tostones are tooth-shattering discs of plantain, and chicken skewers with chipotle peanut sauce are dried-out chunks of meat. Still, there's no way this isn't a good deal.

One of the best things on the menu is a first course of fish tacos, generous pieces of battered tilapia folded into tortillas with shredded cabbage, pico de gallo, and avocado mayonnaise. If I wanted to watch a game at the bar, I'd have these and a beer and feel pretty content.

A smoked barbecue duck and gouda quesadilla is another good choice. It seems the flavors should be more complex, with the smoke, the barbecue sauce, and tamarind onion compote in there, but they meld to create a blast of simple smoky sweetness - and there's nothing wrong with that.

Queso fundido is a dish of pure guilt - a vat of slightly spicy melted cheese with chorizo, plus folded tortillas for dipping. Queso fundido is worth eating only when it's really good, and Masa's falls short. The flavor is all right, but there's a giant pool of orange grease on the top, and the texture is all wrong, mushy and grainy rather than gooey.

What could be brighter and more refreshing than a salad of greens, hearts of palm, manchego, oranges, pepitas, and lemon chili vinaigrette? A salad of all those ingredients that's made differently - this one is bland, without enough dressing, the elements never knitting together. It's an antidote to the queso fundido, however.

Steak frites with a Southwestern makeover achieves the liveliness of flavor the salad aspires to. Juicy, medium rare meat comes with more of the guajillo bourbon sauce, good fries, and a chili-lime arugula salad.

Grilled pork tenderloin takes a page from the same book, again juicy and perfectly cooked, with vibrant cilantro chimichurri. It comes with rajas, strips of spicy-but-not-too-spicy creamed, roasted chilies, and a rectangle of corn bread stuffing.

These dishes succeed with clear, zingy flavor combinations and straightforward preparations. Others muddy the issue by attempting too much at once - for example, mahi mahi with smoked mussel and papaya salsa, charred poblano risotto, and red chili coconut sauce. The fish is OK, but the mussels are straight-from-the-fridge cold, and the plate is an indistinct muddle of gummy risotto and various sauces. A dish of tilapia with green chili sauce, roasted garlic pozole mash, and melted leek and lardon salsa follows suit. Too much fusion! Keeping things unfused is sometimes a fine idea.

Braised lamb enchiladas do a better job of combining elements without seeming forced. The tender meat is rolled in tortillas, perked up by cranberry-raisin chutney, and paired with pumpkin barbecue sauce and hominy. It's very New World Thanksgiving, in a good way.

A roasted heirloom apple tostada would be the rightful dessert to that Thanksgiving meal, but it's dull, with tough crust. Churros are stumpy, resembling tater tots, and are undercooked at the center. A chocolate truffle tamale is essentially gooey chocolate cake wrapped in a husk, served with vanilla ice cream and raspberry sauce. It sounds like a hateable fusion abomination, but it's really quite tasty.

There are plenty of cuisine-appropriate cocktails, including a decent enough margarita - you can order one in a glass bigger than your head, with straws sticking out of it, for slurping among several people. The classic margarita is better than the premium, which tastes like Vitamin C tablets. A smoked jalapeno margarita is oddly and enjoyably spicy-sweet.

The new Masa has similar design features as the old - brick, big mirrors, metal wall hangings shaped like suns, and a central bar area. But the South End restaurant is dark and lair-like; the Woburn branch is brighter and more open, decorated in creams and tans. It's more grown up. But that doesn't mean it's having any less fun.