Not shaken or stirred by Bond 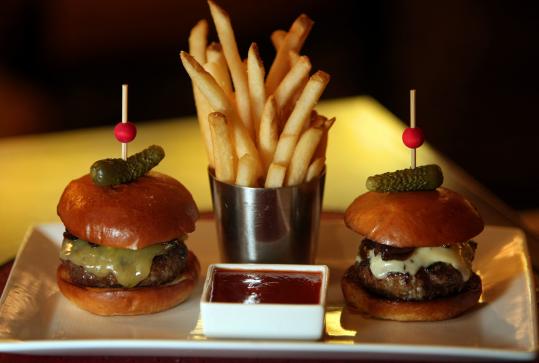 The double cheeseburger is actually two single-burger sliders, one with cheddar and bacon, the other with blue cheese and caramelized onions. (John Tlumacki/Globe Staff)
By Devra First Globe Staff / April 1, 2009
Text size – +

Bond takes you for a ride in the wayback machine, to a time when money flowed, nightspots were luxe, and people went out without troubling their pretty heads about recessions, stimulus packages, or bonuses other than their own. This Financial District restaurant and lounge, located where Julien once was in the Langham Hotel, is a space of plush carpets and grand chandeliers, marble balconies and vaulted 25-foot ceilings, browns and burgundies and plenty of mirrors. It's housed in the former Federal Reserve Bank and decorated with large-scale reinterpretations of various denominations of bills. Here the dollar is art, and dead presidents gaze down on after-work hobnobbing and after-after-work flirtation with faint smirks. The scene gives you some of the flavor of a Bret Easton Ellis novel without all that pesky reading.

In case you missed the name, the art, or the rich decor, the cocktails tell you this place is money. They have titles such as the Euro, the Yen, Smackers, and Dough (all priced in dollars, mercifully). These tend to sound better than they are; the offerings we tried were for the most part oversweet and undercold. There are also more than 25 single malts on offer. And there is Dom Perignon by the glass: $50.

Chef Mark Sapienza's food avoids cutesy money-themed names, but that doesn't mean it lacks currency. It capitalizes on the trends of small plates and international influences, encompassing everything from escargots to empanadas, Chinese dumplings to chicken curry with naan. This food festival is laid out confusingly: The menu is divided into sections labeled I, II, III, and IV. These seem to be, respectively, snacks, appetizers, entrees, and desserts - stylistically at least. Some from I are bigger than some from II, some IIs are big enough to be IIIs, and IIIs are quite a bit smaller than your standard entree. When we ask our waitress how many dishes to order per person, she says, "It depends. Tell me what you want, and I'll tell you if it's too much." We list an outrageous number of dishes. "Perfect!" she says.

The problem is fitting them all on the tiny table, low leather seats clustered around it, a setup clearly designed with lounging in mind more than dining.

The dishes arrive in quick succession. In the I category, a basket of house-made potato chips makes for great snacking. They're nicely fried, with just the right amount of salt. They come with a creamy dip topped with strips of crispy shallots. The white substance is too thick for dipping and adds little in terms of flavor, while the fried shallots are too similar to the potato chips themselves. Ignore the dip, eat the chips.

Tuna and beef tataki is a compartmentalized plate of just-seared slices of fish and meat, rolled up and staggered with servings of seaweed salad and vegetables. The soy-and-citrus sauce they're served with is refreshing and full of flavor, which can't be said for the poached colossal shrimp. They are outsize as billed, though, and served prettily with lemon slices curled in their tails.

A II of calamari is coated in cornmeal and offers good crunch. It's not as light as some renditions but comes in a pleasantly sweet-spicy chili sauce, and the serving is generous for $12.

A fricassee of snails and mushrooms is a rich stew served in a little pie shell. With more seasoning and less-rubbery snails, it could be good Franco-comfort food. Lamb kafta come in a tiny tagine, a very cute presentation, but the meatballs are dense and dry.

Chinatown ginger pork shaomai are served in a steamer; the dumplings take 20 minutes to prepare, we're warned. They are the last entry in our cavalcade of dishes - 10 plates in 20 minutes. This isn't Domino's; it's OK if it takes a little longer. We're forced to wolf the earlier arrivals in order to make room for the next. A bit of pacing would be welcome here - after all, we're trying to lounge, aren't we? At any rate, the dumplings are plump, tender bites filled with juicy pork and crunchy bits of water chestnut. The soy, scallion, and honey sauce they come with is heavy on the honey, but the dish is tasty anyway.

Not so much the clam and pancetta pizza, the slices of which flop down like a dog's tongue when you pick them up. The pancetta bits are incredibly salty, and the clam bits chewy.

In Act III, truffle-scented mac and cheese is creamy and mild, topped with crunchy crumbs. It tastes neither like truffle nor the full-flavored cheeses it's said to contain - cheddar, gouda, and Woodcock Farm's Timberdoodle - but it is good.

Cashew and coconut milk curry chicken is very flavorful, belying its uniformly brown appearance. It's heavy on the cinnamon and sweet; the spicing is overpowering. It comes with a side of plain naan. A dish of tuna with white beans is a great combination; the fish is slightly overcooked but nicely flavored with fennel seed, and the tender beans are enhanced with lardo and olive oil. Arugula adds freshness.

Steak frites is a truly delicious piece of meat, nicely chewy and perfectly cooked, but served cold. The frites prove to be the skinniest fries ever, cooked past golden but also cold. The "double cheeseburger" - two sliders, rather than a double-decker - comes with better fries and at a better temperature. One mini burger is topped with cheddar and bacon, the other with blue cheese and caramelized onions. It's a satisfying duo.

Dessert options include a mango tres leches cake that's more like una leche. It's too dry; it should be soaked in milky sweetness. There's a trio of "seasonal" cremes brulees - a chocolate one is too thick and mousse-like, but the others (pistachio torrone, a strangely citrusy mojito, and caramel) aren't bad.

Still, I'd rather spend the calories on chocolate-dipped cheesecake lollipops. You can dunk them in several accompaniments: cashews, chocolate and raspberry sauce, and - the coup de grace - bright green Pop Rocks. (Not only do you not die when you eat them with soda, I can now confirm that they're perfectly safe to consume with single-malt Scotch.) It's the perfect dessert for Bond: flirty, easily shareable, and fun.

At 10 p.m. Thursday through Saturday nights, a DJ sets up in the balcony, spinning what Bond's website refers to as "eclectic beats." (The '80s must have been a very eclectic decade.) No one really dances, but the waitresses suddenly shed their jackets, revealing sleeveless dresses. "Does that bother you?" someone asks our server about this staff-wide skin baring. "I like it better this way," she says, tossing her hair. It's unclear whether she's having a sexy girl power moment or just means that jackets get in the way while waiting tables.

By the bar, a woman in a pink sweater with matching headband and a new acquaintance suddenly get very friendly, then move on to other new acquaintances. The cougar contingent waits to pounce. Men exchange business cards. Women with accents parade fashions from their native lands. Men drink Scotch and exchange more business cards. Slowly but surely the prettiest guy and the prettiest girl in the room find each other and enter into conversation. Bond: It's not just a noun, it's a verb. Perhaps it's an imperative. In these times, people have to stick together. And where else will you find out what happens when you chase Pop Rocks with a $50 glass of champagne?