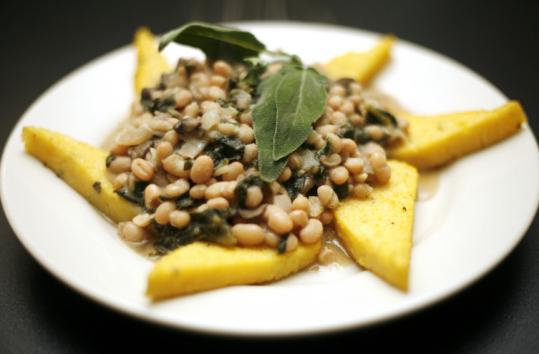 The first time we set out for Vej Naturals, an almost-year-old vegan restaurant in Malden, we use the Google map on the restaurant's website. We end up on a residential block staring at a private house. Were we going to eat in someone's home kitchen? When we call the restaurant, we discover that the online map's address is one digit off; Vej Naturals is actually a couple of blocks down the street.

The restaurant is across from the Oak Grove Orange Line stop. Its white facade and wide farmhouse door make it look more bucolic Vermont than suburban Boston, appropriate since before moving to this area chef Robert Bouley and his wife, Lisa, owned a vegan restaurant in Montpelier.

Inside, the walls of the 14-seat dining area are a cheerful green, and a high counter separates diners from Robert Bouley's kitchen. Bouley is so close to his customers that he can (and does) chat with them while cooking.

Those who expect vegan food to be bland, uninspired, and a chore rather than a pleasure are in for a surprise. Bouley turns his organic ingredients into well-made, flavorful food that even nonvegans will find appealing. Caesar salad ($7) is an enormous plate of romaine, grape tomatoes, red onions, chickpeas, and croutons, tossed with an amazing dressing that Bouley makes from ground almonds, olive oil, lemon juice, garlic, and nutritional yeast to give a cheesy flavor. We have to make ourselves stop eating to save room for entrees.

Tuscan beans and polenta ($12) is a hearty stew of white beans, kale, mushrooms, and sage served over polenta wedges that are crispy outside and chewy inside. Eggplant cutlets ($12) are beefy slices of vegetable breaded and perfectly fried so they're crunchy on the edges but soft inside. They're covered in a bright, tangy marinara sauce and served with pasta.

The menu changes periodically, but one constant is Caelee's Favorite Tofu ($12), named after the Bouleys' daughter. I'm not a tofu fan, but this dish could change that. Chunks of tofu are marinated, coated with a cornmeal and spice mixture, then pan-fried. Served with mashed potatoes and remarkably meaty-tasting gravy, it's comfort food.

For dessert we try a moist, tangy lemon cake topped with blueberries and sweetened silken tofu ($2).

On one visit, our server raves about Bouley's inventiveness and the quality of his food. Then she says proudly, "He's my son."

I guess we ended up in someone's home kitchen after all.