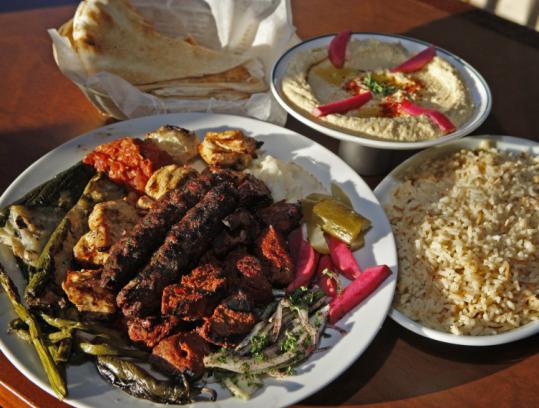 There are many places to service your car on New Street, the little road that follows the railroad tracks behind Fresh Pond Mall in Cambridge. You can get a new transmission, buy an air filter, watch the dents get knocked out of your bumper. Now you can also service your stomach: A squat brick building with exposed steel beams has been transformed into Basha Cafe, a Middle Eastern restaurant that opened a few months ago in this restaurant wasteland.

The food is a mixture of Lebanese and Armenian, with many familiar dishes, like falafel and kebabs, as well as more unusual Armenian sausages and a spicy chicken soup. The owners are trying to create an upscale alternative to the hordes of cheap Middle Eastern restaurants scattered around Boston. At Basha Cafe, the sleek silver bar, glowing with blue and green light, serves up Glamourtinis and Hypnotinis and French Elderflower Martinis. At night, the restaurant turns into a nightclub, with bellydancing, salsa, Greek bands, and karaoke on different days. The prices are upscale, too, and that may be hard to sustain, though portions are colossal. One night, a helpful waitress dragooned a nearby empty table to accommodate all of our dishes.

At dinner, Basha pushes the monetary bounds of Cheap Eats, with many entrees exceeding the $18 limit, but most of the menu appears more cheaply at lunch. The cafe also serves many smaller dishes, including mezze and salads. The fattoush ($9) combines onions, tomatoes, cucumbers, and slivers of red cabbage with crunchy rectangles of toasted pita in a vinaigrette. It's delicious and tangy, heavy on onions. We were less impressed with the eggplant salad ($10), garlicky but still bland compared to its eggplant brethren in baba ghanoush ($9). The best testament to the fantastic hummus ($8) was that, alone in a sea of food, it disappeared - and quickly.

The ma'anek ($10) are the milder of the beef and pork sausages on the menu, almost sweet, appealing to the palate of our 3-year-old. The chicken shawarma ($18.95), itself a sizable plate of chicken, cut from a spit turning in the open kitchen and wrapped with vegetables in a warm pita, arrives, like all entrees, with a bowl of hummus and more pita, a salad and a choice of rice or thick steak fries.

After our visits, Basha introduced desserts: several kinds of baklava, cheesecake, and chocolate cake. We challenge you to find room for them.