Hard-to-find Sensing is on the verge 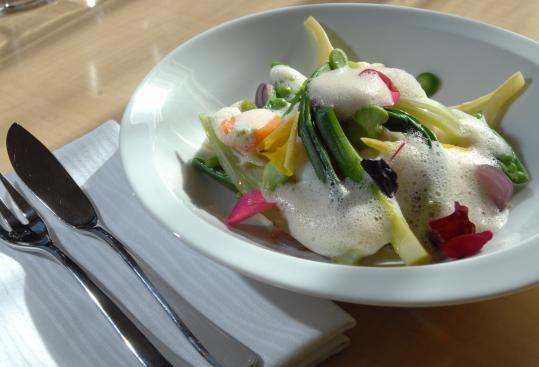 Cod steamed in lemongrass with seasonal vegetables is served over soba in a coconut and grapefruit sauce. It's light and invigorating. (Photos by Josh reynolds for the boston globe)
By Devra First Globe Staff / March 18, 2009
Text size – +

It was a big deal. Chef Guy Martin, he of the multiple Michelin stars, was coming from France to open a restaurant here. In Boston, we the Michelin starved. People got all excited for a world-class restaurant, and then. . .

We waited. We wondered. The hotel that the restaurant was to occupy changed hands and became the Fairmont Battery Wharf rather than the originally intended Regent. And, finally, Sensing opened. Martin stayed in town for about a minute, making sure the nouvelle cuisine was in place, then returned to France. He'll be back a few times a year. Sensing is now largely in the hands of chef Gerard Barbin, formerly of Martin's Le Grand Vefour in Paris.

It's not Martin's absence that makes the restaurant feel forlorn, however. That comes from the lack of foot traffic outside a luxury hotel/residence on the waterfront in the middle of a freezing winter and economy. On a recent Saturday night, the dining room is nearly empty; it's not likely to get any fuller until the restaurant gets better signage. (Does anyone know where Sensing is who hasn't deliberately set out to find it?)

When there are a few large parties in the dining room, the kitchen seems overwhelmed. On several occasions we're asked to wait at the bar, though we can plainly see empty tables. At first, it seems the restaurant is out to gouge us with cocktails, and as gouging goes, these can do real damage. On one visit, the most expensive, a French 75, was $20 (it's now $19). It appears to simply be a lovely, perfectly balanced mix of Champagne, gin, and lemon. Is it worth the price? No. Is any cocktail?

On further observation, it seems the kitchen may simply be in the weeds. (The tip-off: overhearing one staffer tell another, "We're in the weeds.") It's faintly comical given the lack of bustle in the dining room, yet one feels a real pang of sympathy: How can a restaurant get a sense of staffing needs when business is so erratic? Many restaurants are trying to negotiate these waters; it's trickier for a new one, not to mention a new one with minimal signage.

The pang deepens when you realize there is talent here. This is particularly the case when it comes to hospitality. The general manager, a towering man with a fabulous accent, is solicitous and watchful. The bartenders are skilled (the Sensing martini is excellent). The waiters are knowledgeable, and just nice people. And on its best nights, the kitchen shows flashes of brilliance.

Therefore, it's all the more annoying when it doesn't.

The menu is seasonal, often local, and pleasingly small. It consists of the "Sensing snacking platter," which contains six small bites; five starters; four fish and four meat entrees; some cheese and four sweets. That's all you really need, especially when most of the offerings sound intriguing and anything but routine.

The snacking platter comes with instructions about what order to eat things in: Start with the oyster, which comes with a sort of mignonette granita. It's refreshing and a really good idea. Then proceed to guacamole and passion fruit eclair, the tiniest pastry with green goo piped inside. The combination of flavors is strange but not delightful, the eclair a bit stale. Next, a bite of foie gras creme brulee. On one occasion, this duck liver mousse with the crisped sugar top is heaven on a spoon. On others, its musky flavor is far too intense. A mussel shell is filled with tiny cubes of beet and smoked mussel; a cube of tuna rillettes is crisped and speared with a wisp of pickled ginger on a toothpick. The flavor is good but the fish is dry. And last, at the center of the plate, is a little cup of Jerusalem artichoke soup, which tastes something like a melted Yankee Candle. The problem with this platter is that it's designed to delight you with whimsy, to surprise your palate, and it never really does.

Nor do the other starters. Cauliflower and quince soup somehow tastes like neither, but of the chestnut foam and hazelnut oil that adorn the bowl (they're now using wasabi oil instead). This soup needs neither foam nor oil - it mostly needs its main ingredients and an immersion blender. You'd only order it if you like cauliflower and quince, you see. Lobster salad is pretty, the meat laid out on the plate with butternut squash and a sauce made from mangoes, but the lobster itself has no flavor whatsoever. It also costs $21.

An entree of tuna is arranged like a Zen rock garden on the plate. Big hunks of fish, seared on each side and bright red in the middle, are interspersed with tiny turnips hollowed out and filled with a fennel-based, Indian-spiced puree. The turnips are delicious, but the palate eventually tires of the tuna.

The cod, on the other hand, is a nearly perfect dish I'd like to eat again and again. It's steamed in lemongrass with seasonal vegetables and served over soba in a coconut and grapefruit sauce. It's light, invigorating, and soothing and exciting at once. The bright note of grapefruit works wonderfully with the creamy coconut, earthy soba, and herbaceous lemongrass.

Roasted, lacquered duck breast is served with confit duck leg wrapped in pastry. The menu says this is phyllo, but it lacks crispness; this part of the dish tastes like deep-fried egg rolls from a Chinese takeout joint. The duck itself is good, but the dish isn't worthy of the rave it gets from several waiters. Maybe we hit it on off nights.

Perhaps the least successful dish on the menu is chicken breast stuffed with smoked trout, the Sensing version of turducken. It's served with hazelnut oil polenta and chorizo sauce. The fish and the chorizo are overwhelmingly smoky, and the trout doesn't go with the chicken.

Lamb loin, however, is wonderfully tender, juicy, and flavorful, cooked perfectly. Its peanut crust has the taste and texture of smashed Butterfinger filling, just not so sweet. There's a little too much of it on the meat, but the flavors work well together. The sweet potato gnocchi on the side are chewy and dry.

On each visit, the chef sent over a vegetable side; a rectangle of simple, fluffy potatoes with olive oil was a pleasure. Entrees come with little white pitchers of extra sauce, unnecessary but cute. (Sensing's tableware - curved plates, angular butter knives - is lovely.) The wine list is surprisingly small and covers the expected bases, with an emphasis on fairly expensive French bottles.

For dessert, chocolate and caramel pie would be thoroughly wonderful if the chocolate filling were much less sweet; it's studded with crunchy bits of caramelized sugar and served with peanut ice cream. A dessert called "lemon and yuzu crystalline" lodges in the memory the same way the cod does. It comes in a goblet sealed closed with a thin sheet of citrus-flavored hard candy. You shatter it with your spoon, sending shards into the glass below, to be eaten along with lemon sorbet, yuzu gelee, and bits of cookie. It's full of great flavors and textures, and fun to eat. The kitchen should take the cod and this dessert as jumping-off points for the rest of the food.

At the end of each meal, a waiter brings over a plate of truffles and pates de fruits, then, separately, a little bowl holding something white and round. Is it a mint?

"Don't eat it!" the server must hastily interject each time, as an unsuspecting diner's hand moves toward the dish. It's not food; it's a bit of after-dinner theater. When your server pours hot water from a pitcher on the disc, it swells and blossoms into a cloth with which to wipe your hands.

Unfortunately, when the trick has to be explained, it no longer feels like magic.

May we suggest Cod steamed in lemongrass, loin of lamb in peanut crust, lemon and yuzu crystalline.