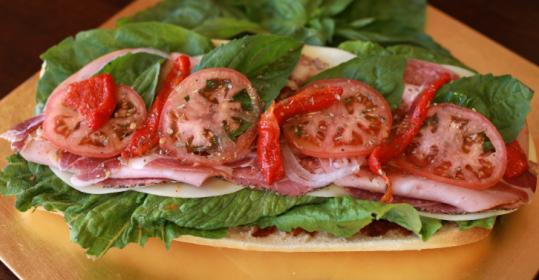 There's a sign in Italian on the front window of this small trattoria: "Chi Mangia Bene, Vive Bene." Who eats well, lives well.

It's a fitting slogan for Santoro's, which is the sort of place that feels and smells as if you've entered your grandma's kitchen. There are just a few tables; the place does a brisk takeout business. But if you have time, grab a chair and eat in. It's a cozy and warm spot and the aromas of garlic and baking bread make your mouth water before you've even ordered.

Tina Santoro opened the trattoria a year ago. She says she has no training, but that's not exactly true. From age 11, she worked in the Roslindale Square bakery owned by her father.

In her own shop, if you're lucky, you'll score a slice of her heavenly potato pizza ($3). It may not sound appetizing, but it is surprisingly delicious and not as heavy as you'd think. She bakes the crust twice, to make it crispier, and slices the potatoes almost paper-thin, sandwiching them between a bechamel sauce and mozzarella. There's a slight crunch to the potatoes and cheese, and fresh rosemary and garlic add a crowning touch.

This is the kind of place where you order at the counter, to eat in or carry out. A refrigerated case holds freshly made portions of chicken parmigiana ($8.99), eggplant parm ($7.99), stuffed shells, manicotti, or ziti and meatballs ($6.50 each). They're pre-cooked; you just need to heat them at home. Or Santoro will bring a hot order to your table.

The chicken parmigiana has a nice crust and is simmered in a slightly chunky, garlicky tomato sauce, with a coating of oozy mozzarella. Try the meatballs and ziti, the golf-ball-size orbs made of hamburger, veal, and pork - "the holy trinity," Santoro calls them. The lasagna is a thick, multilayered slab made to her dad's recipe. Sometimes there's calzone, which on a recent day included broccoli, Swiss, and mozzarella, sprinkled with sesame seeds ($2 a slice).

The foot-long sandwiches are a good bet, too. The Vinny Sr. ($7), named for her father, is a meatball sub, with a layer of provolone placed on the bread, then the meatballs and sauce topped with grated cheese. Santoro puts homemade stuffing and cranberry sauce on the turkey and cheese sub she calls The Grayson ($6.50), named after her son. We only wish the bread with the eggplant sub ($7.25) were a little crunchier; with such a heavy load to carry, it's a bit soggy.

Do not miss the desserts. Almond or lemon biscotti ($1.50 each) are divine; the almond crunchier, the lemon chewier, each with a glaze. Brownies ($2.50-$3) are fudgy with chocolate chunks, whoopie pies ($3) are like overstuffed chocolate buns filled with a rich cream. On one recent visit, a three-layer peanut butter Fluffernutter cake ($4 a slice) fed two of us easily and very, very happily.