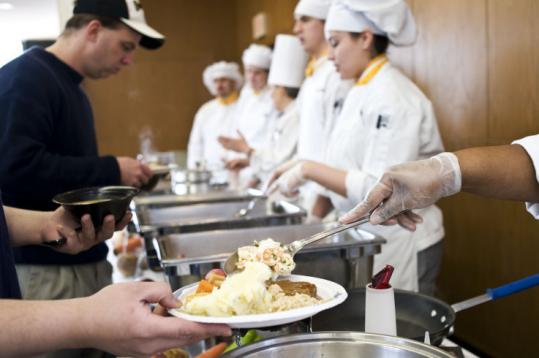 As I enter the Weltman Dining Room on the campus of Newbury College, I remind myself that these are student cooks, not professionals. I needn't have fretted. The students put out a very good, if standard, Indian buffet. Newbury's culinary program offers lunches and dinners throughout the school year. It's a chance for students to show off what they've learned, and for diners to get an affordable meal in a lovely setting. (No jeans or sneakers allowed.)

Mitton House, a stately Georgian Revival building, was formerly occupied by the president of Jordan Marsh department stores. Students in chef's whites prepare an international buffet on many Saturdays ($15), with an a la carte menu for weekday lunch (average cost $12).

We opt for the Indian buffet and sip a rich mango lassi. On each table is a saucer of mango chutney and a cucumber dip, along with peppery oil for bread-dipping. The first course, which we fetch at the buffet, is mulligatawny soup. First introduced by the British, this chicken soup is a hearty, aromatic bowl, creamier than most, with chunks of chicken, diced apple, celery, onion, and raisins, infused with green pepper and curry.

We return to the buffet for the main offerings. By the time we're through the line, we've got a colorful plate. There's tandoori chicken, baked in a very hot oven because the school lacks a tandoor, or clay, oven. ("It's on my wish list," says Madonna Berry, instructor of international and contemporary cuisines.) Still, the chicken, marinated in yogurt and spiced with red pepper, is moist and flavorful.

On the line, students explain their dishes. One scoops a generous portion of saag paneer onto my plate, the green spinach a nice contrast to the scarlet chicken. This dish includes chunks of a bland cheese made by the students; a shot of garlic and ginger spices things up. There's a side of chickpea chana with roasted cumin and coriander.

Basmati rice is fine, but I'm happier when a student stir-fries shrimp curry and brings a plate to each table. The plump shrimp are fiery, with red pepper and cilantro in a tomato-based sauce, and are a perfect match for the rice. The naan is garlic-cilantro; it's more like grilled pita bread, not the slightly puffy bread traditionally made in the tandoor.

Desserts are on a separate table; we help ourselves to all four and are pleased with rice pudding studded with crunchy almonds, a sweet carrot pudding with pistachios, a yogurt "shake," and slices of sheep's cheese with almonds and pistachios.

Who knows? We may have been customers of a future celebrity chef.

Liquor Bring your own wine.