A new home for fine flavors 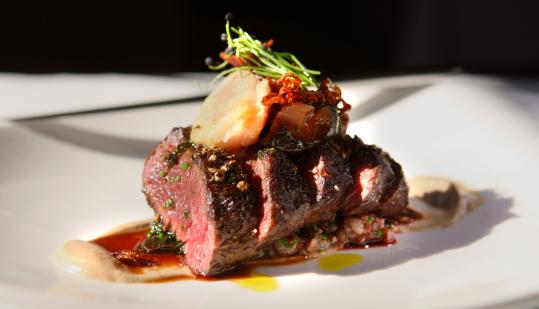 Craigie is out of the basement. In November, chef Tony Maws and crew moved from their subterranean digs on Craigie Street in Cambridge to a comparatively vast space on Main Street formerly inhabited by La Groceria. But what to do about the name? "Craigie on Main" preserves the legacy of Craigie Street Bistrot with veracity, if likely confusing newcomers and out-of-town visitors.

What's different? The kitchen is bigger, one can easily see, as it's smack in the middle of everything, the heart, open and beating: Maws yells out commands, the staff works in concert, their faces growing tight and weary as the night wanes. The kitchen is beautiful, bright and shiny and tastefully tricked out, the kind of space that makes you want to cook when you look at it. Maws practically lets you in; there are a few ringside seats at a counter.

The dining room is bigger, too, up about 20 seats from the old one. It no longer feels as if you're eating in someone's mildewed rec room dressed up with framed French posters (though the posters remain). Something is gained, something is lost. Craigie on Main looks just like a restaurant should, handsome and welcoming. But it doesn't feel like a basement speakeasy. Eating at Craigie Street Bistrot made you feel you were in on a well-kept secret, even as you knew you weren't (the accolades from Food & Wine magazine gave that away).

Perhaps the biggest difference is a bar area, with several little tables and a menu of its own. This features the likes of bone marrow, pork jowl croutons, and a very good cheeseburger of local, grass-fed beef served with funky mace ketchup and a pile of sweet potato fries as thin as fingernail shavings. (Salt isn't listed as a burger ingredient, but there's enough to qualify it for inclusion.) You can also order off the regular menu. Eat a full dinner in this more casual side of the restaurant and you'll witness several waves of customers come and go; the bar is doing serious business.

Heading it up is Tom Schlesinger-Guidelli, formerly of Eastern Standard. With him he brings the bartender equivalent of perfect pitch (try the Northern Lights, a harmonic convergence of elderflower, Douglas fir, and Scotch), a love of bitters, and groupies. "I'd order Fernet Branca, Tommy, but I have a bottle at home," a young woman confides, showing off her knowledge of the cult liqueur. A few seats down, a fellow bartender is sniping about colleagues around town. If esoteric descriptions aren't your thing, the cocktail list will give you a headache; wording such as "Updated Friend and Modern Technique" (Vergano's Bronx) and "Alpine Elixir meets Le Grand's Masterpiece" (Florentine Flip) can be confounding.

What's not much different is the food. Craigie on Main picks up right where Craigie Street Bistrot left off, only with more equipment to play with. The cooking is inspired by the best ingredients the restaurant can get each day, the menu ever shifting and highly local, tastings determined by the chef's whim, pates and confits and rillettes made in house. It's what rustic French food would be after Henry Higgins got through with it. Why change?

Grilled octopus is nearly as tender as lobster, served with cipollini onions, hearts of palm, and chorizo sauce. It's intensely smoky, making this taste like octopus sausage. The texture of the dish is enough to change one diner's mind about tentacles. "I don't know what restaurants have been doing to octopus before, but they should have been doing this," he says.

Macomber turnip potage does vegetarians proud, as does Craigie in general with its meat-free tasting menus. The mellow flavor of the roots is captured, the soup equivalent of single-origin coffee, highlighting one taste rather than many. It is a lot of the same, but spoonful after spoonful it doesn't get old. It's sometimes served with truffles or, for non-vegetarians, a bit of pork.

Foie gras is creamy and rich, highlighted by persimmon puree and pistachios, spread on brioche toast. And an appetizer of Maine smelts with squid ink anchoiade is simple and wonderful, tiny fried fish with an incredible sweetness. They transcend borders; the smelt could be Japanese, Italian, Scandinavian. People all over the world eat food like this, and there's a reason.

Thick, juicy slices of a hanger steak entree are lined up on a plate with smoky, chewy bits of tongue and bone marrow. With the meat, there's chewy, nutty red rice from the Camargue and greens that bring a welcome bite.

Tasmanian sea trout is gently, slowly cooked just to translucence, a fish as pink as salmon served in a pinker citrus sauce with a few tender rock shrimp and fennel-celery salad. The dish is full of bright, light flavors, perhaps to a fault - it's the rare Maws composition that lacks an earthy anchor note.

How many beasts does it take to make an entree of veal sweetbreads? This plate's got the brains and the brawn; it's a giant serving. The offal is accented with an intriguing combination of ingredients: mushrooms, tangerines, prunes, and cashews, with a gel made of the herbal digestif Barolo chinato.

Scallops are large, creamy muscles in a balanced setting: green olive puree, tiny artichokes, cockles, and red quinoa. It's a lovely dish. So is a vegetarian entree of buckwheat polenta enriched with cheese; it tastes nearly meaty, and it comes with a jewel box assortment of winter vegetables and mushrooms.

Dessert keeps up the pace. Particularly good are the gingerbread pain perdu (a.k.a. French toast) and the warm sweet white corn grits. The former features warm gingerbread with a texture reminiscent of bread pudding at the center, spices set off by quince puree and ginger ice cream. The latter is just what it sounds like, a bowl of sweet grits, warm and soothing, spiked with hazelnuts, a compote of dried fruit, and ice cream that tastes faintly of cinnamon. Breakfast for dessert all the time, please.

The wine list is largely French with organic and biodynamic selections. The servers, as ever, are very knowledgeable about it. That is, except for the waitress who describes a Bourgogne blanc as "a chardonnay, but a good chardonnay," then later tells us "mille-feuille" means "1,000 layers." It's a surprising departure at a restaurant where servers usually err on the other side, providing a surfeit of detail, all accurate, with an earnestness that indicates they're drinking Craigie's biodynamic Kool-Aid in great draughts.

And why not? This is a place for people who love food to revel in it, diners and staff both. Craigie on Main makes it relatively accessible, with several different levels of dining, from lower prices at the bar, a three-course neighborhood menu (smelts, roast chicken, chef's choice of dessert) for $38, and Sunday brunch on up to a $115 10-course tasting menu.

Pride can sometimes come across as horn tooting here - a list of the local growers the restaurant relies on invites you to take the page home; a line at the bottom of the menu reads "If it's on the menu tonight, it was the best of the market this morning (menu printed at 5:09 pm today when we received, inspected, and approved our last food delivery)." Food is oversalted with some frequency, and occasionally complexity muddles the flavor of a dish.

But this is Kool-Aid worth drinking, above ground, with the kitchen out in the open and the windows looking onto the street. Craigie was never much of a secret, and now everyone can see why.