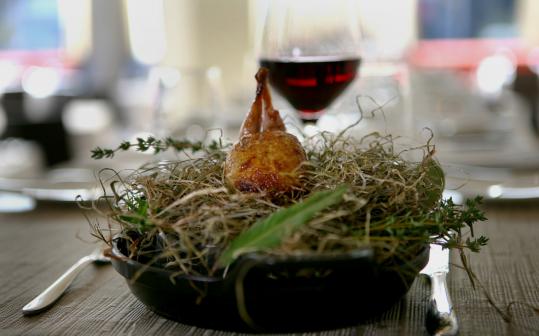 It's the natural order of things: The appetizer amazes, but the meal loses some interest with the entree. The chef takes risks on the small plate, with unusual ingredients, preparations, and flavors, then plays it safer on the big one.

Bina Osteria reverses the natural order. The food, nuovo Italian dreamed up by chef Brian Konefal (Eleven Madison Park, L'Atelier de Joel Robuchon), gets more interesting as the meal progresses, rather than less. It's the "Benjamin Button" of restaurants.

First, antipasti: very good. Beef tartare is one of the better choices, dry-aged River Rock meat topped with a cloud of celery root mousse, adding creaminess and a light vegetal flavor. An autumn salad is a satisfying combination of roasted sunchokes and hazelnuts with a pillow of fresh green mache on top.

"Pollo e pesce" features tuna sashimi spread across the plate; when you eat the red slices, you realize some of these things are not like the others. There's tomato confit in there, a surprisingly good match with the fish in terms of both color and flavor. Capers and chicken-infused mayonnaise complete the dish.

A dish called "3 from the sea" features one oyster, a bit of tuna tartare with sliced radishes, and a tiny cup of soup made from white beans and lumache (a.k.a. snails). Order one of these plates and your waiter is likely to frown. "That's not great for sharing," he may say.

This is true, as each component of the dish is one or two bites big, but you can be bigger than that and work it out amongst yourselves. On one occasion, our waiter offered a second oyster, for which we later found he'd tacked $2.50 onto our already $13 appetizer. This seems a perverse approach when some restaurants are practically giving away oysters in order to lure economy-challenged diners. But economy-challenged diners are not the main concern of Bina, located in the Ritz-Carlton residences.

Worth mentioning when talking about the early stages of a meal at Bina is the spread that comes with the bread. It looks like Crisco, and it is, in fact, lard. At Bina, it's called pig butter, a term that might have been devised via focus group by marketers looking for the most appealing food term ever. Sprinkled with coarse salt, served with little branches of herbs, it's an excellent crushing of oil and butter's plan for world domination.

Next, primi: very good to astonishing. Risotto is al dente, with the deep flavor of wild mushrooms, studded with crispy nuggets of sweet bread, all wintry richness.

And then two of the best dishes on the menu. Carbonara, fresh pasta topped with a slow-cooked hen egg, pecorino sauce, and house-made pancetta; stir together and each mouthful tastes golden, infused with yolk and cheese and bits of pork. It's dreamy.

Gnocchi are the tiniest, most tender little bites. How do they make them like that, nearly as fluffy as snow? In the freezer. Someone bundles up and heads into the walk-in to form them; the cold helps keep the texture consistent. Is this sort of like making pie dough with the coldest possible butter? They're combined with bright Meyer lemon confit; clams; pieces of lobster; the tiniest, most tender little rings of calamari; and brittle chips made from baked slices of chorizo. The textures and flavors put this in the gnocchi hall of fame.

Primi come in two sizes, so one can order pasta or risotto as either a first course or an entree. On one visit, our waiter tells us the smaller option is a "tasting size," not enough to share. This may be a reaction to previous customers complaining the dishes are too small. They're not - the portions are Italian in size rather than American; you won't find heaping plates. Which may be to say: It's the right amount of food rather than too much.

Entrees, too, are big only in flavor, and astonishing more often than not.

Chicken marsala mocks other chicken marsala you may have experienced. The meat is exceedingly tender, stuffed with black trumpet mushrooms, and set atop a brown onion puree, the best part of the dish with its intense cipollini taste. On top of the tender meat, reminding you that at some point flames were used to create this dish, is a piece of crisped, flat chicken skin.

Quail is cooked in hay and brought to the table on a bed of it in a cast iron skillet, proof again that this dish comes from a kitchen rather than a museum. After you admire the bird snuggled in its nest, the skillet is squired back to the kitchen. The quail reappears moments later on a stark white plate beside a piece of perfectly seared foie gras, a smear of pureed chestnuts, and a few Brussels sprouts. The hay may add more in terms of presentation than flavor, but presentation is a kind of seasoning too.

Crispy suckling pig confit is another minimalist presentation: a little square of meat (one diner refers to it as a "pig brownie"), set beside a few turnip segments and a comet of apple puree. The confit explodes with pork flavor, tender and topped with a cracklingly crisp layer. The flavor of the turnips and the apple puree are concentrated and complementary.

I'm not sure whether I like this dish or the lobster with lardo better. The meat of the crustacean is wrapped in white pig fat, an update of fish wrapped in bacon. This creation is cooked to tenderness, the flavors melding, then sliced into coins and served with lentil puree, carrots sculpted into spheres, and fried sage leaves. It is uncannily good.

How does Konefal achieve such luminously tender food? It's either magic or sous vide. In this technique - a favorite of, among others, chefs Daniel Humm of Eleven Madison Park and Robuchon - food is Cryovac'd and cooked in a water bath, often at low temperatures for long periods of time. (Health departments aren't huge fans.) Some find it elevates flavors and textures; others miss the flavors and textures created via more traditional methods. By phone, Konefal says he has done a lot of sous vide cooking throughout his career; at Bina, he says, many things are "slowly cooked."

Dessert, prepared by pastry chef (and Konefal's wife) Paola Fioravanti, can be as interesting as the savory courses, if less often as successful. A moscato mousse is like a cream soda for grownups, foamy and nose-tickling, combined with orange sorbet and honey cream. It's served over sumac meringue cookies, which have the texture of moon rocks, in a glass too narrow to navigate easily with a spoon. If you can get a bite with all the ingredients at once, it adds up to something good; separately, the elements don't work. A pear and almond tart sounds cozy, and it is, in the same way a Bertoia chair is. You can sit in it comfortably, but it sure doesn't look like a . Almond cream, praline sable, and poached pears float in chai consomme, topped with pear sorbet and a delicate tuile.

The wine list is expectedly full of gems - expectedly because Bina's owners are Babak Bina and sister Azita Bina-Seibel, who also own Lala Rokh and the wine-centric Bin 26 Enoteca. The list begins with a mission statement: They promise delicious Old World wines that evoke terroir, and that's what they deliver. Bottles are presented by color and origin, an explanation of each country's wine system at the top of the page. Intrigued by Nebbiolo? There are seven versions to sample. Cocktails make frequent use of bitters; several contain unusual savory ingredients such as Tabasco or tomato water.

The room matches the food with its modern feeling: bright, white, and open. A lounge area features orange couches possibly designed by the love child of Florence Knoll and George Jetson; there's a private side room with cognac leather seating separated from the rest of the space by sheer, shimmery curtains. The ceilings are covered in panels that look like recycled Storm Trooper; trance-y music plays. Black chairs are pulled up to tables draped in white linens, and there's a long strip of counter seating. One recent night, the restaurant had a blackout - handled professionally, with offers to send diners to Bin 26 - and the dimmer lighting that resulted was something of a relief. Some find the decor stark, others think it feels like Milan.

Dining at Bina can be expensive; a prix fixe of antipasto, primo, secondo, and dessert is $67. If you're drinking, with tip, you'll probably break $100 per person. Is that outrageous in these times? For the quality of food and level of cooking, no. And you can eat here for less if you opt for a simpler meal, say pasta and a glass of wine at the bar, a good option to have in this location.

But it's likely that, for the time being at least, we'll see fewer and fewer restaurants like Bina opening. Let's hope, for the sake of the economy, that looking back this review doesn't read like an elegy for high-end dining.