A touch of New England in a French treat 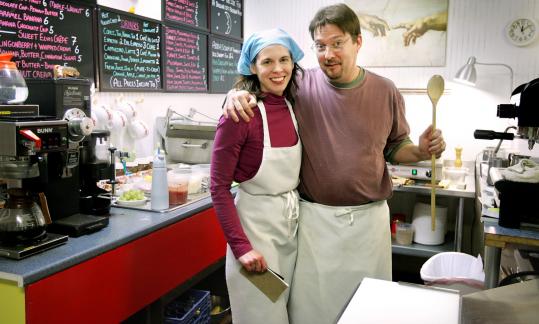 DOVER, N.H. - At Silver Moon Creperie, a crepe may come to you folded into a triangle or looking like two little heated blankets with an assortment of blended, melted, and sweetened ingredients carefully tucked in. Either way there's no filling spared.

This is a treat for the locals and for travelers en route to North Conway and parts north, who gather at the warmly lit, comfy eatery with a cup of strong Vienna roast coffee or hot mulled cider. They can peer over the counter as Chris Therrien pours batter onto a custom-made cast-iron griddle and smoothes it with a few twirls of a wooden rake. Therrien and his wife, Theresa, have run this spot, which is down the street from the train station, for the last two years. Their crepes are a blend of New England and French cuisine. These delicate pancakes have a distinct regional pedigree, with fillings like maple walnut, pumpkin spice, caramel apple, Maine blueberries and honey, and even Fluffernutter.

At Silver Moon, native ingredients mix particularly well with French technique. Maple walnut is a "traditional flavor, but never seen in a traditional crepe," says Chris Therrien. "Maple syrup is rare in Europe, whereas here it's common for French Canadians and New Englanders to use instead of cane syrup." Therrien studied at Johnson & Wales University, and also has a master's in European history. His restaurant experience includes eateries in New York City, New Orleans, and Providence.

"This is the most [authentic] dough I've come across," says Karin Tate, a Cambridge resident enjoying the butter-and-sugar crepe she calls "the classic." Therrien says even the flour he uses is local - Acadian light buckwheat from Maine's St. John Valley, mixed with all-purpose wheat flour.

Tate says that the only difference between Silver Moon's crepes and the ones she knows from having lived in Paris for five years is "in Paris they come rolled in paper."

Theresa Therrien often serves a crew of chefs and wait staff who descend on Silver Moon before heading for a shift in Portland, Maine, an hour away. "It's something different for everyone," she says. The array of choices and fillings inspires some to work their way through the menu over time. It's easy to fall into a comfort zone with crepes. But at $6, there's no reason not to move from maple walnut to banana creme to dulce de leche in a single sitting.

"They're phenomenal," says Bruce Anderson of his cinnamon-and-sugar crepe. Anderson, who teaches environmental science at Boston University, says he had avoided crepes because his father, of Swedish heritage, used to make them Sunday mornings. "I didn't think anything could compare." What Anderson will not try are the lingonberry and whipped cream crepes, because his dad always made them with sour cream. The berry-filled pancakes are on the menu at the suggestion of another customer who brought in a jar of the berries. Others have brought their own fillings as well.