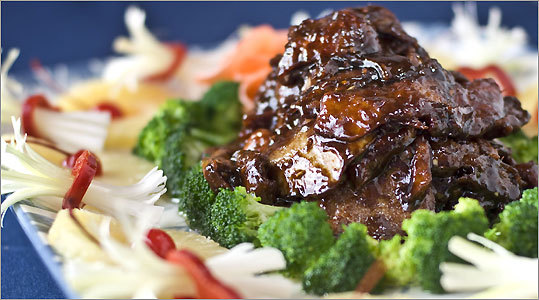 Jiang pao duck features pieces of duck on a platter with scallions, cucumber, pancakes to roll it all up in, and a sweet bean sauce. (Globe Photo/Wiqan Ang)
By Devra First Globe Staff / September 17, 2008
Text size – +

To begin with an analogy: You know how sometimes you read a novel, and you savor the use of language, the subtleties, the descriptions, and it becomes one of your favorite novels? And then, some time later, your favorite novel is made into a movie. Whether against your better judgment or in full excitement, you go see that movie. And your favorite novel is barely visible on-screen: The plot has been simplified; the original, beautiful language is mostly gone; the spunky heroine has been turned into an unspunky sidekick . . .

That, in essence, is what often happens to Chinese food in America. One of the world's great culinary traditions is rendered as the movie version: beef with broccoli in brown sauce. How do you make a banquet out of that? Chinese food is lumped with pizza in our minds, cheap takeout. Sometimes this is apt, as at restaurants purveying sops for grease and MSG in fluorescent light, sustenance for the drunk and the studious at 2 a.m.

But sometimes the novel makes it to the screen intact. Sometimes we get to eat Chinese food that's not the movie version but the real deal, featuring dishes from the eight main regional cuisines that have nothing to do with crab rangoon or General Tso's chicken.

Fuloon in Malden offers many such dishes, and also crab rangoon and General Tso's chicken, if you must. But really, you mustn't, because the Shandong, Sichuan, and Mandarin specialties are the reason to come here. The chef, Zhang Wenxue, used to cook at hotels in Beijing. He emerges occasionally from the kitchen (he's the one with the long hair who looks like a musician or an artist) to converse with guests in the dining room, simply but prettily decorated with a fish tank, zodiac-themed paintings, and other objets. Muzak versions of "Scarborough Fair" and "The Way We Were" play on a not-very-long loop. Some nights when you hit Fuloon it's very good, but some nights it's great.

At many Chinese restaurants, the best stuff is listed only on the Chinese-language menu, and it can be hard to get your hands on it. Fuloon makes it available to English speakers. There's a section of the menu labeled "most popular," and a section labeled "chef's specialties." There's also a picture menu for the popular dishes. So you can see, for example, that steamed beef, Szechuan style, basically looks like a vat of chili peppers swimming in chili lava, and decide whether it's for you.

The steamed beef is, in fact, a vat of chili peppers swimming in chili lava, served in a blue-and-white bowl. There's some beef in there, too, of course, and it's very tender. But if you are not an extreme lover of heat, this dish - albeit a delicious one - is to be avoided. I am a recreational user of the chili, and it was too much for me. Beneath the heat, there is complexity, but you have to do a lot of sweating to experience it. We termed this dish "The Giant Bowl of Death" and gifted our leftovers to a champion chili eater. She happily ate it for breakfast; afterward, someone asked her why she was twitching.

A warming but less incendiary experience can be found in a platter of crabs with garlic and red pepper. They come in a pile, coated with chili flakes, ready to be dismantled with crackers, chopsticks, and fingers. It's messy work - we go through 17 napkins and seven wet wipes - but it's worth it. The sweet crab meat plays against the chilies in an addictive combination. Our eyes tear and our upper lips go numb, but we persevere. With a cold Tsingtao, it's one of the most satisfying meals I've experienced in a while.

Fuloon features subtlety with its heat. The soupy bean curd with special sauce is something I will crave all winter, soft billows of tofu floating in a sauce that is, yes, spicy, but also multilayered: slightly numbing, a little garlicky, and studded with bits of peanut for texture. Over rice, it's comforting and intriguing at the same time. Mandarin cabbage with chili pepper pulls off a similar feat, only with crunch instead of silkiness - the leaves are layered with chili sauce and taste slightly pickled. It's smoky and spicy and tart.

Diced chicken with dates and chestnuts is a perfect fall dish, the poultry interspersed with peanuts, red dates, and roasted chestnuts. Full of round and nutty flavors, it's sweet but not too sweet.

Likewise yu hsiang eggplant. The sweetness is balanced by sourness in the sauce, and the eggplant is custard-like inside, crisp and caramelized on the edges. Jiang pao duck features pieces of tender, fatty, melt-in-your-mouth duck on a platter with scallions, pieces of cucumber, pancakes to roll it all up in, and a sweet bean sauce for dipping. It's delicious, though the pancakes are a bit tough, like tortillas.

The jingdu pork pancake redeems Fuloon's pancake karma, however. This is like a cross between a scallion pancake and Peking ravioli. You get the crisp-chewy pancake part, but it's stuffed with savory pork. You dip the triangles into an almost balsamic-like black vinegar that cuts the fat.

Bean curd leaf with pork is another intriguing pork dish - slabs of belly that melt in your mouth, interspersed with tofu skin tied into knots. The slightly sour flavor and chew of the tofu goes well with the pork.

Wok-baked beef arrives at the table in a sizzling black skillet, the meat laced with cilantro. As it cooks, the beef crisps slightly on the outside yet remains absurdly tender. It's tasty and texturally excellent, but I find its brown sauce somewhat uninteresting.

I'm in the minority on that one. This dish - like Fuloon itself - has garnered a large following via the Internet. The clientele is often largely Chinese, but the restaurant's online presence is bringing in ever more Americans, says co-owner Diane Tang later by phone. In the restaurant, Tang offers helpful advice to the uninitiated, making sure you order a good balance of dishes. With each meal, the waitress becomes friendlier and readier to provide you with spicy food. On an early visit, she warns us with concern that the crabs are spicy, but several dinners later she's bringing us the Giant Bowl of Death with a big smile on her face.

For dessert, sesame rice balls cool the tongue: sticky, chewy rounds made from glutinous rice, filled with grainy, sweetened sesame paste, floating in the water in which they're cooked. After that, fortune cookies arrive with the check: a sweet familiar note at the end of a symphony of regional flavors.