THIS STORY HAS BEEN FORMATTED FOR EASY PRINTING
Dining Out | Townsend's, Hyde Park

Welcome to the neighborhood 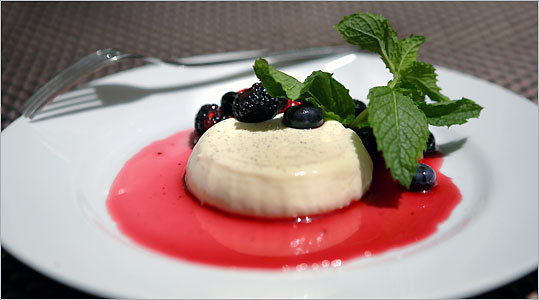 I went to this great restaurant in Hyde Park the other day.

Come again? Hyde Park has many things going for it: mom-and-pop businesses and a small-town feel, a Donald Ross golf course and the Riverside Theatre Works (and, despite several recent shootings, an overall crime rate lower than that of many other Boston districts last year). But it doesn't exactly have great restaurants. According to the nonprofit Hyde Park Main Streets, an MIT survey found this to be the type of business respondents most wished would come to the community.

It stands to reason, then, that residents would start one. Michael and Rosaleen Tallon opened Townsend's in April, a space with dark wood, warm colors, a spiffy little bar, and a stone fireplace. Risking the mirth of certain Hyde Park old-timers, I will hereby apply the term "gastropub" to the place.

Townsend's is what happens when rock club owners grow up - the Tallons were the team behind live music venue the Kendall Cafe. Townsend's is easier on the eardrums and the food is better, but the genuine feeling remains. The Tallons greet guests and deliver beer, and the servers are chatty and friendly.

Chef Stephen Hoddinott matches the tone with approachable, expert renditions of classic Irish pub food, plus a few surprises. It would be a shock if fish and chips didn't make an appearance, and they do: the fish in a light, greaseless batter, atop a pile of golden-brown chips. It's an excellent version. Shepherd's pie is here, too; savory and filling, it looks like a meat cupcake topped with fluffy potato frosting.

A plate of hummus, olives, and flatbread is less expected, however. The hummus is fine, and the olives are great - a generous pile of many varieties, warmed with herbs. The chef's snack selection offers chunks of nicely spiced black pudding (one of the gentlest culinary euphemisms) and mustard, plus slices of sharp, crumbly cheddar. Yet what appear to be pieces of apple beside the cheese - a classic pairing - turn out to be Asian pear.

Mussels are plump and plentiful, in a rich, garlicky broth made with Smithwick's ale. We sop it up with sticks of toasted (and occasionally burned) focaccia, but if I had a spoon I might slurp it straight. Bluefish cakes are too heavy on the filler.

A crisp-skinned chicken entree is served with roasted Brussels sprouts and champ, whipped mashed potatoes with shaved spring onions that one-up their American cousin in flavor and texture. It comes with "Mom's chicken gravy," which tastes appropriately homemade.

That gravy also comes with a side of poutine. Note to the Quebecois: Don't go there. You'll find it a sacrilege. The fries-and-gravy dish, traditionally served with cheese curds (often at 1 a.m. to people who may not walk the straightest line to the counter), is made with cheddar at Townsend's. It's tasty. It's just not poutine.

Even faux poutine demands beer, however. And Townsend's has lots: 20 on tap, plus nearly 40 bottled. Oh, and it's within walking distance of the commuter rail.

For dessert, banana bread pudding is gooey and good, the bananas topped with crunchy caramel. And a vanilla panna cotta is spot-on: just a simple, quivering custard, flecked on top with vanilla and served with berries.

At its best, Hoddinott's cooking brings just enough refinement to comfort food. His light touch may come in part from the influence of Jeffrey Fournier, who runs the excellent 51 Lincoln and consulted on Townsend's; Hoddinott has worked with him for years at various venues. Townsend's seems to have found the perfect formula for the neighborhood - it's busy, even on a weeknight.