Smothered chicken for the soul at Poppa B's 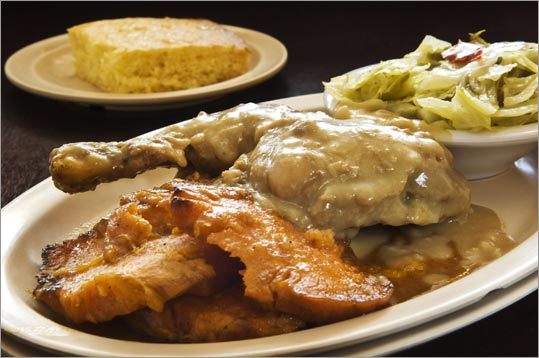 On a Friday evening at Poppa B's in Dorchester, the opening notes of a Chaka Khan song waft from the restaurant speakers, and diners pause. Forks midway to mouths, heads cocked, smiling dreamily, people at each table stop eating, just for a moment, to sing along. "Baby baby when I look at you, I get a warm feeling inside." At the end of the work week, a serving of soul food and R&B hits the sweet spot.

"There's something 'bout the things you do that keeps me satisfied." OMG. Chaka, you were totally singing about food, weren't you? Until I heard this song midway through a meal of Poppa B's fried whiting, smoked chicken, ribs, and all the fixings, I thought it was about something else.

Poppa B's serves soul food that is uncommonly delicious, and it does keep you satisfied. On a Sunday afternoon, for example, two diners who'd been filled with the holy spirit at one of the many nearby churches found they had a little room left over. For lunch: smothered chicken, cabbage, candied yams, and grits for one, chicken and waffles for the other. Hallelujah. Six hours after cleaning their plates, they compare notes: Still not hungry.

Because it's not enough to simply batter and fry the dark meat, Poppa B's then douses it in smoky gravy. This smothered chicken - moist, rich, its deliciousness bypassing the brain to directly permeate the nervous system - is exactly what soul food should be. As in, pleasing to the soul. It, like all of the plates, comes with two sides and cornbread. Cabbage is cooked just long enough to take on a silky texture, but not so long that you can no longer identify it as cabbage. The candied yams taste like Thanksgiving, sweetly spiced and loaded up with butter. Grits, too, are buttered up - slightly chewable, not just mush.

Chicken and waffles, on the other hand, isn't Poppa B's best event. The fried chicken breast is a bit dry, confirming the hypothesis that it is not worth 50 cents extra for breast meat, because dark is always going to be juicier. The waffle is flat, not fluffy; it's good, just not extraordinary. But combine crisp-battered meat, a buttered waffle, and syrup, and it's hard to go too far wrong.

A subsequent test of Poppa B's fried chicken, this time the dark meat, provides better results. It's no longer dry, and the batter's wonderfully crisp, though it could use more seasoning. When it comes to fried, though, at Poppa B's we prefer the whiting plate. The thin piece of fish is still moist, with an incredible crunch to the crust. The taste of cornmeal in the batter comes through over the taste of frying. "This is like tempura for black people," exclaims one diner, who was reared on fried whiting that didn't quite taste like this.

That's not to knock his mother's cooking: She knows her way around the soul food repertoire. It's just that Poppa B's food, he confesses in a guilty whisper, is almost, almost, as good as hers. The restaurant's fare should feel sinfully heavy, with pork and butter taking starring roles. And yet it seems light. Eating it, you never get the feeling that you've swallowed a sandbag, or that your arteries are gasping, "Please, for the love of God, spare us." (Though your arteries may, in fact, be gasping this.) Which is not to say that a nap doesn't seem appealing afterward.

Particularly if you order the smoked chicken and ribs combo platter. You get your choice of pork or beef ribs; they are succulent, tender, the meat pulling easily off the bone. The smoked chicken has great flavor, the woody aroma of the meat complemented by the tomato-based barbecue sauce, sweet with molasses and tart with vinegar. (The Georgian at the table scoffs - a barbecue purist, he doesn't believe in sauce on top.) When it's gone, the sassy server says, "Oh my goodness, I can't believe you ate all that by yourself!" Grilled liver and onions is also good, the liver chewy and strong-tasting.

Some might argue the sides make the soul food place, and Poppa B's stands out particularly for its collards. Like the cabbage, they're not stewed into oblivion, but they are soft and flavorful, laced with shards of pork. Macaroni and cheese can be variable. Get it when it's cold and it's disappointing, but get it when it's hot and it's cafeteria-style great: smushy noodles welded together with melting orange paste. Cornbread tastes prefab but pleasant, studded with kernels, and sweet and cakelike enough to ignite the old debate about what cornbread ought to taste like.

Desserts tend toward the sweet and simple: Southern classics such as 7-Up cake, peach cobbler, pecan pie, and banana pudding. There's also sweet tea, a mouth-filling, just-on-the-verge-of-too-sweet drink that puts you psychologically on a sunny porch, even when it's a rainy night in the North. Poppa B's serves breakfast, too, the kind where biscuits come with a side of toast. The restaurant opens early, 7:30 most days, so you can start your morning with an eye-opener like Rico's Buffalo Soldier Breakfast (sausage, two buttermilk pancakes, three eggs, grits, and biscuits or toast) or the Low Country Special (biscuits and gravy, two eggs, grits or home fries, fried apples, and toast).

It closes early, too. The restaurant, opened two years ago by father and son Boyce Slayman and Boyce Slayman Jr. and largely family-run, was "created to be a cornerstone of our community," its website says. Slayman Sr. is a longtime community activist, and Slayman Jr. grew up not far from the restaurant, which is located on the Mattapan border. A pleasant space with dining on two levels, decorated with paintings of musicians, Poppa B's counts politicians, clergy, and other local power brokers among its regulars. But the hobnobbing ends when the sun goes down.

It's not alone in these hours. Uphams Corner soul food restaurant Chef Lee's II closes at 6:30, and Mrs. Jones in Lower Mills at 8. The United House of Prayer Kitchen, a church cafeteria in Roxbury, closes at 4:30 on weekdays and 6 on weekends (perhaps the only place in town where you can eat pork ribs in a onetime synagogue). Ray's Soul Kitchen in Dudley Square, open till the comparatively bleary-eyed hour of 11 on Friday and Saturday nights, is a notable exception. But since the closing of jazz club/restaurant Bob's Southern Bistro (formerly Bob the Chef's) last year, the city's supply of fried chicken, catfish, and collards cuts off just as things get cooking. Soul tends to go to bed early in Boston. At Poppa B's, just as Chaka Khan is hitting her stride, a staff member bustles through to lock the door from the inside. There's no rush, she assures you, but it is time to close.