THIS STORY HAS BEEN FORMATTED FOR EASY PRINTING
Sauce

All on deck for some seafood fun 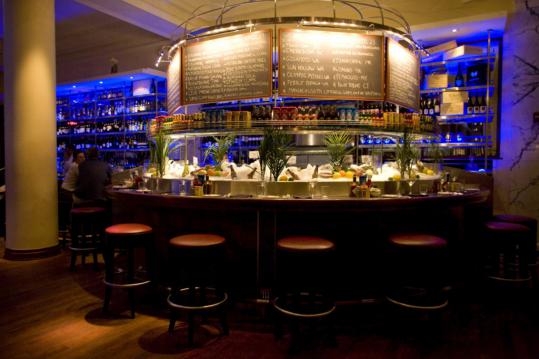 An early taste of what's new on the restaurant scene

Here's the trick to giving your restaurant a fun, retro vibe: It has to be carried out all the way. If you're going for good-time nostalgia, it should be reflected in the ambience, the décor, the food, and the pricing.

The Oceanaire Seafood Room, a new fish-lover's mecca that opened in January near Government Center, has half of the equation down pat. The place is fun, even a little kitschy at times, but at heart it's an upscale restaurant that takes its menu seriously with prices to match the quality. It may seem like you're in a time warp, but $40 entrees will snap you back to today's economic reality.

Oceanaire aims for a very specific sense of time and place - "a classic 1930s ocean liner" where you can "lose yourself in a classier era of Americana," according to its website.

That explains peppy Ella Fitzgerald tunes on the soundtrack, vintage grooming products like Vitalis and Old Spice in the men's restroom (but what's up with the Aquanet hairspray?), a cocktail menu with faded stars such as the Harvey Wallbanger, mounted fish on the walls, and canisters of Old Bay seasoning on the tables.

It occasionally feels like it could be part of a chain, which it is. The first Oceanaire opened in Minneapolis, and now there are 15 restaurants spread throughout the United States. This new outpost is the only one in New England, and if it can lure tourists to its quiet corner on Court Street, it could be a huge success. (It already has an advantage: Duck Boat tours zoom right past it.)

True to its vision, the Oceanaire does look and feel like a movie set, the kind of place where Frank Sinatra might have dined when he was in town. Housed in a former United States Trust Bank built in 1930, the restaurant is expansive with a wide-open bar area backlit with blue lights and a comfortable dining room with high ceilings and tall windows with wooden shutters.

You'll get a spiel as soon as you sit down, as well as an amuse-bouche such as pickled herring or perhaps ceviche on a tortilla chip. The Oceanaire, we were told earlier this week, is an "ultra-fresh seafood restaurant," meaning everything pretty much arrives that morning or afternoon.

At the top of executive chef Dan Enos's menu, which changes daily depending on market availability, is an impressive array of sea delights: New Zealand moonfish, Point Judith calamari, Georges Bank sea scallops, and so on; the ones with the check mark beside them are available that day. That's in addition to the soups, salads, and options from the oyster and raw bars.

Once you've chosen your fish, you decide how you want it prepared - grilled, broiled, or as one of the specialty entrees. On our visit, there were 25 kinds of fish offered. That was almost too much, but we didn't go wrong with any of them. The seared, wild Alaskan halibut, meaty and moist, was the best I've had in months, cooked simply and matched perfectly to a vegetable risotto in a little pool of basil-lemon drizzle.

Likewise, a whole lobster stuffed with crab was a spectacle to behold, and even better on the palate. Scallops crusted with foie gras were almost too rich to finish, but the yellowfin ahi tuna was lightly grilled and redolent of its kalamata vinaigrette.

If you don't eat seafood, which would be a mistake here, there's a small variety of steak offerings, including a delicious 7-ounce filet mignon. Or, as the vegan in our group discovered, you can make a meal from the side dishes (the edamame succotash and salt-and-vinegar matchstick fries were particularly addictive). Just keep in mind that the sides, like all of the a la carte entrees, are massive, suited for the whole table and served family-style.

By the time our waitress was setting aflame our dessert of baked Alaska (how 1930s ocean liner!), we had been at the Oceanaire for two hours and the old-school vibe had come full circle. Yet another Ella Fitzgerald song played overhead, but then the check arrived. Back to 2008.